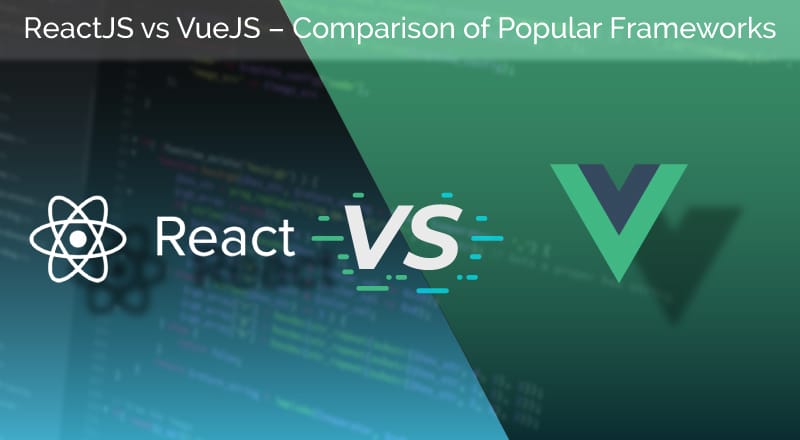 According to one Statista survey,

JavaScript is the most widely used programming language among software developers worldwide with 62.5 percent of respondent ratio.

Over recent time, JavaScript has gained in popularity and many tech giants are reaping the benefits of it. A plethora of frameworks and languages are taking place day-by-day and we can’t keep up with all of them. It is pretty hard to decide which ones are worth paying attention to.

The JavaScript world is moving faster than ever before and as being a prominent software development company, we can’t afford to overlook the most discussed frameworks of this era – ReactJS and Vue.js. So, in this comparison guide of Vue vs React, we will help you select the best framework, based on the significant pros and cons of each, along with market trends and insights. We have a skilled pool of resources who keep themselves updated on every aspect of Vue.js application development and react development.

Let’s dive into the details:

Before you read further, ensure that you clearly understand what React and Vue.js are. They are highly valued and widely used JavaScript frameworks for interface design.

What Is React? Why Is It So Popular?

React is backed by a Facebook community and it makes it super easy to build interactive UIs.

Keep in mind that, React isn’t an MVC framework.

There are many JavaScript MVC frameworks in the market which are doing a pretty good job in terms of performance and reliability. Despite those, why React has gained so much popularity? Why would someone use React rather than relying on some other MVC framework?

React is a library for creating reusable and attractive UI components. It is very suitable for the components which represent data that changes frequently. With React, you can build reusable user interfaces by breaking them into components instead of using templates or HTML.

React’s official website has mentioned this key feature that says that you can build mobile apps in JavaScript using React Native framework.

React also presents the use of JavaScript XML – JSX which is a syntax extension to JavaScript. React doesn’t necessarily need JSX but it is easy and helpful in the creation of UI components and debugging.

As they have mentioned, Vue or Vue.js is a progressive framework for building eye-catchy UI for the web. It was initially released in 2014 by Evan You, a former Google developer who used AngularJS and decided to exclude the pain points of the Angular and build something lightweight.

There are lots of reasons for its popularity and one of the key reasons is its ability to re-render without any action. It allows you to build reusable, small, yet robust components and hence, offers a composable framework that lets you add components whenever required.

Who Is Using Vue?

React vs Vue: Who Wins The Battle?

There are many similarities between these two frameworks such as,

Certainly, there are differences between these two tools. Each framework has its own advantages and disadvantages to consider. Let’s have a look at each framework one by one.

Be it a web or native development, React is ideal for the majority of the platforms for user interface design.

Now, let’s move to Vue.js and talk about its benefits and drawbacks:

In comparison to React, Vue js has a very less number of downloads and it is mainly popular for building attractive single-page applications and web applications. However, Vue.js features an adaptable architecture which makes it one of the widely used frameworks with officially up-to-date libraries and packages.

Vue.js framework still shares a very small market share in comparison to Angular and React. It is becoming popular at a fast pace but, at the same time, one can have issues in the large-scale app development in this initial phase of Vue.js.

Well, vue.js has the potential to achieve milestones in web app development considering its modern features, speed, and flexibility.

Vue Js vs React: Which Is Better, When, and Why

When you compare React and Vue, speed can’t be a significant comparison factor in deciding which is better. In terms of performance, let’s consider a re-rendering feature. React’s mechanism triggers the re-render of an entire component tree when the component’s state is changed. You may need to use extra properties to avoid unnecessary re-renders of subcomponents.

While Vue’s re-rendering feature is out-of-the-box. Vue offers optimized re-rendering in which the system keeps track of dependencies during its render and works accordingly.

Re-rendering of Vue is the most distinguishing feature which makes it a widely embraced framework by developers across the world.

React uses JSX – a declarative JavaScript XML that allows developers to write components leveraging the power of JavaScript, while Vue.js uses HTML templates to create views. This leads to fewer advantages, such as,

HTML-based templates are much more familiar and it is also beneficial in terms of revamping the existing application to gain the benefit of Vue’s reactivity feature. This provides an easy learning curve for beginners and experienced professionals as the majority of them have worked with HTML in one or another way.

However, this is true that you require learning DSL (Domain Specific Language) to write templates that are almost as equal as you learn JSX – additional syntax on plain JavaScript.

In component-based frameworks like React and Vue, you need to pay more attention to the state management and data flow as you begin scaling up an application. This is because there are a number of components are interacting with each other and sharing the data.

In such a scenario, React offers an innovative solution called Flux/Redux architecture which represents unidirectional data flow and an alternative to the famous MVC architecture. Now, if we consider the Vue.js framework, there’s a more advanced architecture called Vuex which integrates into Vue and offers an unbeatable experience.

React and Vue, both have a pretty good development environment. With little or no configuration you can create apps that get you up and running with the latest practices and templates. In React, there is a Create React App(CRA) and in Vue, it is vue-cli.

Both bootstrap tools tend to give you a comfortable and flexible development environment and a superior starting point to get you started with coding.

Cross-Platform App Development: Who Is A Winner?

When To Use Vue js Over React?

When you want a lightweight, faster, and modern UI library for crafting a top-notch SPA(single-page applications), you can opt for Vue.js. It is advantageous for designers who are used to work with HTML. Also, it provides reusability of the components making it developers’ pick to build unmatched user experience in web applications.

When To Opt For React Over Vue.js?

When you are a fan of JavaScript! React has a mature and larger development community of professionals who are dedicated to making it more advanced. React is powered by Facebook which has many use cases, solutions, resources, and projects. Furthermore, React is suitable for large-scale applications and mobile apps due to its grown-up user base. It is clear that if you want to build a mobile app using JavaScript, React Native is definitely a choice.

However, React or Vue – either is a fine option for building modern JavaScript applications and it highly depends on the team, app size, and an approach that is feasible to you.

Here’s a quick overview of the whole evaluation:

Vue is better than React in the following scenario:

React is better than Vue.js when,

Vue vs React: A Quick Comparison

Vue Js vs React – Wrapping It Up:

Whether you choose Reactjs development or VueJS, both frameworks have no considerable differences and this decision is highly subjective based on your requirements. If you want to integrate a front-end JavaScript framework into an existing application, VueJS is a better choice and if you want to build mobile apps with JavaScript, React is definitely a pick.

If you are not clear about the requirements or you have any idea in your mind, we can help you! Yes, we are making digital transformation easier for the majority of the industry verticals through our hands-on expertise and 30 years of experience in custom software development. We ensure that there will be the right choice of the framework according to your needs. We have skilled developers who keep themselves updated with the newest tools and technologies.

What are you waiting for? Drop us a line or call us to discuss your next endeavors.

Here, we have tried not to be biased with any frameworks. We believe, your requirements must be met regardless of the technologies or frameworks. If we are missing any important points or concepts which can make this article more comprehensive and value-added, you can tell us via comments below!