“Machine learning will automate jobs that most people thought could only be done by people.” – Dave Waters

As a powerful science behind machines that can do human-based activities, machine learning focuses on the study of computing algorithms to make the system take decisions without writing manual code.

As per the latest proven statistics, the machine learning market is expected to grow from USD 1.03 Billion in 2016 to USD 8.81 Billion by 2022, at a Compound Annual Growth Rate (CAGR) of 44.1% during the forecast period.

What Is Machine Learning?

Machine learning is a modern-day discipline that utilizes statistics, algorithms, probability to extract the best out of data and offer insightful information that can be leveraged to create intelligent applications. Being a strong part of AI, it has a pool of algorithms and methods that connect the data depending upon the patterns and analytical methods.

Machine learning has a stringent focus on pattern recognition, predictive analytics, data mining and has a close association with big data and data analytics. It has the power to enable machines to mimic human decision-making through mathematical models and advanced prediction statistics.

Good Read: What Is Machine Learning? An Overview In 200 Words 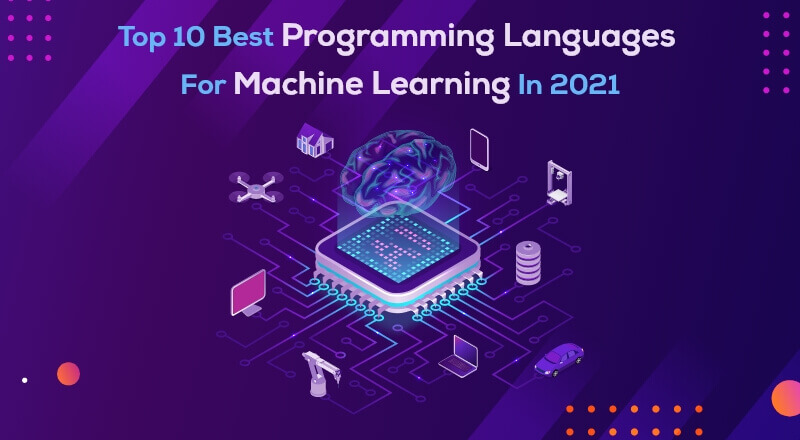 Python is a lightweight, versatile, simple programming language that can power complex scripting and web app if used in an effective framework. It was created in 1991 as a general-purpose programming language. Developers have always admired it as a simple, easy to learn and its popularity knows no bounds. It supports multiple frameworks and libraries making it versatile.

Python developers are in trend since it is one of the most sought-after languages in the machine learning, data analytics, and web development arena, and developers find it fast to code and easy to learn. Python is liked by all since it allows a great deal of flexibility while coding. Thanks to its scalability and open-source nature, it has multiple visualization packages and important core libraries like sklearn, seaborn, etc. These powerful libraries make coding an easy task and empower machines to learn more.

R is a popular open-source data visualization-driven language that focuses on statistical computing and reigns high in the machine learning environment. It is being managed by the R Foundation and R development core team. The USP of R is that it is preferred by professionals who are not very well exposed to coding – analysts, statisticians, or data miners. It offers support to a command line and other IDEs, with ease of coding and multiple tools for better library management and drawing better graphs.

R does have a good resource pool, thanks to its salient features that aid in developing machine learning apps. Its usage for data and statistics has been profound. Effective machine learning solutions can be delivered with its heavy computing capabilities. Being a graphics-based language, it is leveraged by data scientists for analyzing data through graphs, by huge conglomerates, especially in the biomedical field.

R is known for implementing machine learning methodologies like classification, regression, decision tree formation, etc. Because of its statistical and functional features, it has been a dynamic, imperative, functional language. It supports different operating systems like Windows, Linux, OS X.

JavaScript and Java have been multipurpose programming languages that have proven their worth for machine learning applications and algorithms. Known for their stability and reliability, these languages have been object-oriented in nature and support heavy data processing competencies. Java has strong frameworks like Weka, Rapid Miner, etc. that support machine learning algorithms, decision trees, regression techniques, etc. It has been working very well with enterprise-based applications. JavaScript has been an easy language to learn and hence has a good resource pool to look for.

Many high-profile projects of big organizations are based on Java and JavaScript. Considered to be effective for machine learning projects, these technologies take support from the multiple machine learning libraries associated with them. Experts are using them for detecting frauds, cyber-attacks, and for better network security.

Due to its characteristics like package services, graphical representation increased user interaction, Java and JavaScript have a huge fan base in the machine learning circuit. They ensure speed, precision, and accuracy while developing algorithms and interpreting them on dashboards and reports.

Julia is a popular high-level, dynamic programming language that is especially meant for creating effective model analytics needed for developing machine learning applications. As a good performance language, it has an easy syntax and hence is a preferred option for developers. It offers different takeaways like numerical precision, sleek compiler, distributed parallel execution, and a large mathematical function library.

It executes seamlessly on various platforms and is considered interactive when it comes to scripting. Being functional and object-oriented, it has a large fan following and is considered an ideal choice for developing machine learning apps. It is accessible and easily understandable. Under the license of MIT, it is free and open source by nature.

Julia can perform its best on the server-side and client-side, both. It is quite effective while doing computational statistics and numerical calculations. Hence, it is considered ideal for statisticians in the areas of bioinformatics and analytics.

Lisp has been an old programming language that has been popular now for AI and ML-related projects. It is known for its architecture and practices and that is a good reason, developers are for it, especially for artificial intelligence and machine learning applications. There are limitless possibilities that it offers to its developers.

Salient characteristics like domain-specific language embedded with code, building owners, etc. have made it popular. Utilizing its features while creating machine learning applications has been the developer’s delights since there are many chances of doing so.

Lisp has been developed by the pioneer of AI – John McCarthy and hence has its own advantages. It has been proven good for prototyping and facilitates the easy and dynamic creation of novel objects. There is an automated garbage collection feature that assists in running operations smoothly.

Scala is a well-known compiled language that makes the executable code work in a fast manner. It possesses a static type of system that has good compatibility with Java frameworks and libraries. Scala is known to deal with enterprise-level apps with huge databases and a scalable solution. Its USP lies in creating big data-powered applications that carry an enormous amount of data within them.

It has a strong backend language and hence can manage a massive flow of data. Supported by the well-known Apache Spark, Scala offers competitive functionalities through its MLLIB library. It offers developers an effective method of developing, designing, and deploying machine learning algorithms by leveraging Spark competencies along with other big data tools and technologies.

C/C++ are powerful, versatile, and popular programming languages that have been preferred choices for many, across the globe. And when it comes to developing machine learning algorithms, there is no looking back. These have been traditional languages that have ruled the developer fraternity for years and with regular updates, have been abreast of the latest technology moves.

These languages are considered low-level languages and hence are easily readable by the machine. It is easy to offer hardware-level features and hence machine learning apps can easily be implemented on IoT devices. The fast execution and delivery speed make it ideal for such applications.

There are many strong libraries like Torch, TensorFlow, etc. that are implemented using C/C++. They have proven to be useful for performance-critical applications. C++ has the competence to manipulate algorithms and undergo thorough memory management at a detailed level. It offers a great deal of control over different performance parameters.

TypeScript is an object-oriented programming language developed by Microsoft in 2012. It is JavaScript for application scale development. It is considered a good choice for developing machine learning applications through a browser-based library called Kalimdor, which is written in TypeScript. TypeScript begins with JavaScript and ends with the same, supporting JavaScript libraries.

It is a compiled language that is strongly typed. It is considered as a language and a set of tools that basically is JavaScript with some added features and tools. TypeScript has the following components at its core – language, TypeScript Compiler, and TypeScript Language Service.

The major advantage of using TypeScript is that it is a simplified version of JavaScript and hence, reading and debugging it is easier. It offers effective development tools for JavaScript IDEs and different programming practices. The code becomes much simpler to perceive and read.

Go (Golang) has been a popular language with its salient features like open-source nature, owned by Google, and light in execution. It has the capability to encompass big data sets in a simpler fashion with multiple tasks being executed together. Its concurrency is its positive point. It is a system-level programming language and has an in-built vocabulary.

It is considered as one of the fastest-growing languages on GitHub, with a good acceptance level amidst the cloud computing services. Because of its resemblance to C and features like garbage collection, dynamic typing, etc., it is popular in the serverless computing infrastructure.

Go is considered relatively simpler to learn and its easy syntax and security make it easy acceptable by developers.

Shell programming language has been conceived to be executed by the Unix shell, a command-line interpreter. With its scripting languages and wrappers, Shell uses its simple syntax and makes it an ideal choice to develop machine learning models, algorithms, and applications.

Shell, as a user interface to perform operations, uses a defined language and can be quite helpful in data collection and preparation, through mathematical models. Shell is available for all operating systems, including Windows, Linux, and macOS, offering them high-end portability.

Shell commands and scripts are used to collect data and prepare it for further computing. It offers an easy and friendly way to process data.

Machine Learning Has A Bright Future!

Machine learning services and solutions have no looking back. With a plethora of programming languages and frameworks to support it, the world is sure to see newer and exciting offerings from the world of machine learning and artificial intelligence. Let us all be a witness to that!