In today’s software development environment, a plethora of technologies, frameworks, languages, and tools are being used. This is where stack comes into the picture.

A stack is a combination of languages, frameworks, and technologies used in the creation of mobile app development and web development.

Generally, any software is divided into two parts – client-side and server-side, also known as front-end and back-end. The selection of the right tech stack has a great impact on the growth and success of the web application.

What Is MEAN Stack?

It is a set of JavaScript-based technologies/frameworks used in web application development. MEAN stands for MongoDB, Express.js, Angular, and Node.js. MEAN Stack development is widely popular for building advanced and dynamic web apps.

What Is Full Stack?

Full stack is a term that is used to denote the capability of building both parts of the application – front-end and back-end. Full Stack is a broad term and doesn’t refer to a particular software/tool. Full Stack development is considered as an ability or skill to build full (client-side and server-side) web applications. 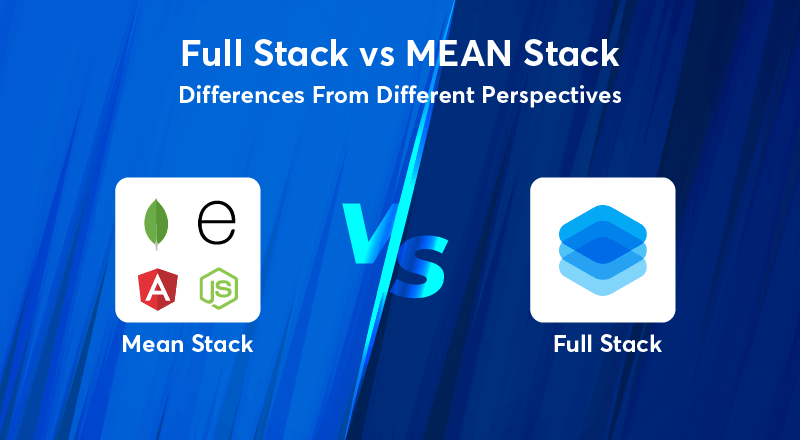 The frontend is the face of the application. It is used by end-users to interact with the website or app. It includes design, user experience (UX), user interfaces (UI), graphics, content, and components that are related to the look-and-feel of the website.

Backend is the backbone of the application. It’s a part that is not visible to end-users neither the processes. The backend is a logical part where data are stored, processed, manipulated, and sent to the frontend for presentation. All functionalities of the website are programmed in the backend. It mainly targets ‘response’ given to users that includes processed data or calculated results.

Both these parts require different technologies yet they complement each other. While frontend requires technologies like JavaScript, HTML, and CSS, backend focuses on database management and server-side programming.

This is where Full Stack and MEAN stack differs.

MEAN stack is one of the popular Full Stack frameworks consists of JavaScript-based technologies like MongoDB, Express.js, Angular, and NodeJS. On the other hand, Full Stack means having a knowledge of developing both – frontend and backend parts of the website.

Full Stack is a broad concept and requires a set of languages, tools, and concepts to learn, unlike MEAN. In MEAN stack, you will require knowledge of 4 frameworks mentioned in this acronym (first letter of each). MEAN is Full Stack because it consists of:

This together makes MEAN a complete web development framework. MEAN has played a significant role in increasing the popularity of Full Stack. This is because, MEAN stack developers are capable of developing a whole web application that includes database management, frontend, and backend using JavaScript-based frameworks.

Full Stack not only requires knowledge of several frontend and backend technologies but also mandates knowledge of deployment, optimization, web design, and automation. They are expected to work on a diverse range of tools and almost everything that requires building modern web apps.

Full Stack developers are high in demand due to its versatile role. Full Stack mainly refers to the skills of developers who can work on both, client-side and server-side. They are responsible for ensuring the smooth performance of the website continuously and also ensure continuous enhancement.

MEAN stack developers must be expert in JavaScript as MEAN is all about JavaScript for backend and frontend development.

MEAN stack developer is expected to have very good JavaScript knowledge. Full stack developers are responsible to handle the entire project from ideation to implementation. They must possess analytical as well as development skills to bring ideas to life from concept to development and deployment.

Full Stack developers are quite fit for a diverse range of projects as they are capable to work on multiple frameworks and languages. Database knowledge is not restricted to MongoDB in the case of Full Stack.

Full stack and MEAN stack developers have their own set of advantages and disadvantages. Let’s see:

What Are The Disadvantages Of Hiring MEAN Stack Developers?

It is certainly a framework that is adopted by a number of leading organizations and utilizing benefits it has to offer but there are several disadvantages of the MEAN stack.

Which Is Better: MEAN Stack Or Full Stack?

Technically, this question simply does not make any sense as MEAN stack is a popular and widely-adopted Full Stack for web development.

As we have always suggested, choosing the technology and approaches depend on requirements along with factors like timeline, budget, and resources. Full Stack is increased in popularity due to its versatile role in this product-driven world. To make your customers happy, you need to develop faster and release faster. And to accomplish this, organizations need skills and responsibilities that save time and achieve goals using innovative and modern approaches. Definitely, Full Stack developers are the most sought-after skill in the upcoming years.