With digital initiatives increasing multi-fold, the software development arena is moving towards a full-stack development trend, and one big name in these technologies is the MEAN stack development. The need of the hour is fast, efficient, and dynamic websites and apps. With so many technologies floating around, it is a tough call to center down to a single option.

At such a time, the MEAN stack has been the latest jargon, and MEAN stack developers are very much in demand. Most industry segments like energy and utilities, retail and FMCG, real estate, shipping, and logistics, etc. have been leveraging the potential of this powerful technology. Let us understand what this technology is all about.

What Is MEAN Stack?

MEAN focuses on a free, user-friendly, and open-source JavaScript software stack to create dynamic websites and robust web applications, with its technology stack. MEAN includes MongoDB (M), ExpressJS (E), AngularJS (A) and NodeJS (N). Right from the client to the server and back, everything is dependent on JavaScript. It gives an organized way to create faster prototypes for web-based applications.

MEAN stack has been considered the ideal choice for hybrid app development with full-stack JS and it assures a quick and competent software output. Its open-source nature, utilization of a common language on both – client and server-side, well-organized technology setup, and flexible development model are key reasons why developers are keen to garner expertise in this technology.

The four fundamental technologies that comprise MEAN are:

MongoDB – It is a popular, cross-platform database written in C++. A single document in MongoDB looks like an object in OOPS.

ExpressJS – It is a mature and light-weighted server framework that is specially created to build single and multi-page web applications. It makes use of the Pug engine for giving support for templates.

AngularJS – As an open-source web and mobile application framework operated by Google, AngularJS has been influential in enabling both the development as well as the testing of apps with MVC and MVVM architectures.

NodeJS – It is one of the world’s best performing & versatile platforms, organizations – startups, SMBs, Fortune 500 companies seek its utilization for building a variety of web, mobile, and desktop applications, inclusive of full-stack development. 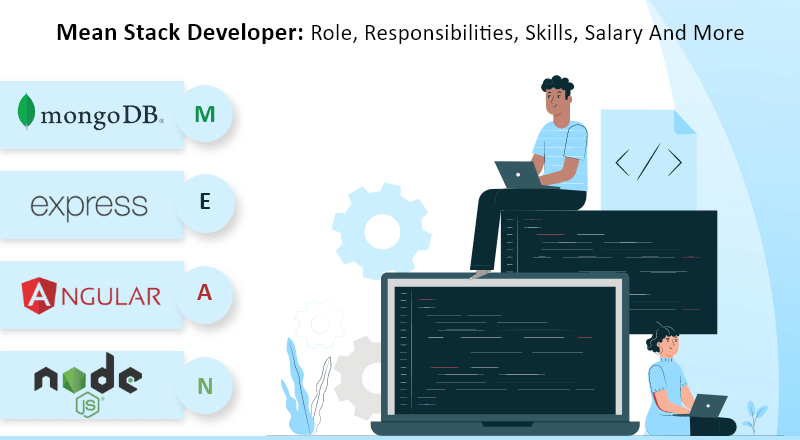 MEAN Stack Developers: Who They Are?

MEAN stack developers work on the frontend as well as the backend. They are application developers who work on features and modules for the frontend and backend, integrating APIs and forming their work structure around modern-day development approaches like DevOps and Agile.

Here are the different MEAN stack developer responsibilities that the developers need to shoulder, for producing the best possible output:

As a MEAN stack developer, the following are the basic technical and soft skills that are necessary to showcase their expertise:

As per recent surveys,

Here are some of the most asked MEAN stack developer interview questions:

On A Closing Note

The MEAN family of technologies is a highly popular and user-friendly interface to create dynamic applications and websites. It helps your build a simplistic, flexible, and open-source solution that can be most lucrative. No wonder, MEAN stack developers are much in demand and can continue to do so. Hiring MEAN stack developers is on a high and shall remain so for the near future.

It has its own set of challenges, but with perfection and detailed knowledge, it is easy to garner mastery over the MEAN stack and thereby, come up with a range of solutions. Taking guidance from an experienced IT partner would surely help in availing the best of services – getting flexible and dynamic apps developed by experienced MEAN developers.