Why ReactJS Development Services is becoming popular? Owing to its reactive model and competence, ReactJS has been ruling the developers’ zones. One bigger factor that contributes to its popularity is the social media giant Facebook backing it. As one of the most favorites amongst developers and enterprises, ReactJS, as a rich JavaScript library, has its own bunch of reasons to prove its worth. It is a great front-end library to utilize in building your UIs. As it executes on React Fiber and lets you build a smoother user interface, it is much faster.

There are certain highly obvious advantages that ReactJS development services carry along if there is an exceptional ReactJS expertise available:

Today, ReactJS development companies are leveraging the potential of this modern-day framework making the most of its robustness, scalability, flexibility, simplistic learning curve and support by tech giants like Facebook, Instagram, and their respective communities. It, being an open source front-end JS library, has been a preferred option for industry segments of various sizes. ReactJS developers and designers are capable enough to showcase a variety of good quality UI components that transform business requirements into actual software solutions for a diversity of B2B and B2C clients. ReactJS can easily be clubbed with AngularJS and NodeJS to offer state-of-the-art solutions to multiple domains around the world.

ReactJS Version 16 – The Latest & The Most Promising Upgrade is Here

The version of ReactJS, V 16, that released in September 2017 has been garnering rave reviews all over the globe, amongst its developer community fan base. React 16 also known as React Fiber is the newest React core algorithm for enhanced UI presentation. As the most updated version of this JavaScript UI library, it facilitates an instant upgrade for ReactJS projects, speeding the performance of web and mobile apps. 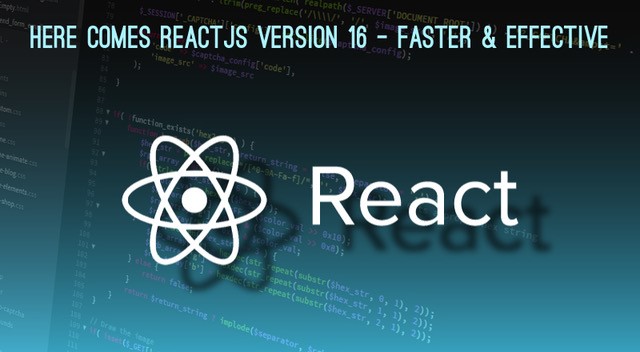 There is a lot of excitement in the air with regards to the release of the latest version of ReactJS – the version 16. Some of the established feature requests have been fulfilled in this version such as fragments, condensed file-size, portals, better server-side rendering, error boundaries, support for custom DOM attributes etc. Let us have a sneak peek into some of the major highlights of this latest version:

In this latest upgrade, there is a novel core architecture called Fiber. With a stringent focus on removing all longstanding internal abstractions, there are many new features that are sure to work wonders such as error boundaries, async rendering, portals and fragments. The best part is that the APIs are the same and hence migration to the latest update is easy and continuous.

ReactJS v 16 has a totally redrafted server renderer – a quicker one that supports streaming. This version is about 3 times faster than the previous version. With two novel ways to render on the client side – render () and hydrate (), ReactJS becomes more useful in hydrating server-rendered HTML. It helps you to send bytes faster to the client. There is now no need to bundle React to get good server-rendering performance. It is much better at hydrating server-rendered HTML once it reaches the client.

ReactJS has proven its support to backward compatibility and hence the code, that once ran successfully in React 15 will surely execute seamlessly in React 16.

In the latest upgrade, the client-side renderer lets components to return a string, a number or an array of elements through a rendering mechanism. This is also present in the server-side rendering part.

Now, there is a highly robust error handling mechanism that unmounts the entire component tree from the root whenever there is an error occurring. Error boundaries are also used as special components that capture errors inside their subtree. JavaScript error is that part of the application code within the components. The novel concept of error boundary for ReactJS users includes try-catch statements.

Since ReactJS is built on Fiber, it plays an important role in showcasing the major changes in the version. As days go by, there are chances of more and more features getting added to this update. One of the areas that seem to be getting a lot of limelight is async rendering that is a strategy to cooperatively schedule rendering work by giving execution to the browser.

We @ SPEC INDIA hold proficiency in providing dynamic & world class ReactJS development services, across a variety of industry domains. Blending in a mutual mix of ReactJS with project execution experience, our organization provides our esteemed clientele with the finest of profitability & competence, to stay a step ahead of the rest. Our accomplished developers possess demonstrable participation in developing and deploying mobile and web apps, be it any hardware, device or browser.