As of August 2021, according to the TIOBE Index, of the top 100 programming languages, the top JVM languages are Java, Groovy, Scala, Kotlin, and Clojure.

We all know that Java is a great, widely-adopted, and immensely popular programming language used by a large number of apps, programs, and systems. Here, in this article, we are comparing Scala, a popular JVM-based language with Java. While we know that Scala is significantly less popular than the Java language and Java development, but here, we are trying to know Scala better with all its features, its popularity, and how it is different from Java.

Let’s first see what Scala is and where it is used.

Scala is a statically-typed general-purpose programming language that supports both – object-oriented programming and functional programming. Scala is a JVM-based language that is influenced by Java, Common Lisp, Scheme, Java, Haskell, and several others. Scala is designed to address loopholes in Java with advanced features that are not present in Java. Scala runs on Java Virtual Machine (JVM) and it is compatible with existing Java programs.

The name Scala is a blend of two words, Scalable and language, representing that Scala is scalable and designed to grow as per the requirements of users.

A Little History Of Scala:

Scala was released publicly in 2004 on the Java Platform after an internal release in 2003. It was designed by Martin Odersky who had previously worked on Generic Java and javac, Java compiler. It quickly grew in popularity due to its language interoperability and functional programming paradigm. Scala’s recent stable release, Scala 3 has been released with great features and improvements.

Here are some points that justify Scala’s uniqueness:

What Kind Of Applications Can Be Built With Scala?

Scala is suitable for web apps, data analytics, and enterprise applications, and desktop applications. It is a great choice for distributed and concurrent programming. As it supports both, FP and OOP, it is a perfect fit for real-time streaming processes and programs. It is a versatile, general-purpose programming language, making it easier to build high-performant apps ranging from machine learning to desktop apps.

Now, let’s quickly navigate through Java and its features.

Java is a class-based, high-level, object-oriented, and general-purpose programming language originally developed by James Gosling at Sun Microsystems. Java is one of the most popular programming languages and lets developers write once, run anywhere. Java is steadily on the top from mid-2015 to 2020 due to its diverse capabilities and usage across data centers, android app development, dynamic web apps, game consoles, and even supercomputers. Sun Microsystems was acquired by Oracle in 2010, and since then, Java is owned and maintained by Oracle Corporation.

What Makes Java Popular? Here Are Major Features Of Java

If we talk about the popularity of Java, there is hardly any language except C and C++ that can beat Java in terms of use and popularity.

Where Java Is Used? Who Uses Java?

Java’s presence is everywhere – on mobiles, desktops, games, large-scale industrial applications, IoT, scientific applications, big data apps, and so on. It has been in the market for more than 20 years, so it is quite obvious to see many enterprises, retailers, manufacturers, banks, and financial companies relied on Java. World-famous organizations use Java in one or another way. Many new programming languages are also inspired by Java.

Companies that use Java:

Java Is Suitable For:

After going through the introduction and features, you might have an idea about their differences and similarities. Let’s differentiate both in detail. 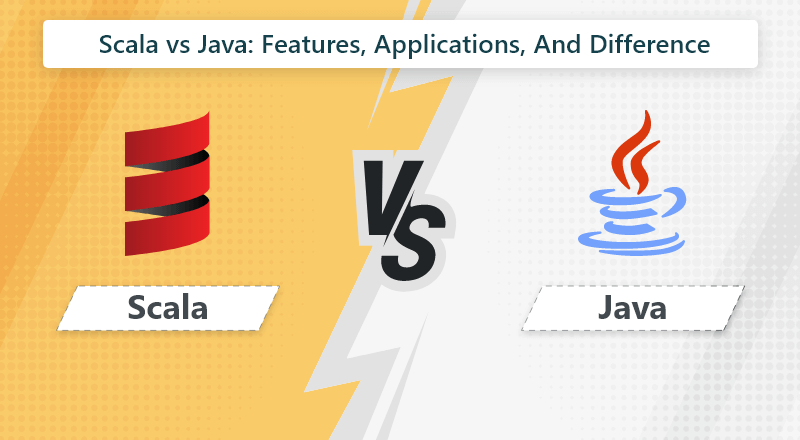 Scala vs Java: A Detailed Comparison Between Two JVM Languages

We are comparing Scala with Java based on certain parameters such as paradigm, community, tools & frameworks, learning curve, concurrency model, performance, and how they handle errors.

One of the major aims of developing Scala was overcoming Java’s criticisms. This is the reason Scala supports multi-paradigm as it lets developers explore functional and OOP together. On the other hand, Java is an object-oriented programming language and does not use functional programming.

This is one of the key differences between both these languages.

Java is an immensely popular language but it is not compact. You need to write many lines of code even if you want to execute a small program. Unlike Java, Scala’s syntax is concise yet readable. Scala code can easily replace the verbose code of Java with a fewer number of lines of code. But, Java is easy to learn and master while Scala is not that friendly for beginners. It is slightly complicated than Java and has a steep learning curve.

Those who are coming from a Java background may find it easy to learn and code in Scala. However, Scala code is a little bit complex than Java because it is not verbose.

Java is more mature, stable, and widely used than Scala. Although, Scala is backed by a strong community of developers, organizations, and individuals. The Scala language is maintained by Scala Center at EPFL that focuses on documentation, education, open-source community, and its association with different organizations.

Java enjoys a prominent place in the market for many years and it has a very strong and wide community of developers across the world. The Scala ecosystem also includes a huge number of projects and contributors from all over the world. It is an open-source project with a diverse community that focuses on making Scala better.

Seeing Java’s popularity and existence over the years, it has an extensive range of libraries, packages, tools, and development environments. Popular Java IDEs for Java include Eclipse, Android Studio, Apache Spark, Jenkins, and many more. Some of the most popular Scala frameworks are Play, Scalatra, Lift, and Grails.

When it comes to thread communication and processing, Java allows concurrent running threads – parallel execution of two or more parts of the program. Contrary to this, Scala uses an actor model structure that promotes no shared state architecture. Think of each object as an actor with its unique properties, mailbox, and behavior.

Java provides error handling and even creates chain exceptions for specific types of failures. In Scala, it is more flexible to handle errors as developers have multiple ways to do that.

It depends on the app size, functions, and other parameters. However, both languages are powerful and interoperate well with each other. Scala code looks cleaner and shorter than Java. Scala offers powerful expressive features that you can leverage to build high-performant apps.

Hello World Program In Both Languages:

Let’s see how code style and length differ in Scala and Java.

Here, there is no such notable difference but when you see more code and practical examples, Scala can replace Java’s 20 lines of code in less than 10 lines.

Scala vs Java: A Quick Comparison

Scala vs Java: What To Choose And When?

As we have always said, the choice of language and frameworks depend on the requirements and other parameters. Both languages have powerful features and a huge user base and their limitations and strengths.

This article helps you understand languages well so you can know the potential of language to create an app of your requirements. Both are popular and used for a wide number of tasks and apps. Java enjoys its position on the top with even more flexibility than ever before and on the other hand, Scala is still evolving and focuses on resiliency and stability.

Scala on the code front, allows a developer to write better, shorter code that can be easily debugged and tested. It requires less time to write code if you are a skilled Scala developer. Java itself became a huge ecosystem because of its 25 years of existence. However, the choice is subjective and requires many factors to be considered before you make a decision.

Have you developed any app using Scala?

What would you prefer – Java or Scala?