“Over 50% of professional Android developers now use Kotlin, it’s been one of the most-loved languages two years running on Stack Overflow, and one of the fastest-growing on GitHub in the number of contributors.”

“Today we’re announcing another big step: Android development will become increasingly Kotlin-first. Many new Jetpack APIs and features will be offered first in Kotlin. If you’re starting a new project, you should write it in Kotlin; code is written in Kotlin often mean much less code for you–less code to type, test, and maintain.”

Google announced this in its Google I/O 2019.

In 2017, Google made Kotlin the official language of Android. Since then, it has been increasing in popularity among the IT community and app development world owing to the benefits of interoperability and maturity.

In this blog, we will be covering top companies using Kotlin App Development in their programming environments. We will be also covering how Kotlin has topped the chart of the most popular programming language due to its benefits. 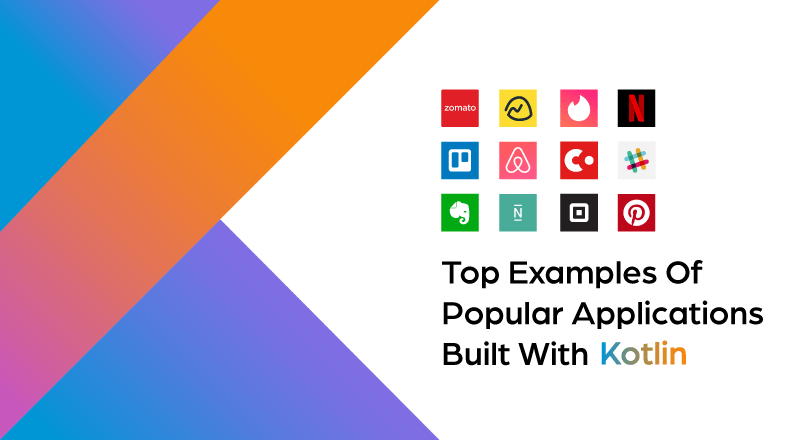 Google has officially declared Kotlin as its first-class programming language for Android development. Not only that, but Google also uses Kotlin in their production code and continue their efforts to improve Kotlin experience. Google is promoting Kotlin through Kotlin-friendly SDK, Android KTX, Kotlin examples in official documentation, and online Kotlin course.

Pinterest, a unique and popular image sharing service reported using Kotlin in its Android app. Kotlin is the primary language for Android development at the company. Kotlin has helped engineers to write code clearly, quickly, and more accurately, said one of the Android engineers at Pinterest.

Migrating from Java to Kotlin for its app yielded better results to the end-users and the team. Replacing Java with Kotlin benefited Pinterest to build code with speed and efficiency, resulting in reduced time.

The company is dealing with software and hardware products and possesses quite a huge customer base. Kotlin helps them improve performance, speed, and productivity and that’s what Kotlin is designed to do.

Trello, a leading collaboration tool is used by millions of users worldwide to better organize projects via boards. Trello is widely popular and allows users to organize anything with anyone, anywhere.

Trello team Kotlinized major functions and creating new features in Kotlin to leverage the benefits it has to offer.

Evernote uses Kotlin over java for stability, clarity, and speed in its Android app. Evernote is a well-known application that is exclusively designed for note-taking and task management.

Slack is a popular business communication platform developed by Slack Technologies. It helps organizations and team members collaborate via chat rooms, private groups, and instant messaging. According to its tech stack, it uses Kotlin in its android environment.

Corda is an open-source Blockchain platform for businesses and it is entirely built in Kotlin language. JVM was their choice as a platform because of its scalability, cross-platform runtime, and thread-safe architecture. Java is a great language but it lacks modern convenience and significantly reduces developers’ productivity. They picked Kotlin because of its interoperability with Java, functional programming, and easier learning curve.

Tinder is a leading online dating application, known for its revolutionary approach to how new people meet and date. According to Stackshare.io, Tinder is using Kotlin in its production environment for concise and clear code architecture.

N26 is a leading German neobank offering its services across Europe and the United States. They have chosen Kotlin as their major development language for backend services because of Kotlin’s high performance and maturity of language.

Netflix is the world’s leading streaming entertainment service with 183 million paid subscribers across 190 countries. They have rebuilt the current UI player in the Netflix Android app using 100% Kotlin.

Airbnb used Kotlin in a new android product framework (MvRx) for a seamless experience, according to its tech engineering blog. Airbnb is the world’s leading platform for homestays, tourism experiences, and lodging.

Trusted and used by millions, Basecamp is one of the leading project management and team communication tools. The application is written in Kotlin and it has made a difference in quality, speed, and performance, the team reported.

Zomato uses Kotlin to write more safe and concise code for its Android app. Kotlin has helped reduce the lines of code and also identify important defects during the compilation of code.

The list goes on. Many apps are using Kotlin in their android environment and realized the benefits of it.

FAQs About Kotlin: Why Kotlin Is Considered Pragmatic Than Other Languages?

Here are some basic and obvious questions regarding Kotlin that would help you understand why these top companies are advocating Kotlin over Java for android.

Kotlin is a general-purpose, cross-platform, and statically-typed programming language. It is developed by JetBrains.

In February 2012, JetBrains made Kotlin an open-sourced project under Apache 2 license.

What Is Special About Kotlin?

Kotlin is designed to fully interoperate with Java, i.e., Kotlin mainly targets Java Virtual Machine (JVM) and works fine with existing Java libraries. One more special thing about Kotlin is functional programming. This gives developers more freedom and allows them to be more expressive due to its declarative style programming. It does support object-oriented programming.

Why Is Kotlin Preferred Over Java In Android Development?

Kotlin reduces the number of lines of code by approximately 40% compared to Java. Kotlin is more concise and also type-safe. With Google’s recommendation of the preferred language for android app development, Kotlin has increased in popularity among developers and mobile app development companies.

What Is Kotlin Used For?

Kotlin is used for:

What Are The Benefits Of Choosing Kotlin?

Who Is Behind Kotlin?

Kotlin is developed and maintained by a team of 70+ people at JetBrains. Additionally, 250+ independent contributors continuously putting their efforts to enhance the language. Talking about JetBrains, it is a global software vendor known for its revolutionary, intelligent, and advanced tools for software and teams.

95 of the Fortune 100 companies use JetBrains tools. This indicates the market position and success of this global company.

More than a third of developers are migrating their existing projects to Kotlin language, according to the JetBrains Developer Ecosystem 2019 Survey.

Kotlin is the fourth most loved programming language according to the 2020 Stack Overflow Developer Survey.

It has also achieved the O’Reilly Open Source Software Conference Breakout Award for 2019.

Interoperability with Java, functional programming support and official Android programming are some of the key attractions of Kotlin.

Migrate From Java To Kotlin For Efficiency, Productivity, And Better User Experience:

According to the JetBrains Developer Ecosystem 2020, Go, Kotlin and Python are the top 3 languages developers are planning to adopt or migrate to.

More and more apps will be written in Kotlin.

You can switch to Kotlin from Java or start a new project in Kotlin to gain benefits of performance, productivity, and speed.

Which language do you use for Android App Development?

Are you interested to explore the benefits of Kotlin for your app?