“Micro-service architecture provides a range of technical benefits that contribute to the development velocity and product quality in software projects, while also contributing to the overall business agility”– Mark Emeis

Microservices architecture is the software development technique that structures an application as a collection of loosely coupled service. Each service is self-contained and should implement a single business capability. Microservice architecture is designed to overcome the challenges, failure, and breakdown of the larger applications.

It provides opportunities to add resiliency to the system so that components can handle spikes and errors gracefully. With this, every stakeholder can focus solely on one element of an overall application, with their own programming style without concerns about other components.

The communication in micro-services can be carried out effortlessly because they are stateless and in the well-defined interface (request and response are independent).

The philosophy of microservice is like the Unix philosophy i.e. “Do one thing and do it well”.

Huge conglomerates like Netflix, eBay, Amazon, Twitter, PayPal, Walmart, and many others are leveraging the potential of this innovative architecture. 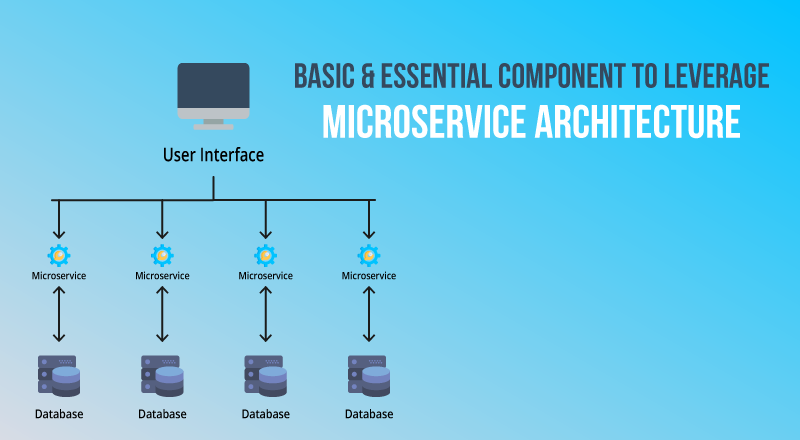 Microservices is a great technology, but there are certain fundamental tools and technologies that can help optimize the functioning of Microservices, increase of speed of functioning and make it easy to implement.

Let us go through each one of them:

Orchestration is the automated configuration, coordination, and management of computer systems and software. For Container Orchestration there are different solutions such as Kubernetes software. The orchestrator is known to the memory needs of your services, CPU allocation and placing of each service into relevant server.

For an effective Microservices architecture, you would need an automated CI / CD procedure and artefact registries. Orchestration can assist very well in running and managing this. It can help in managing disparate isolated settings, resources, storage distributions, etc. It can help in performing deployments and rollbacks with automatic scheduling, service detection, and load balancing. It can be of great assistance in dealing with app configurations and executing centralized logging systems, metrics gathering and tracing, etc.

Kubernetes – “Kubernetes (K8s) is an open-source system for automating deployment, scaling, and management of containerized applications”. Originally born at Google, Kubernetes was released in 2015 as an open-source tool for all. Later, Google handed over the entire project to Cloud Native Computing Foundation (CNCF), operated by the Linux Foundation. Kubernetes is an open-source container as a service (CaaS) orchestration systems that automate deploying, scaling and managing of containerized apps, speeding up the development procedure. Since it has been handled by Google taskforce, there is a certain level of maturity that exists.

Containerization focusses towards remote stateless environments that help in extracting away variances in OS distributions and basic infrastructures. Containers are light in weight, independent, executable packages of software that encompass all elements needed to run it like code, libraries, system tools, runtime etc.

It is like a virtual machine, simulating a real machine with many similarities but significant architectural variations. Containers execute on a unified OS kernel isolating itself from the environment when moved from a single computing background to another. There has been much of a comparison between Serverless and Containers and that is quite interesting!

The container technology disseminates a large and complex monolithic app into container-based microservices. Performance fine-tuning can be easily done on a microservice level.

It is difficult to effectively build microservices without containerization. Services will always need containers, as they simplify development, testing, deployment and implementation.

Docker – As one of the popular open-source technologies around the globe, Docker has been an established name in the modern world of deployment container virtualization, facilitating OS-level virtualization and multiple containers executing on the unified server. It being lightweight, shares the operating systems of the hosts, does not run its own OS and hence looks like a hypervisor. It has a portable container that lets you host the application and allows deployment or relocation on any Linux server.

In today’s IT glorified era, applications are being executed in containers instead of virtual machines. Considered as one of the most rapidly advancing technology, what lies at the core of containerization is Docker – the media through which users can seamlessly do the packing, distribution, and management of applications within containers. It facilitates the automatic deployment of apps within software containers which allow the users to chip in all needed parts like libraries as a unified pack.

Continuous deployment is a strategy for software releases wherein any code commit that passes the automated testing phase is automatically released into the production environment, making changes that are visible to the software’s users.

Continuous integration, delivery, and deployment are together discussed as continuous software development, and they are related to the Agile and DevOps methodologies. Continuous delivery and deployment instigate from continuous integration, a method to develop, build and test new code rapidly with automation so that only code that is known to be good becomes part of a software product.

Successful implementation of microservices is a tough job because it talks about scuffling the enterprise’s structural element, as well as accepting new data management styles and deployment and monitoring skills. To cope with these challenges, continuous deployment is extensively used in microservices architecture.

Jenkins – With an aim to assist the development team, Jenkins – a Java-based CI tool, offers many plugins for building, deploying and automating projects. Utilized as an extensible CI / CD server, Jenkins is a great option for DevOps teams to monitor the implementation of recurrent jobs. It supports Windows, Mac OS X, and Unix OS. It is installable through native system packages, Docker or can execute standalone through a machine with JRE.

Jenkins must be affiliated with a version control system so that as soon as there is a new code being pushed to a code repository, Jenkins server can build and test the latest code and let the development groups know about it. It is also an orchestration tool, apart from being a continuous integration tool. It has a novel pipeline as code functionality that allows developers to keep the CI / CD pipelines as a thorough code.

Traditional tools cannot do away with dealing with a complex application topology associated with microservices. The monitoring and alerting system of a microservice related architecture must facilitate an ongoing resource change, monitor data in a centralized location and show information that continuously altering the nature of microservices. A monitoring and alerting system is needed to effectively and continuously keep a watch on the numerous events taking place.

This system can showcase events that can be correlated to a common instance. Even app-based log information can be extracted and that can be further used to allow monitoring alerts and thereby, track significant information.

For all those who are in the DevOps era, Microservices comes along with a set of significant advantages such as deployable nature, reliability, availability, scalability, modifiability and leveraging the agile methodology. Those adapting to Microservices are finding a great deal of benefit using the DevOps culture along with Microservices.

There is additional productivity observed since there is a common set of tools that can be utilized both for the development teams and operations. DevOps and Microservices work best when together and that has been a known fact now.

There is so much happening when it comes to data transfers in Microservices. There are chances of data crashing or irregular behavior of data. While this may happen, the continuous service operation must not get hindered. And that is only possible if there is a provision of offloading data regularly.

To see to it that users can continuously keep working even if some of the instances fail, there must be a proper data offloading procedure in place. This process moves the data into a shared storage system that is available for use, from all other service instances. This ensures that even after a crash, routine user interaction doesn’t stop.

With so many instances working at the same time, it isn’t feasible to read the logs at different places. There must be a centralized instance where all the log files are being fetched and read. This can get you insights into how the code is operating in the main environment. You can use a tool to extract those logs by executing it on each node in the cluster. This tool will later, send the log files into the centralized logging system.

Cloud-based applications are competent enough to provide flexibility in any situation. Speed can be improvised, and deployment efficiency can be bettered. To optimize the potential of the cloud, Microservices proves to the apt architecture. At the base, Microservices along with the cloud proves to be a decomposition method to overcome the complication of systems. Microservices is enhanced for the cloud and there are big companies like Google, Netflix that have experienced the goodness of both.

These container platforms are independent of the underlying infrastructure and hence, assist clients in going in for their cloud-native steps. Novel technologies like Service mesh have been signifying the usage of cloud-native technologies in the era of Microservices architecture.

Microservices has been the talk of the IT town. There are umpteen technologies that are attempting to sync with this wonderful architecture and prove their harmony with each other. As designers, architects and product developers, IT engineers are keen on making the most out of Microservices clubbed with the above-mentioned components that make it a wholesome meal for anyone interested in a comprehensive package.