Deno vs Node: Key Differences You Need To Know

JavaScript is the most widely used dynamic language which runs on every device with a web browser.

A large number of developers are skilled in JavaScript, and with support from the organizations like ECMA International, JavaScript has been continuously improved and evolved.

The creation of Node.js in 2009 by Ryan Dahl fueled the growth of JavaScript outside of web browsers. Back in 2009, when Node.js launched, JavaScript was a different language.

Now, JavaScript has changed a lot and the surrounding infrastructure has also changed by leaps and bounds. The creator of Node.js, Ryan Dahl felt the need of creating a new runtime that overcomes the design mistakes in Node.js. Deno is the result of this.

Node.js, being a very successful platform and widely-used JavaScript runtime environment, represents a ‘JavaScript Everywhere’ paradigm for the first time. Node.js has changed the scenario of dynamic web development and enables developers to use JavaScript for server-side scripting. This is a non-conventional approach as JavaScript is meant to be used in client-side scripting.

Node.js quickly earned much recognition from leading organizations and was widely used by industry leaders in their production environments. Node.js has a large number of users and it is one of the biggest communities in the development world.

With Deno’s launch, people started assuming that Deno will replace Node.js and Deno is a replacement for Node.js. To clear this confusion, we will be talking about Deno vs node and how Deno is a Node.js alternative and not a replacement.

Deno vs Node: Difference Between Deno And Node.js

Before we jump to the comparison, let’s start with a quick overview of each. Both are runtime environments created by the same software engineer.

First and foremost, Deno is not a branch of Node.js.

Deno is a new runtime for executing JavaScript and TypeScript outside of the web browser.

It is based on the V8 JavaScript engine and the core is built in Rust programming language. Deno was announced by Ryan Dahl in 2018 during his presentation ’10 Things I Regret About Node.js’. It is specifically designed to leverage modern JavaScript and addresses regrets regarding several vital areas of Node.js.

Deno aims to provide a secure V8 runtime engine with TypeScript as its base because of its accuracy. It also promises to simplify modules and build systems and provide a secure and productive scripting environment.

What Is Node Js?

Node.js is a server-side, open-source, cross-platform JavaScript runtime environment. It runs on the V8 engine and executes JavaScript code outside a web browser.

Node.js has a large customer base that includes popular organizations such as IBM, LinkedIn, Netflix, Microsoft, PayPal, SAP, Walmart, GoDaddy, AWS, and many more. It is used for a myriad of use cases but it is mainly used for creating web servers and networking tools using JavaScript. A large number of websites use Node.js for back-end API services.

Let’s talk about the difference between Deno And Node.js. 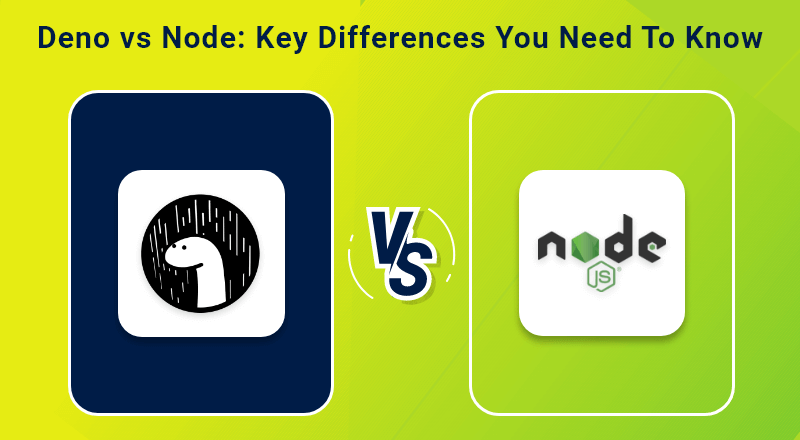 Deno vs Node: How Deno Is Different From Node?

One of the key objectives of Deno is to provide users with security that Node.js lacks. Deno is secured by default. This means a program run with Deno has no file, network, or environment access unless specified. Deno requires programmers to give access to an executing script through command-line flags or prompt runtime permission same as browser implements.

Deno restricts file system and network access by default to run code in a secure sandbox.

Node.js allows access to network and file systems, making them vulnerable and open to exposure or some security concerns. When you work with Node.js, there are many such security issues you need to handle to prevent your app from security breaches.

Packages in Deno are linked directly to the URL, unlike Node’s npm. Deno fetches local or remote dependencies using URLs, similar to browsers.

Npm is the default package manager for Node.js. It is used to install and manage public and private third-party packages. This online database of packages is called the npm registry.

Node.js was designed before JavaScript’s concept of Promises or async/await. Due to that, most of the APIs were written to take an error-first callback. This practice often resulted in verbose and cumbersome code.

Now, Node.js developers have access to this async/await syntax but they also have to manage backward compatibility through APIs.

In Deno, this is entirely changed. It supports modern JavaScript features and uses await and there is no need to wrap it in an async function. It requires users to explicitly read() new data. Rust offers its promise-like abstraction, called Futures. With the help of this, Deno makes it easier for the developers to bind future-based APIs into JavaScript promises.

TypeScript is an extension of JavaScript that allows users to provide type information. Deno supports TypeScript out of the box using a TypeScript compiler with caching mechanism.

Node.js packages are written in JavaScript. It does not have first-class support like Deno but TypeScript is well-established and widely used in the Node.js world through the TypeScript package.

Node.js uses the CommonJS standard. Though, it supports ES Modules but in an experimental phase. CommonJS is used for organizing and structuring JavaScript code. It is a module formatting system.

Node.js has one of the largest, most vibrant, and innovative open-source communities in the world. It is built and maintained by the community.

A large number of developers use Node.js and power thousands of apps. And Deno is the new player in this space. It is in evolving phase and growing.

Node vs Deno: A Quick Comparison

Also Read: An Introductory Guide To Deno: How It Is Different From Node.js

This most-discussed topic has a simple answer, No.

Deno is created by the same creator of Node.js. This is true and it is also true that it overcomes the design mistakes of Node.js.

But, it won’t replace Node.js.

If we see the current landscape of software development, Node.js has been around since 2009 and Deno is like a baby compared to the vast and strong Node.js community.

Developers and open-source contributors are still getting comfortable with this new runtime environment. Certainly, it has huge potential as it overcomes some serious challenges of Node.js like security, modules, central repository system, and callbacks.

Deno will take time to grow. The number of libraries, frameworks, packages, and resources is too small to consider when you compare Deno with Node.js. Given that, Node.js is mature, evolved, and used by a large number of users, replacement by Deno is quite impossible.

We have to wait till Deno’s full potential is realized and accepted by the developer community. Till then, we can try Deno, share feedback, and experiment with its powerful features like security and package management.

We see a bright future and growth for Deno which is a very interesting project started by Ryan Dahl.

What’s your take on this debate of Deno vs Node?