Cross-platform app development is a popular alternative to native development. The reasons behind its rising popularity are quite understandable – quick time-to-market, reduced cost, and single codebase for multiple platforms. At present, it is one of the important trends in the software development world.

More and more organizations and developers started to believe that cross-platform is an approach worth giving a try. Cross-platform development frameworks and technologies are rapidly becoming popular and people debate over frameworks to choose the right one at the right time.

Here, we are covering differences of two leading cross-platform development frameworks or we can say technologies – Flutter vs Kotlin.

Note: This article compares Flutter vs Kotlin based on different parameters. The choice of the technology or framework is subjective and depends on your overall requirement. However, this post helps you understand the differences between the two so you can decide what to choose and when. This post certainly does not decide which one is the best. It is written with the purpose of making your technology selection easy. 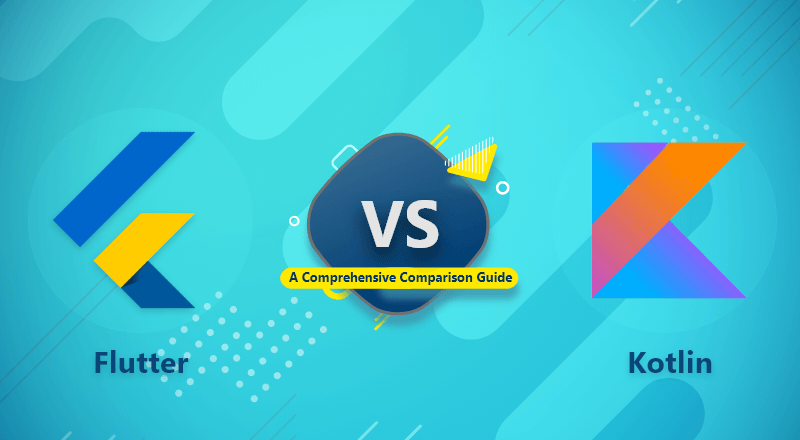 Flutter vs Kotlin: A Detailed Comparison Based On Various Parameters

Before we start, let’s make one thing clear.

Flutter is a framework and Kotlin is a programming language.

A Quick Introduction To Flutter And Kotlin:

Flutter is Google’s UI toolkit for building natively compiled, appealing, and feature-rich apps for mobile, web, and desktops. Flutter is one of the fastest-growing open-source communities. It lets developers build applications for Android, iOS, Linux, Windows, Mac, Google Fuchsia, and web from a single codebase.

Kotlin is a general-purpose programming language by JetBrains. It is designed to interoperate fully with Java. It is supported by Google as its preferred language for Android app development. It quickly became popular after Google announced first-class support for Kotlin on Android.

We will be comparing Flutter and Kotlin based on the factors listed below:

Flutter uses Dart programming language. Flutter apps are compiled directly to machine code, resulting in incredibly fast apps. It does not depend on web view or device’s OEM widgets; instead, it uses its rendering engine to render every view component. Its rich widget set consists of all critical platform differences such as icon and fonts, navigation, scrolling, and other UI-related elements. This will help achieve native-like performance on both the platforms – Android and iOS.

Flutter delivers faster performance – it aims to deliver 60 frames per second (fps). Performance of Flutter is generally measured by how the UI of an app looks or how smoothly it works. This is because Flutter is a UI toolkit and mainly targets the frontend part of the application.

When it comes to performance, Kotlin apps are faster and delivers good performance on all platforms. Google itself has 60 apps written in Kotlin. Also, Kotlin code is compiled in the same format of the platform it is written for. This makes Kotlin one of the robust and advanced platforms for developing cross-platform apps.

Both Flutter and Kotlin deliver amazing performance and it generally depends on the functions and features involved in app development.

Google-based Flutter is driven by a thriving open-source community of developers, designers, and tech enthusiasts. Flutter keeps growing its user base and used by well-known organizations around the world. Flutter community is constantly making efforts to make Flutter a top choice to build fast and beautiful user experiences for web, mobile, and desktops.

Kotlin is a step ahead in this comparison compared to Flutter. Flutter is a relatively new framework and Kotlin is quite a stable and mature language as it is now one of the official languages for Android app development. Kotlin is a continuously evolving language with a rich ecosystem and a fast-growing global community. Kotlin is backed by JetBrains, a leading software development company making tools for developers and project managers.

Flutter’s user base includes companies like Google, Square, eBay, BMW, Alibaba Group, and many more. Flutter 2 is recently released and developers are loving it. It is one of the active communities in the developing world with 119k stars on the GitHub repository.

Kotlin is widely adopted and used by a large number of developers worldwide.

According to StackOverflow Developer Survey 2020, Kotlin is one of the top 5 most loved languages.

It is a versatile language and more and more developers are leaning towards it. It is used by world-recognized brands such as Google Home, Atlassian, Adobe, Zomato, VMware, ING Bank, Uber, Pinterest, Evernote, Coursera, Trello, Slack, Udemy, and many more.

Kotlin is the fourth most loved programming language and Dart is in the 7th position as per the 2020 Stack Overflow Developer Survey.

Dart is type-safe and similar to JavaScript. Developers find it easy to learn and use.

Kotlin’s syntax is concise and similar to the syntax of other programming languages such as Scala, Java, Groovy, and Swift. If Kotlin developers are coming from a Java background, then it is very easier for them to switch to Kotlin. Being a fully Java-compatible language, developers find it easy to use Kotlin in new as well as existing applications.

The speed of coding depends on the complexity of the applications but both these platforms save time as they enable using a single code base to develop apps for multiple platforms.

Both are open-source software and completely free. Kotlin developers are growing in demand and it is one of the important skills to have as Kotlin is being said the future of Android development.

While Flutter requires learning Dart and that could be a reason why many developers are not considering it as a major skill. It is still in growing mode and we will see many organizations adopting it in the near future.

When we talk about cross-platform apps, UI plays a vital role. One of the primary goals of cross-platform is to provide an experience that feels like a native. Flutter does the same. It offers unified experiences across all platforms. Flutter is a UI toolkit and takes care of every UI aspect to deliver native performance on iOS and Android using a single codebase.

Kotlin creates a free environment for creating app’s user interfaces. This means it does not impose any restrictions on how you develop your app’s UI. It allows you to use native features whenever necessary or write platform-specific code.

Now, we have seen how Flutter and Kotlin differ from various perspectives. It is important to know the advantages and disadvantages of both to make the selection easy.

We have tried to cover every possible aspect for comparison. If you are still not clear, here’s a quick summary.

When Flutter Is Good?

Flutter is a cross-platform framework that significantly saves your time and development cost. Flutter is a great choice for developing MVP and prototyping apps where time and resources are limited. It can be used by small, mid, and even large-sized business apps. It works best where user engagement is a key to success such as online stores, FinTech apps, and business apps.

When Kotlin Is Good?

Kotlin is developed and maintained by JetBrains that also develops many Java products and has a wide range of developer tools. Kotlin tries to overcome several drawbacks of Java but it has a long way to go. One of the reasons behind Kotlin’s popularity is Java compatibility. Developers can use it in their existing applications, cross-platform applications, and also write server-side code in Kotlin.

It is the best choice for starting a new project in Android or making changes to the existing one. It’s a pretty good choice for cross-platform apps regardless of the size and complexities.

Flutter vs Kotlin: The Main Takeaway:

No framework or a programming language is perfect. Each one has its pros and cons. Flutter and Kotlin both offer the best performance and save your development time and cost significantly. Flutter is more popular than Kotlin in some ways even it is new in the market. On the other hand, Kotlin is more preferred to develop Android apps. If we consider cross-platform development, both offer native-like performances using a single code base.

We keep saying that technology selection majorly depends on the requirement and other factors. We hope that this article provides you with detailed information on these two technologies so you can choose the right tool that suits your requirements.

If you feel that you can make this guide more meaningful by adding some information that is yet to be covered, please feel free to comment in the comment section.