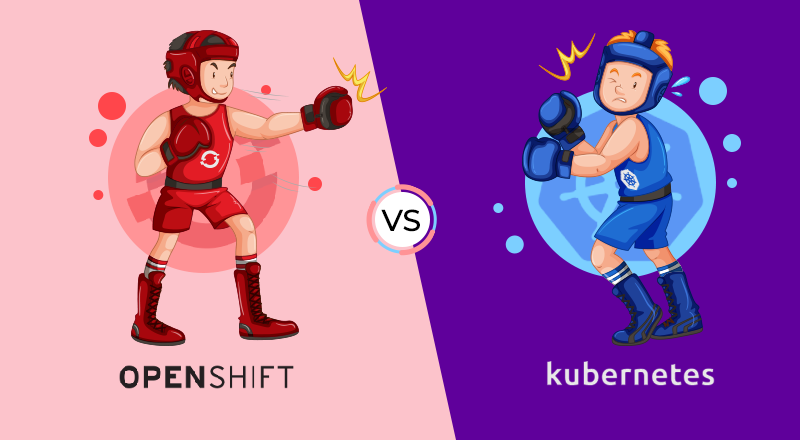 Gartner predicts that by 2022, more than 75% of global organizations will be running containerized applications in production, which is a significant increase from fewer than 30% today

Containerization is the latest jargon today, in the world of IT, primarily to develop and deploy apps in an accelerated manner. In the era of serverless computing and container technology, containers have become highly popular for a long time now. With the increase in popularity, there is an increase in the complexity levels of large containerized applications. Here comes the need for efficient container management platforms that can help in easily managing containerized applications. Today, Kubernetes and OpenShift are two big names in this arena and have become major players in the container revolution. Popular, effective, scalable, robust, and simplistic – both have their own user community to boast of.

Here is a certain feature list that is present in both – Kubernetes as well as OpenShift:

Openshift vs Kubernetes: A Brief

Here is the first glance at both the container management platforms and their introductory parameters:

Let us go through the nuances of Kubernetes and OpenShift, understanding them further and knowing their strength areas:

“Kubernetes (K8s) is an open-source system for automating deployment, scaling, and management of containerized applications”.

Originally born at Google, Kubernetes was released in 2015 as an open-source tool for all. Later, Google handed over the entire project to Cloud Native Computing Foundation (CNCF), operated by the Linux Foundation. Kubernetes is an open-source container as a service (CaaS) orchestration system that automates deploying, scaling, and managing containerized apps, speeding up the development procedure. Since it has been handled by Google taskforce, there is a certain level of maturity that exists.

“OpenShift is a family of containerization software developed by Red Hat. Its flagship product is the OpenShift Container Platform—an on-premises platform as a service built around Docker containers orchestrated and managed by Kubernetes on a foundation of Red Hat Enterprise Linux.”

Developed by Red Hat, OpenShift is a containerization software solution whose prime product is the OpenShift container platform, a PaaS managed by Kubernetes. OpenShift has been often called “Enterprise Kubernetes” by its vendor – Red Hat. Red Hat OpenShift is a CNCF Certified Kubernetes offering, indicating interoperability between OpenShift and other Kubernetes offerings. It has been written the Go programming language and AngularJS. It possesses an Apache License. The original version facilitates developers to develop and deploy apps to the cloud and appends tools over a Kubernetes core to fasten the development and deployment process.

Kubernetes vs OpenShift – A Comprehensive Comparison

Subsequently, OpenShift is grounded on Kubernetes and hence, there is a lot of similarity between both. Yet, there are some variances between both platforms, depending on important parameters.

Openshift vs Kubernetes: Which One to Choose, Is Always A Tough Question

Both are open-source; both have a common base with Kubernetes at the core of OpenShift; both are popular, and both aim to facilitate faster application development. Because of its unique features and reliance on Kubernetes, OpenShift does have the added advantage of easy installation. Kubernetes is experienced and well-proven; it does require a proper strategy for installation.

Kubernetes is a standardized version and is available on an increased number of platforms than OpenShift. But, OpenShift has many inbuilt components that make app containerization faster and effective.  On top of both, comes a crucial decision – choosing the IT service provider who has the experience, expertise, and infrastructure to help you with the entire application development lifecycle. That holds more crucial and hence should be thought of, very sincerely.