More than one billion downloads

One of the successful, widely-used, and popular open-source projects on this earth

Thousands of users including NASA, IBM, Microsoft, PayPal, Walmart, Uber, LinkedIn, Netflix, and so on

What else do you want to decide the next framework for your project?

Maybe, in-depth understanding of what Node.js is? Or how it has gained recognition from all over the world? Or why these tech giants have chosen Node.js development?

Before we go exploring the reason behind its popularity, we are starting with basics. 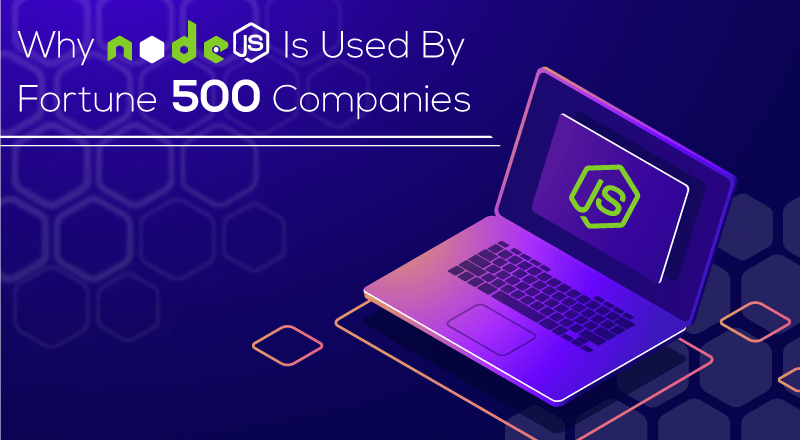 So, What Is Node.js?

If we answer this in one sentence then, Node.js open-source JavaScript run-time environment.

Node.js is much more than a run-time environment because,

It uses the V8 JavaScript Engine (used by Chrome Browser)

It performs asynchronous I/O (A form of input/output processing that allows processing in continuous mode before I/O gets completed.

It allows developers to communicate with databases easily

It is very suitable to develop real-time, scalable, enterprise-level applications

Node.js is majorly used for backend and paired nicely with front-end JavaScript frameworks like Express, Angular, ReactJs, Vue, and many more. What’s more important is, Node.js promotes ‘JavaScript everywhere’ paradigm which is a key attraction for developers.

Who Invented Node.js? How It Has Gained In Popularity?

The history of Node.js is interesting.

At that time, Apache HTTP Server was a popular web server but was unable to handle concurrent requests. To overcome the problem of scalability and parallel execution of code, Ryan Dahi created Node.js which is thought to be addressed these problems.

The integration of Node.js with Google’s V8 JavaScript engine was the significant move and a contributing factor to the popularity of Node.js as V8 is the JavaScript execution engine.

In 2010, a package manager for Node.js environment launched to make installation, upgrade, and sharing code easier for programmers. Node.js quickly became popular after a few years of its release due to the ease of development.

Here Are Some Of The Reasons Why Node.Js Is Popular:

This is a prime benefit for developers.

For most of the web developers, JavaScript skill is mandatory. Majority of the developers are aware of JavaScript and that makes it easier to learn Node.js in a few weeks.

Unlike other Java or .Net frameworks with a steep learning curve, Node.js offers easy learning curve by utilizing JavaScript for frontend and backend. Additionally, it does not require a specific resource to maintain the server, making development faster and cost-effective.

Npm – Node Package Manager, a default package manager for Node.js is widely used by over 11,000,000 JavaScript developers over the world. Npm is the world’s largest software registry to share, run, download, update, and manage packages.

From static to dynamic to microservices, we have been witnessing the change in code, architecture, tool, and storage mechanism.

Node.js is one of the most in-demand software skills for the upcoming years.

Node.js supports microservices architecture which is powerful, highly-beneficial, and suitable for the organization of any size. The combination of Microservices and Node.js is used by tech giants like PayPal, Netflix, GoDaddy, and so on.

If you don’t know what Microservices is, here is the definition in simplest terms,

According to Nic Grange, CTO at Retriever Communications

“Microservices is an approach to designing software systems that are made up of small independent services that each has a specific purpose.”

Node.js follows a single-threaded and event-driven model which allow it to handle simultaneous requests making it very useful for the enterprises having a large user base.

While other architecture creates another thread upon new request, Node.js handles everything within a single thread with the help of asynchronous I/O and event-driven architecture.

According to Stackshare.io, 4006 companies use Node.js in their tech stacks.

Node.js is capable of handling thousands of requests at a time and that’s the key reason why giants like Netflix, LinkedIn, and Walmart with the highest number of concurrent users prefer Node.js as their runtime environment.

We have observed a dramatic rise in cross-platform app development over recent years. Writing one code base and using it for different platforms with little or no modification made it popular among cost-savvy business owners.

Node.js is itself cross-platform runtime environment enabling developers to utilize JavaScript to build stellar cross-platform apps for web and mobile.

It is suitable for almost all type of projects.

Here Are Types Of Applications You Can Develop With Node.Js:

Node.js has transformed web development and made it scalable, faster, and simpler yet loaded with modern features.

We have seen the reasons, now is a time for strengths (advantages) of Node.js over others.

What Are The Advantages of Using Node.js?

Frequent changes and updates in Node.js API considered as one of the key disadvantages as developers need to reflect those changes in existing code and make it compatible to match the latest version of APIs.

Also, many modules and third-party tools are not properly documented or are immature.

Comparison of Node.js With Other Environments:

When we talk about web development in today’s world, Node.js and PHP are popular environments and often being compared based on various factors. PHP is a server-side scripting language and used worldwide to build a strong web presence. These two back-end technologies, Node.js and PHP have their own sets of advantages and disadvantages and one can choose based on the requirement, budget, timeline, and performance.

Python is a dynamic, multi-purpose, and object-oriented programming language while Node.js open-source, JavaScript runtime environment. Node.js is suitable for real-time web applications and Python is an ideal platform to build machine learning and network-intensive applications.

After PHP, Ruby On Rails is a prominent and popular framework for web development. RoR allows integration with JavaScript frontends that makes it one of the popular runtime environments. It is used by renowned organizations like Airbnb, Bloomberg, CrunchBase, Dribble, Yellow Pages, Fiverr, and so on.

Designed by Google, Go programming language, also known as Golang, is syntactically similar to C language. It is widely used at Google and many other open-source projects to build high-performing backbends.

In terms of popularity and easy learning curve, Node.js is a winner because Go requires learning a new language unlike JavaScript in Node.js.

From small enterprises to Fortune 100 companies, every enterprise is reaping the benefits of ease of development and flexibility of Node.js. Considering modern web development structure, Node.js fits all the scenarios.

Node.js is used by Fortune 500 companies and at present, they already know that Node.js offers unbeatable performance. Using JavaScript, Node.js is winning every battle of web development by offering the highest advantages.

Performance, security, coding efficiency, open-source, and faster performance – we believe, this is all you need for extraordinary web presence and NodeJS application development  provides the same.

Convinced to use Node.js for your next web app development?

Do you need more reasons?