Amidst the plethora of programming languages, one popular name that needs no introduction is Python – a favorite of developers in modern-day areas like AI, ML, and scientific calculations. Huge conglomerates like Google, Dropbox, Instagram, Spotify, Netflix, and many more are leveraging the power of Python. It is considered one of the most user-friendly language with multiple libraries to support its key features. Two significant libraries of Python are Numpy and Pandas, which are often compared with each other, due to their high-level user acceptance.

Both are open-source tools that have been favorites of data scientists and hence are often called data science tools. These essential libraries have made Python coding much simpler and easily accessible. They are best needed for any kind of scientific computation or machine learning jobs, thanks to their good performance competencies, intuitive syntax, and matrix computation capacities. Data science applications can make the most of these libraries. Both have their set of similarities and differences, because of which organizations prefer them over the other peers.

Before we compare NumPy and Pandas based on certain parameters, let us understand the basic concept of each, along with its key features:

NumPy is a library for the Python programming language, adding support for large, multi-dimensional arrays and matrices, along with a large collection of high-level mathematical functions to operate on these arrays. – Wikipedia

Numpy, also called Numeric Python, is an important basic package for scientific computing in Python. It is used as an effective multi-dimensional container of generalized data and is a Python library that offers different derived objects and routines. It caters to arrays, matrices, arbitrary data types, statistical operations, I/O, sorting, selecting, random simulation, etc. Numpy can easily integrate with a variety of databases with speed.

Developed in 2005, Numpy is built on C language and its main aim is to support the Python language in terms of performing different numerical computations and single/multi-dimensional array (ndarray) elements. Because of these elements, it can work with a lot of speed and accuracy. It also takes good care of matrix multiplication and data reshaping. It is most useful for almost all areas of data science and engineering.

Be it novices or experienced developers, Numpy can be used extensively by all, and its API can be used in scikit-learn, Pandas, SciPy, and other Python packages. As an open-source third-party Python library, it is powerful, fast, effective, and high-performant. It is not a part of the standard installation of Python but is easy to install. Its sophisticated and broadcasting functions act as limelight and it has efficient tools for integration of C/C++ and Fortran code.

Pandas is a software library written for the Python programming language for data manipulation and analysis. It offers data structures and operations for manipulating numerical tables and time series. – Wikipedia

Pandas is a flexible, powerful, and fast tool that is built on top of Python. The Pandas library acts as a strong Python library support that is easy to use, open-source, and widely used for data manipulation and analysis. Created in 2008, Pandas today has heavy community support because of which it is highly well-known among developers. It acts as a basic block for real-time data analysis, for data scientists.

Pandas offer an effective framework to extract data from disparate sources like CSV, Excel, JSON, SQL, etc and it utilizes data from multidimensional arrays. It is built on top of Numpy, and it has enhanced the competencies of data analytics for Python. It is capable of loading, manipulating, preparing, modeling, and analyzing a variety of data components, regardless of their origin.

It easily handles missing data in floating/non-floating points of data. It is easy to insert/delete columns from high-dimensional objects. It, in combination with Numpy, can garner the best results since the Numpy libraries have most things that are needed for the effective operation of Pandas objects. Pandas offer two types of data objects – Pandas Series and Pandas DataFrame. As a powerful data manipulation/analysis library, it offers labeled data structures like R data, frames objects, statistical functions, etc. 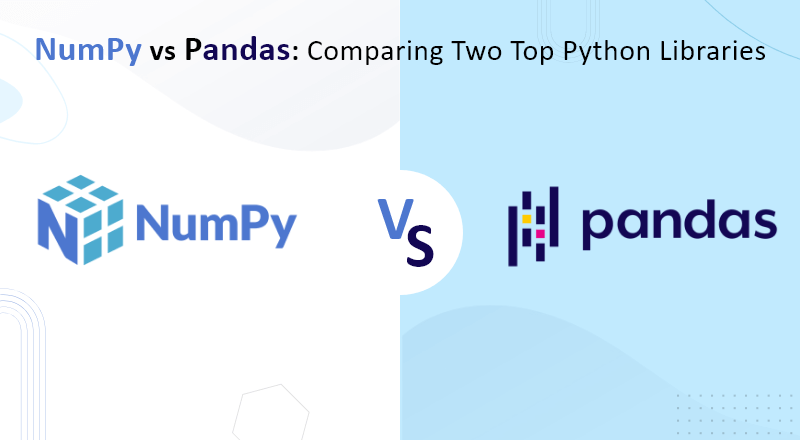 Numpy vs Pandas: A Detailed Comparison

In the world of Python development, Numpy and Pandas are effective Python libraries and hence have a lot in common. Yet, both are designed in such a way that they yield benefits to each other if they function together.

Numpy Vs Pandas is a competitive comparison and together, they make a great pair! Both are complementary technologies to each other!