Are you a fan of JavaScript technologies?

JavaScript is the most popular technology and language to learn among developers. Web developers, app developers, and tech enthusiasts believe that JavaScript builds the base for crafting superior applications which can withstand the competition.

According to the 2017 Stack Overflow Report, JavaScript was the most popular technology among developers. The rise of JavaScript frameworks over the recent years shows its capability to power the modern web application development. The approaches like cross-platform app development and hybrid app development captured the significant attention of developers, business owners, and giant tech organizations. Here, in this article, we will talk about the top 3 JavaScript frameworks – React Native, Ionic, and NativeScript and discuss the key differences between them.

Well, this post does not solve your confusion for selecting best among three but you will be getting an overview of each framework. You should consider how each of these frameworks can help you build future-ready apps by analyzing their features and drawbacks. 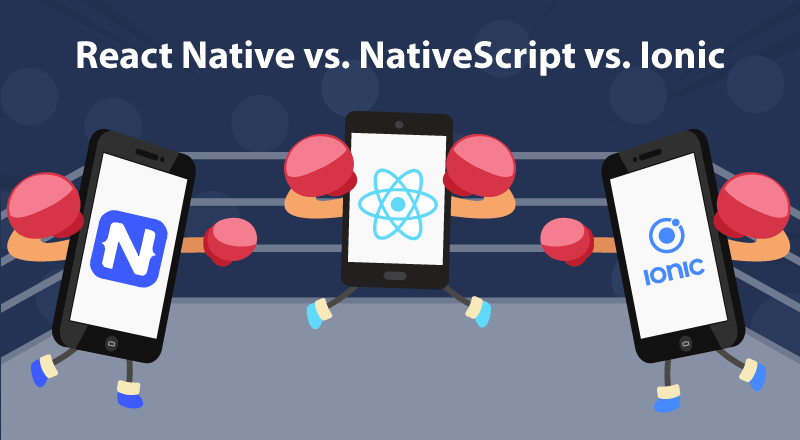 React Native vs. NativeScript vs. Ionic: What To Gain From Each?

Developed and maintained by Facebook, React Native has a unique characteristic of ‘learn once, write anywhere’. It enables you to build cross-platform apps focusing on consistent development experience using JavaScript and React. React Native uses native components in order to deliver a native experience for iOS and Android platform.

Virtual DOM, one of the key features behind its popularity refers to the only rendering sub-components which are changed instead of rendering the entire page on each change. This overall improves performance and enables developers to create apps leveraging a single codebase with React Native development.

Here Are The Benefits Of React Native:

What Are The Drawbacks Of React Native?

Who is Using React Native?

This is a most-talked framework over the recent years.

It is popular for giving 100% native API access and therefore delivering the finest native experience. NativeScript allows the developer to build apps for iOS and Android using a single codebase in JavaScript, Angular, TypeScript, or Vue.js.

It is developed by Progress and community and gained enormous popularity after the few days of public release. The key feature of the NativeScript framework is direct interaction with native APIs.

For example, if you are calling NativeScript Button API, it directly calls the UIButton on iOS or com. android. widget. The button on Android.

NativeScript also provides Angular and Vue Integrations which is a plus for developers. Also, JavaScript can directly access native code so there is no need to write separate binding layers in platform-specific languages like Objective-C, Swift, or Java.

Why Is NativeScript Popular?

The Disadvantages of NativeScript

Who is Using NativeScript?

Now, we are moving towards the Ionic framework which is built with an aim to simplify hybrid app development.

If you are building apps with the Ionic framework, you need to use Apache Cordova plugins to access native functionality. The best thing about Ionic is it lets you build apps for Android, iOS, Windows, and web using a single code base.

Ionic focuses on performance and aims to deliver user experience according to the modern web standards. Ionic 3 is built on Angular which enables developers to create custom components. It offers fast development lifecycle and time-to-market that together makes it one of the widely used mobile app development frameworks at present.

The Pros of the Ionic Framework:

The Cons of Ionic:

According to Wikipedia, In 2015, Ionic developers created over 1.3M apps with the SDK.

Who is Using Ionic?

Major Differences Between Ionic, React Native, and NativeScript: How To Choose Best One?

Apparently, you can’t decide which is best as every framework has different approaches to the development producing different results. Each one has its own strengths, weaknesses, and methodologies. Choosing best depends on your needs and factors like time-to-market, budget, and audiences.
Here, we are highlighting the major differences among these 3 frameworks so you choose wisely.

Ionic offers a complete solution for hybrid app development whereas, NativeScript and React Native target cross-platform app development. React Native and NativeScript aim to deliver native-like performances using languages which give access to the native APIs. On the other hand, Hybrid apps are web applications built using web technologies like HTML, CSS, and JavaScript. Once built, the app is wrapped in a native container using Apache Cordova plugin.

Hybrid apps are easier to maintain and faster to build. It allows developers to use a single code base for multiple platforms. Ionic is embraced by many and it has a wide community dedicated to making Ionic one of the topnotch frameworks out there.

These three frameworks are built with different purposes. Each has a great community support with an aim of future enhancement. React Native is backed by Facebook, Ionic is developed by Drifty.co, and NativeScript is created by Progress – every organization possesses great skills and expertise to take the development environment to the next level.

Performance And Ease Of Development:

Ionic app development is rapid, simpler, and efficient compared to the other two. However, the other two frameworks are given priority when it comes to native-like performance. Developers have said that the Android components in React Native are less reliable than iOS components.

NativeScript development is the most favorable choice for cross-platform apps as it gives the 100% native API access in order to generate a smoother, flawless, and amazing user experience.

Ionic is not ideal for developing graphics-intensive apps because every time you need to wrap application in a native container that can decrease your app’s performance.

If we talk about ease of development, React Native recommends using React, NativeScript allows you to use TypeScript, JavaScript, Angular, or Vue. js, and Ionic uses Angular.

React Native is suitable, when:

React Native vs. NativeScript vs. Ionic: A Quick Comparison

What Will You Select?

In order to choose the best one, you need to analyze every small factor including cost, time, targeted platforms, and nature of an application. However, you can always go for expert advice from top React Native development company that holds vast experience in developing various apps using modern technologies. SPEC INDIA is one of the leading React Native development companies offering customer-centric, reliable, and faster app development services. We also offer a wide range of services across many industry verticals by combining years of experience, right skill sets, and the right approach.

How did you find this whole comparison? If you feel something important is missing, you can tell us via comments below!