The digital experience today is supposed to offer a fast, reliable, and convenient experience. And to meet these requirements, software development practices are getting smarter and leaner. CTOs, product managers, software executives, process specialists are looking for newer ways to enhance the trustworthiness of their software systems without any compromise on the speed and quality.

SRE and DevOps are two such software methodologies that are popular today, in the world of software development. What does SRE stand for? SRE stands for Site Reliability Engineering. Both these procedures are supposed to be sharing a similar line of principles and goals that makes them compete. They look like two sides of the same coin, targeting to lessen the gap between the development and operation teams. Yet, they have their own distinct characteristics that make them contrast. Rather than being two competing procedures for software operations, SRE and DevOps are more like pals that work together to solve organizational hurdles and deliver software in a fast manner.

It is interesting to understand what these concepts individually mean, what they have in common, how they differ from each other, and how they fit each other like missing pieces of any puzzle. Isn’t it curious enough to understand how these two practices co-exist in the same space, riding high on their popularity quotients and maintaining their growing demand in the industry!

Site reliability engineering (SRE) is a discipline that incorporates aspects of software engineering and applies them to infrastructure and operations problems. The main goals are to create scalable and highly reliable software systems.

SRE evolved at Google in its early 2000 as a medium to measure system reliability with engineering and operations practices. SRE has been an apt methodology to be adapted when operations are handled as a software issue. It is a software-first approach that assures good health of huge, complicated systems and continuously oversees the reliability and scalability of systems. SRE is responsible for sharing information between the development and operations team, making the entire process easy and flexible.

What Is Site Reliability Engineering?

SRE talks more about how things are to be done and what are the team priorities. It is a discipline that considers different phases of software development and its relevant application to IT-related tasks. SRE deals with stakeholders to finalize on Service Level Indicators (SLI) and Service Level Objectives (SLO). SLI focus on metrics related to time like request throughputs per second and SLO focuses on targets for collective SLI like last 30 days data etc.

SRE teams are continuously creating a balance between the reliability and delivery speed of the systems. They work in such a way that code can be written proactively, and services can be developed to enhance the reliability factor. This reduces the stress put on the operations teams. SRE teams are more focused on production management and operation concepts of any application.

DevOps is a set of practices that combines software development (Dev) and IT operations (Ops). It aims to shorten the systems development life cycle and provide continuous delivery with high software quality.

“Devs are from Venus, Ops are from Mars” – so says Steven Haines. And it is so true. This is one big reason DevOps – the popular technology has been most wanted by the IT community the world over. All about DevOps concentrates on a modern-day cultural practice that focuses on reducing the gap between the software teams – development and operations. It is an engineering culture that aims to merge software development and operation boosting better collaboration and communication among the teams. It shows how the system must behave to get the best results.

Usually, the development team writes the code and gives it off to the operations who are supposed to implement it. The lack of communication between the two teams can lead to an implementation hassle and that is where the role of DevOps comes into the picture. DevOps and its range of services focus on continuous planning, integration, testing, deployment, feedback, and monitoring of software activities within teams. It is a software and service development framework that frames the culture, mindset, and philosophy of teams working on IT projects.

Good Read: What Is DevOps? Simplified In 200 Words

It spans the entire lifecycle of the project based on its characteristics that are required to achieve shorter release cycles, lower expenditure, lesser wastage of resources, and amicable support within groups. DevOps aims to encompass the entire lifecycle, making all procedures continuous following agile methodologies. The collaborative working environment that it creates unites the two teams – development and operations, offering effective results.

While it feels as if SRE and DevOps are contrasting in nature and competitive, actually, they both share the same set of objectives:

Here are certain basic similarities that exist in both and hence are called counterparts of each other:

DevOps And SRE Both, 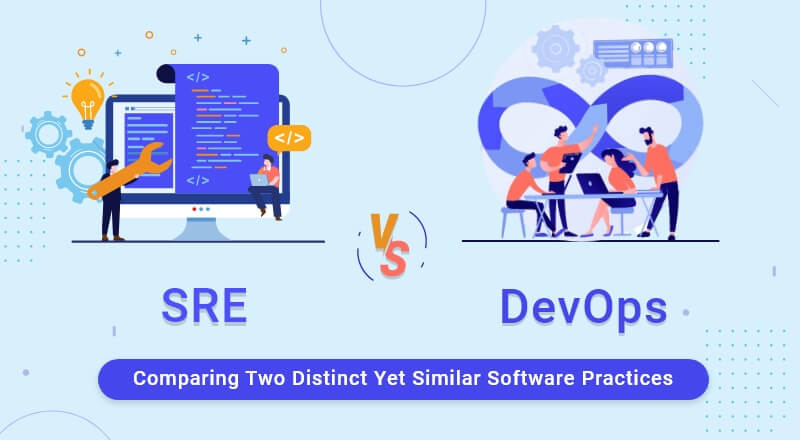 SRE vs DevOps: A Head-to-Head Comparison

How Are SRE And DevOps Related?

It is now a known fact that SRE and DevOps are not two totally exclusive methodologies, they are related to each other. SRE is seen as a specific implementation of DevOps with some distinctive additions.

DevOps aims at showing ‘What to do’ and SRE aims at ‘How to do’.

Here are five fundamental ways in which SRE compiles with DevOps:

The basic DevOps pillars and respective SRE practices that follow:

Big organizations have a complicated structure with multiple teams operating in silos. All teams have their own roadmap and may not be communicating effectively with other teams. This may lead to problems in later stages and heavy costs incurred. DevOps teams help in lessening these silos and make sure that there are no teams formed within teams. They help teams in sharing a common vision and work towards that.

SRE assists in helping everyone get together and come to a common conclusion. With the help of common tools and technologies, SRE shares ownership with developers in creating a common responsibility. It helps solve problems with engineering practices, documents daily processes in a separate playbook, and shares the success of products between developers and specialists.

Though DevOps talks about identifying and resolving issues prior to their occurrence, there are times DevOps will have to accept failure as a routine activity and learn to deal with it. It is not possible to aim for 100% reliability. At such times, SRE is equipped with a set of formulas that balance between accidents and failures as against the newer releases. It ensures the occurrence of errors to a certain limit, not going beyond the error budget that is pre-defined.

Quantifying failure and availability in a prescriptive way, two major identifiers – Service Level Indicators (SLI) and Service Level Objectives (SLO) are meant to measure the failures per request with request latency and the percentage of success of SLIs over time, respectively. These identifiers help in solving the issues as early as possible.

Organizations aim for a faster rate of development, releases, updates, thereby, keeping the teams upright. DevOps, being a modern-day philosophy, does aim for an uninterrupted route to implementation but it believes in a gradual change process. SRE helps DevOps in following a measured process that can proceed faster but with the least failure rate. This helps in reducing the cost of failure, in a big way.

SRE encourages the teams and business owners to move in a fast manner but with lessened failure cost. It balances reliability with the competence to make faster and frequent updates. It believes in an early rollback and believes in validating updates with frequent releases.

One big common point between the two approaches is the strive for automation. Both encourage automating processes that add productivity and profitability for the development and operations teams. They believe in eliminating manual tasks as far as possible.

Measurement Of Most Components

Any automation process needs constant measurement and monitoring, only then can the teams ascertain its accuracy and authenticity. DevOps and SRE both are on the automation front and hence need continuous monitoring. SREs have prescriptive methods to measure outages, uptime, availability, etc. since they believe that system operation is itself a software problem.

These engineers have a job of orienting the task force on prescriptive monitoring of measures. They collect service level indicators (SLI), set service level objectives (SLO), and fulfill service level agreements (SLA). They also train the users on what to do when the measured value falls out of the range. Users could be at any level, ranging from VPs, business owners to developers, managers.

On a Final Note: SRE vs DevOps – Competent Yet Contrast

As we wrap up, it is absolutely understood that the power of both these practices – SRE and DevOps must be combined to yield reliable services, enhanced efficiency, and greater business value. Based on organizational size and requirements, it can be decided which option to choose from but finally, both will work in sync with each other.

DevOps benefits any business that operates with development and operations teams and their own focused goals. The advent of SRE can help strengthen the entire team by effectively monitoring the performance and stability parameters. Looking at the dependency, there are organizations that possess both the teams and leverage the maximum out of them.