WinOps is a linguistic blend of words “Windows” and “DevOps”. It refers to adopting DevOps practices for a Microsoft-centric view. WinOps makes the use of the cloud, automation and integrating development and IT operations to streamline the workflow on the Windows platform with DevOps.

WinOps dedicated conferences are held in London to discover and share the experience of using DevOps’s products and tools in Windows World. 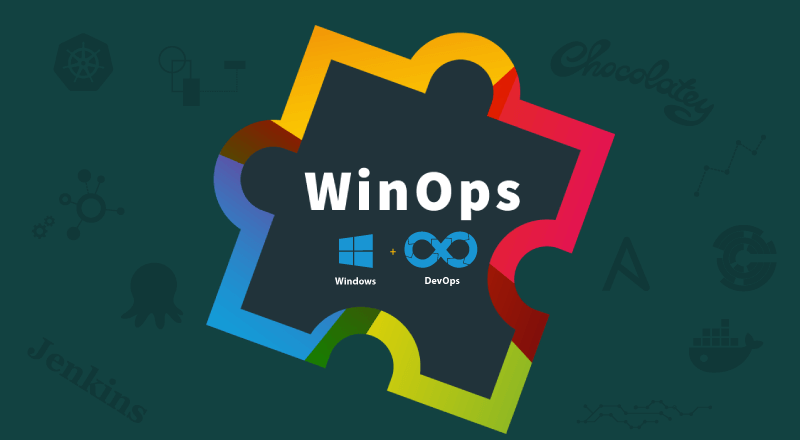 The Core Idea Of WinOps

Tools are a major component for DevOps success. Especially for the Windows Environment, tools are needed to efficiently run an infrastructure that includes various cloud-based deployments, microservices, virtualization, and containers, etc.

As DevOps tools were Linux focused traditionally, it had led the adoption hurdle in Windows-based organization. Although Tool Vendors and Microsoft both have tried to make a Windows version based on Linux tools and features, many organization still find DevOps as an unfit approach in the IT market.

So, to adopt DevOps to the Windows-based organization, it is crucial to realize the cultural differences between Windows and Linux and learn to get accustomed to truly cross development process.

WinOps conferences address the above challenge by using DevOps tools with a Windows approach.

This is how the WinOps came to the scenario.

Microsoft believes DevOps is the key to digital transformation. The company wanted to adopt DevOps for higher agility and faster time to market but the cultural barriers between developers and operations were the obstacles.

However, the rapidly delivering of the quality software was no longer an option but it was a requirement. Thus to standardize the process Windows Development Group adopted Azure DevOps – the cloud deployment solution for DevOps management.

Azure DevOps can track bug tracking, work-item management, code sharing, agile planning, etc. and offers ideal scalability and extensibility. Azure DevOps made their job much easier; they could meet the compliance requirement without bogging down the system with unnecessary data.

Microsoft’s decision to adopt DevOps has helped every engineer and had a greater impact on the quality of the software.

Microsoft uses different DevOps tools for continuous delivery and to share code, track work and ship software; this optimizes workflow leading to the automated software delivery. Let’s have a look at key DevOps tools for managing the Windows.

Octopus Deploy is an automated deployment and releases management tool for modern developers and DevOps team. It is designed to simplify the deployment of ASP.NET applications, Windows Services, and Databases.

Without using any custom scripts, the octopus can hassle-free install, reconfigure, and start windows services during deployment. Octopus uses the same deployment packages across environments and makes it easy to track their progress across those environments.

Octopus Deploy ensures to have consistent and reliable application deployments across Dev, Test, and Production environments.

The automated deployments using Octopus results in the quick delivery of applications and eliminates the tasks that used to be done manually and has an ability to simplify most complicated application deployment.

Docker containers run applications inside an isolated, portable environment and partially isolate the application from the host system in a way it doesn’t impact the way application operates.

Docker containers which were once Linux Technology, now work on Windows too. Docker runs natively on Windows without Linux support and Docker container will run on Windows kernel. The entire Docker toolset including Docker CLI (client), Docker compose, data volumes, etc. are compatible with windows. This means an application can run with minimal computational overhead.

Moreover, it reduces the amount of configuration the admin needs to perform after installing the app. Thus, a Windows server administrator can do more with fewer infrastructures by migrating to the containers.

Docker and Microsoft have partnered to bring agility, portability and security benefits of the Docker platform on Windows Server. Docker simplifies the running of software with a consistent set of commands and provides better portability, environmental consistency, and quicker deployment.

From here, you will get more information on how you can streamline the workflow with Docker.

The chef is a configuration management tool for dealing with machine set up on physical servers, virtual machines and in the cloud.

Although chef servers must be installed on Linux, the chef has support for Windows nodes through various chef cookbooks and chef resources.

Chef and Windows are the best together; chef can be used to automate the windows stack and with that, you can get the desired speed and agility. The chef development kit comes with the development and testing tools to write chef code for your Windows Infrastructure.

With Chef, you can automate and have control over the Windows Infrastructure and in-built chef resources and community cookbooks can be used to manage SQL servers, databases, registry keys, installing windows features and much more. The Chef client runs as a lightweight windows service for easy monitoring.

With the advent of Chocolatey, Windows has a solution to upgrade, manage and automate software for all its operating system. It is a package manager for Windows.

It is a tool that makes installation of the software easy. You just select what you want to install and within few minutes, chocolatey can download and install the software you need without any of your inputs.

Chocolatey makes it easy to install desktop apps and is great for managing packages and software. Chocolatey packages encapsulate everything required to manage a particular piece of software into one deployment. It is trusted by the business across the world to manage their software deployments on Windows.

Puppet is a configuration management tool that consists of a master server running on Linux and supports Windows node.

It is one of the solutions that are trying its best to make sure that windows admin and engineers have the necessary tools to manage the system effectively.

It is commonly used on Linux and Windows to manage multiple application servers at once.

Puppet has Windows-specific modules that can manage many common Windows task without hassle. Whether it is to be supporting DSC resources, chocolatey, Puppet enables to automate the Windows effectively.

Puppet provides the best way to manage and scale all aspects of infrastructure and applications.

One of the most popular configuration management and infrastructure automation products on the market is Ansible.

Ansible provides a simple, agentless paradigm for managing windows, while still providing the native feel to Windows administrators. With Ansible’s easy extensibility, you can write your own modules in PowerShell and extend Ansible for whatever other functionality you need.

If you’re a Windows admin with no experience in Linux and Ansible, you can easily get started and run your first Ansible playbook. The best part is that you don’t need to know the commands used to accomplish the particular task; you just need to specify what state you want the system to be in and Ansible will take care of it.

With Ansible playbook, you can make a positive impact on your organization’s infrastructure, increase ROI, and automate tasks such as deploying services, making user account changes, etc.

Jenkins is one of the most popular tools for continuous integration and continuous delivery. It has the in-built plug-ins and rich functionality which automates almost everything at the infrastructure level.

If used with Windows, you can easily configure this tool the way you want- create containers, build code, push to production, and run a different type of tests. Admins can have access to the outputs so that they can quickly catch when something goes wrong.

Microsoft has even developed a set of open-source plugins which are available on GitHub and helps to run Jenkins on Azure Linux and Windows VMs, Kubernetes and more.

Microsoft has also partnered with CloudBees to deliver the CloudBees Core to the Azure Marketplace. CloudBees is a packaging of a core Jenkins platform supported by CloudBees and advanced enterprise features that secure and optimize Jenkins.

Since the first conference in 2015, there have been multiple meetups and conferences. The main goal of the WinOps is to create a community for Microsoft professionals to discuss and collaborate on implementing DevOps in the Windows world.

After the acquisition of GitHub, Microsoft wanted to improve the software development process by using Azure DevOps.

By working together, employees are aligned to a product and are no longer segmented into development and operations. If employees are not aligned, it places the burden of software creation and deployment on different parties, resulting in the performance gaps and room for misconception.

Azure DevOps is a faster, smarter and simplified solution to Automate Software Delivery. It is the evolution of VSTS (Visual Studio Team Services) and emphasizes on application service delivery at a faster pace without compromising on its quality and performance.

Some Of The Benefits Include:-

Challenges Of Using DevOps In Microsoft

DevOps helps the team to drive continuous delivery and help to make better-informed decisions. The tools and technologies discussed in WinOps conferences help to overcome the cultural barriers with the blend of an appropriate set of technologies. However, it is always advisable to use as per the organization’s need and requirements.