Myanmar, a neighbour having a close cultural bond with India by the virtue of Buddhism and the Colonial Rule, remained a dispirited economy until the beginning of this decade. A bloodied political history marked by military rules and civil wars with arrests of many a political leaders kept entrepreneurs and investors far away from this country for long.

With political stability gradually making its way into Myanmar after the successful democratic reforms initiated since 2008, leading to democratic elections and the release of the most prominent influencer, Aung San Suu Kyi; has set in mood of a modern era in Myanmar. 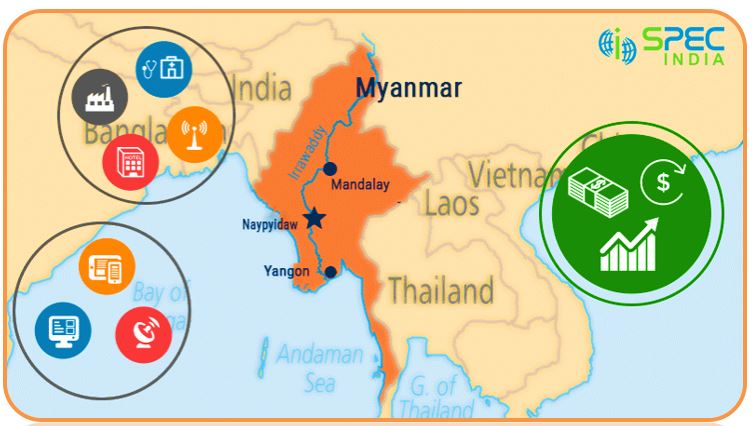 Esteemed dignitaries like the US President Barack Obama, European Commission chief Jose Manuel Barroso and the Indian Prime Minister Narendra Modi, have offered economic aids and promised strategic ties as a definite push to the economy of this resurgent country.

Myanmar herself is prompt in adapting to the new times with the intent of making the most of the opportunities offered thus. Special efforts are being put down in stabilizing the IT and telecoms sector.

Myanmar comes a long way in the last few years for business opportunities empowered by a stable infrastructure for support.

SPEC INDIA to implement a niche ERP in Myanmar

SPEC INDIA associates with a leading FMCG company in Myanmar with multiple subsidiaries catering to a vast consumer base through its strong distribution channels across the country to implement a custom-made Enterprise Resource Planning system catering to the intricate operations of this reputed organization.

With our experience of over two and a half decades of successful associations with Fortune 500 Enterprises and implementations in 25+ countries around the globe, we strike a commendable balance between Cost, Scope and Time for our customized software and business solutions, assuring customer satisfaction and quick Return on Investments.

Our project execution methodologies and quality assurance practices enable us to deliver quality, consistent, on-time deliveries with a rollout for this system expected by the end of this year.

The Ganesh Utsav At SPEC INDIA Begins with Devotion and Delight

SPEC INDIA Welcomes Its Taskforce Back To The SPEC House

Holi 2022 At SPEC INDIA – Splashing Colors and Happiness All Over