“The ones who are crazy enough to think that they can change the world, are the ones who do.”

This was so said by Steve Jobs – the magical mind behind Apple. Apple and its exciting line of devices have engulfed the globe with its innovative design, robust architecture, and modern-day features. Apple loyalists are stuck to the name and the number is fast increasing!

Keeping in mind the current pandemic scenario yet continuing its tradition, Apple had a special and interesting virtual event for iPhone App Developers – “One More Thing” on 10th November 2020. These set of words were a Steve Jobs regular, during keynotes to make big product announcements.

On a similar note, there were exciting announcements made in the virtual rollout that will raise the curiosity bar of Apple users. It was all about the new chip being announced and the new Mac devices, along with.

“One more thing… it’s time to talk about the Mac. Talking about Mac users and the way the Mac changes the world. The Mac has always been about innovation and bold change. We promised that the first Mac with Apple Silicon would arrive by the end of this year. That day is here.”

“This truly is a huge day for the Mac and a huge day for Apple. At Apple, our mission is to create products that play a meaningful role in people’s lives. 2020 has been a year unlike any other in so many ways.” 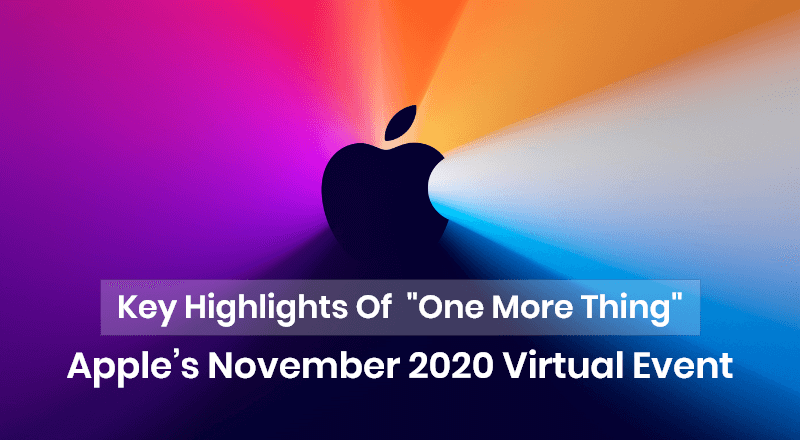 Major Announcements At The Special Apple Event In November 2020

Till this time, Apple had used Intel chips for its computer range. Now on, Apple has announced saying goodbye to Intel and launching its own new processor chip called ‘M1’ – the arm processor for Macs. This was the biggest announcement in this virtual November event.

M1 is Apple’s first commercially available ARM processor, silicon-based, for Mac devices. It is made through a 5-nanometre processor technology and it includes 8 cores – 4 are high performance and 4 are high efficiency. This 5-nanometre technology is one of the most advanced semiconductor manufacturing technology worldwide.

The M1 chip is packed with 16 billion transistors and it integrates the CPU, GPU, I/O, neural engine, and more into a unified tiny chip. All the three major launches of this event will be powered by this tiny wonder.

With the introduction of this chip, the organization aims to attain industry-wide leading performance and features, along with a continuous performance efficiency. Gradually, Apple will remove Intel from its devices and the small wonder chip M1 will take over.

macOS Big Sur Is Finally Available For Its Users

macOS Big Sur was announced way back in June 2020, at Apple’s WWDC. Named after the coastal region of Big Sur in California, this version of Apple OS will now be available for use from November 12, 2020.

The MacBook Air and Pro will execute the latest version of Big Sur. This version gels well with the M1 chips and they will be seamlessly integrated to work their best on the Macintosh devices.

It will be accessible as a free update to those mac devices that are compatible. There will be a newer visual effect, refurbished messaging app, classic startup chime, control center, and other features correspondingly.

The New 13-inch MacBook Air Is Sure To Impress

The new MacBook Air is coming up with certain internal revolutionizing changes, one of which is the introduction of the M1 chip. This device offers 3.5 times faster CPU operations and 5 times faster graphics operations, as compared to the previous versions. It is faster than most of the PC and laptops.

It offers longer battery life – 15 hours of wireless web use, 18 hours of video playback. The current design does not need a fan to cool the machine and hence is silent. The SSDs are faster than before. It has a feature display of 13.3 inches. It can be configured with around 16 GB unified memory and 2 TB storage. It is considered around 9 times faster than its predecessor version.

Because of the increase of transistors in the current device, the number of central processing cores have increased from 6 to 8.

The New MacBook Pro 13 Gets Upgraded

The all-new MacBook Pro 13” is upgraded for better performance and longer battery life. The key highlight here is the introduction of the M1 chip into this device. It also has 3 newer microphones that will offer enhanced sound improvement, especially during video calls.

The two colors available are silver and space grey. The update that is significant is the introduction of the M1 chip. Approximately this device will have a battery life of 20 hours which is almost double of what was offered in the earlier versions.

There is a FaceTime HD camera and a GPU that is five times faster than its earlier versions. Certain features of Pro and Air are similar, but Pro has a slight edge over the Air version. The weight of Pro is around three pounds as compared to the 2.8 pounds of the Air device.

Two new models of Mac mini – Apple’s compact computer are coming out. Both have an 8-core CPU, 8-core GPU, and a 16-core neural engine. The new Mac Mini will come with the powerful M1 chip and promise to be three times faster owing to the chip.

It will have an in-built speaker, Wi-Fi 6 connectivity, headphone jack, and ports for HDMI 2.0 and Thunderbolt USB 4. It comes in two versions and can connect to the Pro Display XDR with 6K resolution. It can be changed up to 16GB of RAM and up to 2TB internal storage.

With this event, Apple has attempted to get everything under one roof, conceptualizing and designing of software and hardware components. As always, the hardware and software go in sync with each other. The new mac devices, the M1 chip, and the macOS Big Sur – all together promise a great experience to Apple fans.

Apple and its innovative self are sure to showcase some really good accomplishments in the year 2021. Apple loyalists are eagerly waiting to use the new wonders!