In 2018’s JSConf, a leading conference for the JavaScript Community, Ryan Dahl presented a talk on “10 things I Regret About Node.js”. He also introduced Deno, a secure runtime environment for JavaScript and TypeScript.

Ryan Dahl is the original creator of the Node.js runtime environment in case if you are not aware. After Node.js, he went on developing a new project called Deno. He introduced it in 2018 and after spending almost two years, Deno’s official version 1.0 was released on May 13, 2020.

This article aims to draw your attention to Deno and its important features. This blog clears all your confusions related to Deno and Node JS Development. 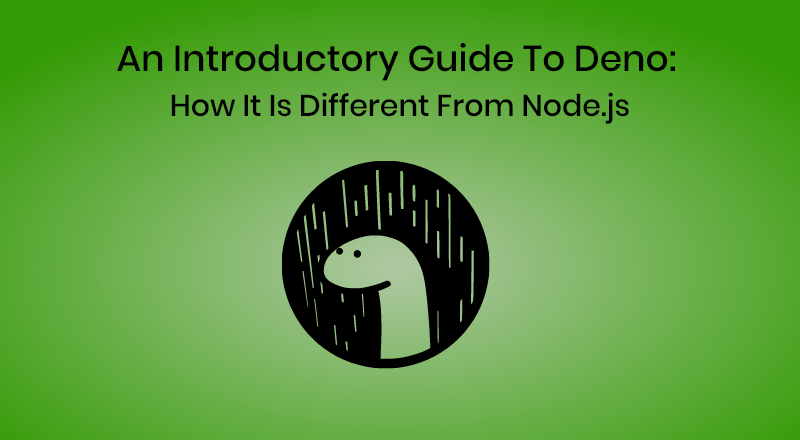 Deno is a simple, secure, and advanced runtime environment for JavaScript and TypeScript which means it executes JavaScript/TypeScript code outside of the web browser just like Node.js. It is created by Ryan Dahl. It uses a V8 engine and is built with Rust programming language.

The Idea Behind Creating Deno

These are the titles you observe over the web when you search for it. As it is from the same creator, the majority of the people have this impression that Deno will replace Node.js anytime soon.

Deno is not created with an aim to replace Node.js. The idea behind creating Deno is to address a wide range of problems through a powerful scripting environment.

The idea behind Deno is their creators’ words:

We feel that the landscape of JavaScript and the surrounding software infrastructure has changed enough that it was worthwhile to simplify. We seek fun and productive scripting environment that can be used for a wide range of tasks.

Node.js is a very powerful and popular platform. It was launched in 2009 and at that time, JavaScript’s state was different than it is now. A lot of improvements have been made and it is now evolved, optimized, and advanced. It is standardized by organizations like ECMA international.

Node had implemented new concepts which were later taken up by the languages in a different way. With a lot of changes in JavaScript and new addition like TypeScript, developing with Node.js has become tedious. There were many architectural mistakes in Node.js explained by Ryan Dahl himself in one presentation. He pointed out several security, design, and legacy APIs issues.

As Node.js is widely used by companies, and a lot of apps are powered by Node.js, it is difficult to make any fundamental change. Deno addresses all these problems and attempts to make the scripting environment fun to work with.

Their creators mentioned that Deno is not a fork of Node.js – it’s a completely new implementation. It is still in development and continuously evolving. It will take more time to get it matured and stable.

What Are The Features Of DenoJS?

One of the most important features of Deno is – outstanding TypeScript (and JavaScript) support without additional tooling. Deno is designed in a way that overcomes the complexity and security issues of Node.js.

Let’s discuss each in detail.

This has been changed in Deno. There is no file, network, or environment access. If needed, it required to be explicitly enabled. Scripts can’t access any hard drive, open network connection, or perform any action without permission. Permissions must be given for accessing hardware, file, or network. Deno code is executed in a secure sandbox by default.

TypeScript offers optional types to JavaScript that facilitate large-scale application development. It is maintained by Microsoft and is a superset of JavaScript. Deno runtime is designed keeping TypeScript in mind and Deno’s standard modules are written in TypeScript. It gives more control for types in your project. Unlike Node.js, it offers first-class TypeScript support.

Deno is easy to install through only one executable file. There is no need to download any extra libraries and set up a development environment. Install it within a few clicks and start developing, it’s that easy!

Deno tries to offer a more complete and ready-to-use environment that makes development easy and fast. It offers a standard set of high-quality modules reviewed by the core team. It leverages modern JavaScript and lessons from Node.js to offer a seamless runtime scripting environment.

Good news for the developers again! There is no package.json file! Deno has its own package manager, unlike Node’s NPM. As we know, when you install any package through npm, all required dependencies needed to be installed and that increases complexity. Deno’s decentralized module system works great here. It offers some built-in tooling to access third-party modules. You can import third-party code or package via HTTP URLs using a syntax that is familiar to modern JS and Angular. Packages are cached locally so that it doesn’t require to be loaded on every run.

Deno is different than Node.js in many things. Let’s compare the Deno vs Node performance and see how they differ.

Deno vs Node: A Quick Comparison

Well, speaking the truth, it is very much in the development phase. It needs to be tried and tested thoroughly to see its potential. When Node.js was launched, it was a revolutionary idea at that time to work with JavaScript for the backend with asynchronous I/O. Node.js a massive success where Deno is evolving gradually.

Due to the same creator and TypeScript support, it has quickly gained the attention of the developers’ community worldwide. Companies will start using it and experiment with different use cases. Meanwhile, Deno is making progress with its improvements, new features, and user base.

Deno is still in the development phase and it is not built with an aim to replace Node.js. It is similar to Node.js but overcomes Node.js’s loopholes in a better way.

It is early to say which is faster. Deno’s advanced libraries and modern JS help it perform better in a high-traffic environment.

If you have experience working with Node, you will be able to learn Deno in minutes. Deno is not yet powerful as Node.js but experience in Node.js will definitely help learn Deno faster when it matures.

No, Deno has its decentralized package management and does not use NPM.

Deno is a runtime environment just like Node.js and executes JavaScript and TypeScript out of the web browser.

No, Deno is a server-side code execution environment and there are many frameworks being built for Deno.

It depends on the requirements. Deno is still in the development phase and continues to evolve.

In general, Deno is not compatible with Node (NPM) packages. It offers a compatibility layer at present but it is not yet completed. In the future, the Deno community plans to support more and more Node programs and out-of-the-box support for it.