In the era of big data analytics and data science, the modern-day solution to handling and managing distributed databases is NoSQL databases. The salient features that NoSQL offers are the need of the hour. Some of the significant reasons NoSQL is most recommended are the ability to manage large volumes of data, speed, easy scalability, fail-over safety, great CPU and memory competencies, faster performance, and no database breakage. And, as we talk about NoSQL databases, the two reigning technologies are HBase vs Cassandra which are constantly being compared.

Both are parented by Apache and hence hold many similarities. Developers are sometimes unable to mark the difference between HBase and Cassandra. But they do have their own individualistic characteristics, which sets them apart. Before we delve deeper into the comparison between the two, let us have a look at them individually.

Apache HBase is best used when there is a requirement for random and real-time read/write access to Big Data databases and huge amounts of structured data. It offers Bigtable-like competencies on the top of HDFS and Hadoop – compression, in-memory operation, and Bloom filters being some of them. HBase is a scalable, column-dependent database for structured data that facilitates effective and accurate management of huge sets of data that are spread out amidst several servers. It offers data replication and the three major components of HBase are Zookeeper, Region Server, and HMaster.

HBase is built on Java and hence offers great support for APIs like REST, Scala, Jython, etc. It has a standalone versioned database that is utilized in the development scenario. It is mainly designed to handle real-time queries in huge tables that have multiple rows and columns and execute across a cluster of hardware. It executes on a four-dimensional data model and possesses scalability and fault tolerance.

What Is Cassandra (Apache Cassandra)?

Powered by Apache, Cassandra is a NoSQL database that can easily manage huge amounts of data in a quick manner hence it is popular among many organizations globally, for its accessibility, performance, and linear scalability. It has proven fault tolerance on cloud-based infrastructure or commodity hardware and proves best for mission-critical information. It can bear data center outages without facing any loss because of its replication across multiple data centers and low latency.

Since it has effective architectural choices, it has an edge over the rest for real-time applications. It is ideal for applications where data loss is not affordable and there are no network hassles. It is easy to add new machines with no downtime hassle since there is a linear increase in the read/write throughput. Cassandra can stream data within nodes while scaling processes are going on, making it a faster and more elastic environment. 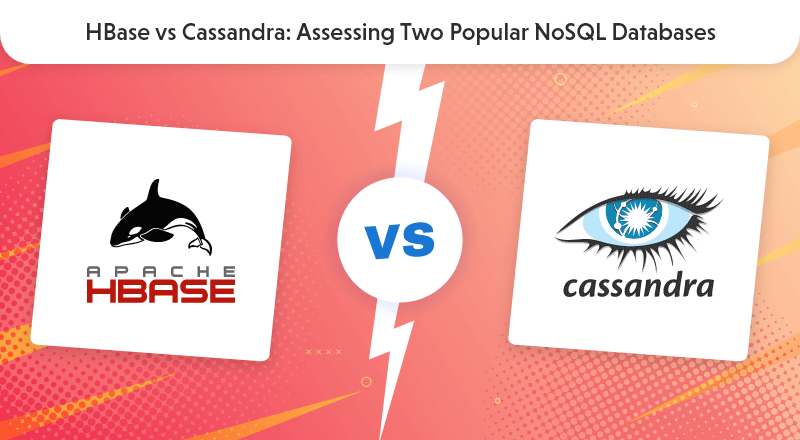 Cassandra vs HBase: The Similarities

As we head towards understanding the differences between Apache Cassandra vs HBase, firstly, have a look at the similarities too:

HBase vs Cassandra: A Head-to-Head Comparison

HBase vs Cassandra: The Conclusion

At first glance, it is a tough call to analyze the difference between HBase and Cassandra, since they both are powered by Apache and hold similarities as mentioned above. Organizations must take a call on which one to choose based on a variety of parameters like accessibility to skillset, project schedules, timelines, budget, etc.

Apache Cassandra vs HBase is a comparison that will go on, but the underlying fact is that both look similar but are not. They have their own characteristics which must be understood and analyzed.