Choosing a technology stack for your business seems a daunting task as there is a wide number of platforms, languages, methods, and frameworks to choose from. Choosing the ‘RIGHT’ technology is even more difficult. This is because organizations need to take many factors into account – budget, business requirements, required resources, and time-to-market.

A wide variety of technologies and frameworks makes it complicated for small businesses and even leading organizations to decide on the ‘right’ technology. Additionally, mobile app development platforms are emerging and offering hybrid and cross-platform development experience.

Developing accessible and user-friendly mobile apps requires a lot of prerequisites including how the app will function, how well it is planned and executed, and most importantly, which tool/framework serve your requirement best.

Mobile app with multiplatform capability, i.e., the cross-platform experience is now supported by the majority of the leading development tools like React Native, Xamarin, Flutter, NativeScript, Kotlin, and so on.

This article compares and offers detailed insights on two leading mobile platforms React Native and Kotlin and the differences between them. 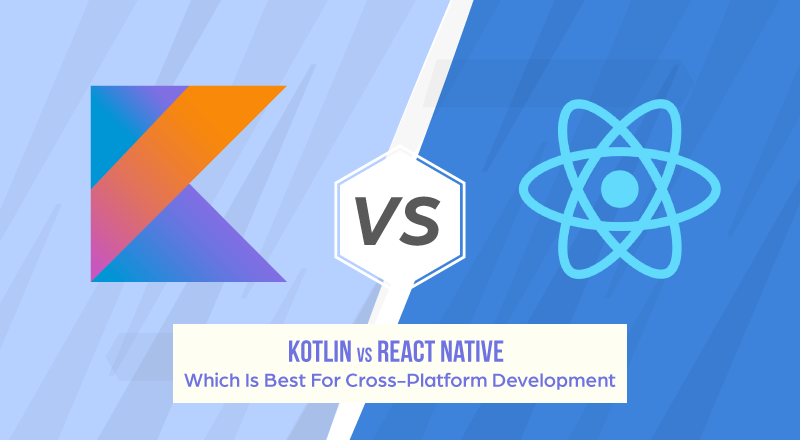 Any comparison of tools – be it from the user’s point of view or business’s point of view depends on diverse factors. This includes performance, learning curve, cost, language support, community, and development time.

Before we go for a detailed comparison between these two cross-platform development tools, let’s know each in detail.

It is developed by JetBrains and made open source in 2012. One of the key benefits of Kotlin app development is its support for multiplatform programming.

Kotlin is in news once again because of Kotlin Multiplatform Mobile – KMM. KMM is an SDK that allows developers to build cross-platform apps. It was launched recently (alpha version) – in August 2020 and quite new to the development world. Developers can use a single codebase for the business logic and only need to write platform-specific code separately.

Built and maintained by Facebook, React Native is an open-source mobile application framework. It is very popular among app developers to build apps for iOS, Android, UWP, and web. This JavaScript-based framework has gained tremendous popularity. React native is used by the world’s leading technology giants like –

Developers can use React – a JavaScript library for UI and JavaScript to develop native-like applications.

It was released in 2015 and quickly became one of the top mobile app platforms. This open-source project became a global success and resulted in wide adoption worldwide.

React Native vs Kotlin Comparison Based On Several Factors:

React Native offers a native-like experience by allowing developers to build apps using JavaScript and native modules. React Native is faster and provides a native look and feel on both Android and iOS platforms. JavaScript is used to interact with native APIs and native components, making app development faster and efficient. It is a great option if you just starting up and you want to increase your user base within limited resources and budget.

However, if your project requires a graphics-intensive app, computation-intensive functions, and seamless UI experience, then going for native app development yields a better result.

Kotlin, on the other side, allows developers to seamlessly write platform-specific code and share business logic already written in Kotlin. Apps written with Kotlin are faster and offer impeccable experience across devices and platforms.

Hot reloading, ready-to-use components, and native development capabilities are some of the key features of react native that makes it a favorite among the developers. Developers find it easy to leverage JavaScript along with native UI to build iOS and Android apps using the same code base.

The multiplatform development capability of Kotlin allows developers to reuse multiplatform logic and write platform-specific code whenever required. This makes development faster and hassle-free. It doesn’t impose any pre-defined way on how you build UIs. Kotlin community is consistently making effort to increase developers’ productivity and enhance the overall development experience.

React Native is widely used by the world’s leading tech companies like Instagram, Uber, Facebook, Tesla, Salesforce, Skype, and many more. It had the 2nd highest number of contributors for any repository in GitHub in 2018.

The thriving community of developers and product engineers are significantly making contributions to this open-source project, making it one of the widely-adopted and mostly-discussed cross-platform app development platform.

Kotlin is famous among Java enthusiasts as it is fully interoperable with Java. After Google made Kotlin an official language for Android app development, it came into the limelight. Kotlin is used by several leading companies like –

A growing community of open-source developers is exchanging knowledge, support each other, and constantly making it a more powerful and advanced programming language.

Both are free and open-source with support from a wide range of libraries and modules. Kotlin apps are also faster to build and require fewer resources than native app development. Teams are smaller in the size and thus easier to manage. Kotlin code can be compiled into JVM, iOS, Android, Linux, Windows, Mac, and other embedded systems. Kotlin makes cross-platform development efficient, faster, and enjoyable.

Despite the maximum use of JavaScript and powerful libraries, React Native has a steep learning curve due to JSX. It is not difficult to learn though as it is JavaScript XML which allows the use of HTML in React.

Due to the wide adoption and potential of React Native, you can easily find developers and required skillset.

Kotlin, on the other hand, offers a very small learning curve as compared to other cross-platform tools. The reason being it is fully interoperable with Java, and experience Java and web developers find it easier to learn and use.

What Are The Pros And Cons of React Native?

What Are The Pros And Cons Of Kotlin?

React Native vs Kotlin: A Comparison From Cross-Platform Development Perspective

With the release of Flutter – Google’s UI toolkit with cross-platform support, React Native is somewhat losing its charm. Both have their own set of limitations and benefits but what to choose and when remains a tough question.

We hope to see Kotlin Multiplatform a big success as it makes it easy to share business logic between multiple platforms and write platform-specific code where it’s required.

This depends on the requirement. Both are backed by powerful communities and used to build cross-platform applications with native platform capabilities.