The whole world is going virtual.

In Fortnite, you can play the game with other avatars and enjoy concerts by your favorite artists on the platform.

Nike, an American multinational corporation offering a range of footwear and apparel, has bought RTFKT, a company that designs digital sneakers and other artifacts.

These are the examples that show where we are standing in the Metaverse concept.

Metaverse is the hottest buzzword in the tech world. It has a very long way to go and we don’t know whether it will enter our everyday vocabulary or not.

We have recently written a blog on What Is Metaverse and also explored Metaverse in detail with its history, applications, and challenges. Now, in this post, we will be talking about Metaverse vs Multiverse and try to explain key differences and fundamental understanding of both. 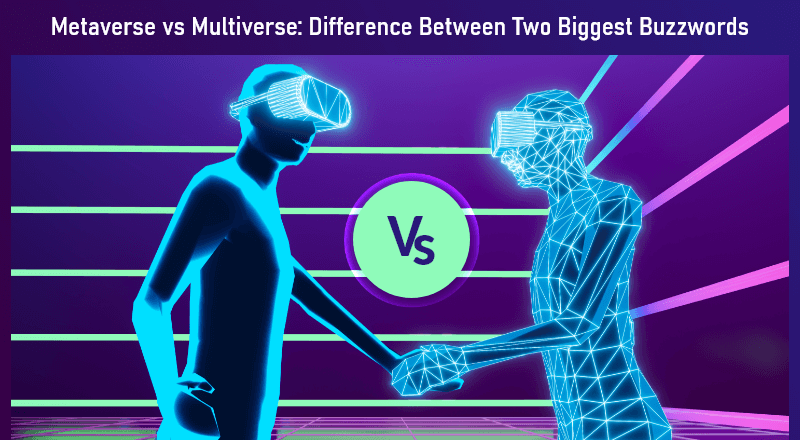 Before we discuss the differences that set them apart, let’s first get familiar with the biggest buzzwords of the tech world.

Facebook’s rebranding as Meta grabbed all the headlines.

In October 2021, Facebook announced that it was changing its name to Meta.

That sparked a lot of interest in the term Metaverse and related concepts. Metaverse is thought to be the successor to the mobile internet but there are many uncertainties.

Metaverse is a combination of 3D virtual worlds that integrates Augmented Reality, Virtual Reality, and AI technologies to create fully immersive and interactive experiences. In Metaverse, users can work, go to concerts, interact with each other, shop, and play through their 3D avatars. It’s not just a virtual world or game, it is a shared, persistent virtual environment that allows users to exist in the virtual world.

Meta, Microsoft, Linden Lab, Epic Games, Roblox, and many other companies are trying to make the best use of technologies to create Metaverse. Though, it can take years to integrate technologies, social media aspects, finance, payments, and objects in one frame.

The development of Metaverse and use cases largely depends on the hardware. Metaverse requires the use of wearable technologies, virtual reality, and augmented reality headsets to create immersive experiences.

Now, let’s see what Multiverse is.

A multiverse is the hypothetical reality of possible multiple universes. According to the Multiverse theory, there can be multiple parallel universes, each with its own set of stars, time, energy, galaxies, light years, civilizations, laws, and anything that we have here in our universe. However, we are uncertain about any of these things and also, most scientists remain skeptical about Multiverse.

It’s just a theory that there would be many parallel universes that exist. The Many World Interpretation (MWI) of quantum physics considers time as an important factor based on which, quantum possibilities exist for parallel universes.

Our universe, as per this theory, is only a part of a much larger set of universes – a Multiverse.

This is the core concept discussed and hypothesized in Physics, Cosmology, Astronomy, and many other fields of study.

Multiverse is also popularized in various kinds of literature, such as science fiction, fantasy books, comic books, and so on.

Now, if we see this in a technological context, Multiverse can be referred to as a theoretical collection of different virtual worlds.

If we see Multiverse in broad terms, then we can say that we are living in the Multiverse era. There are many games available within the virtual world, each with its separate social, entertainment, and commercial aspects. Interconnectivity of one multiverse to another is limited in some contexts as each operates within its own realm.

Now, let’s move to the Multiverse vs Metaverse in detail.

Metaverse vs Multiverse: A Quick Comparison

Let’s discuss some differences in detail.

Multiverse vs Metaverse: How Are They Different?

Both are quite new concepts with their origins dating back many years ago.

Metaverse was first coined by writer Neal Stephenson in his science-fiction novel Snow Crash in 1992.

The term Multiverse was coined by American Philosopher William James in 1865 but in a different context. The concept of multiple universes existed hypothetically in the many fields of study. However, Multiverse in the technology context came from massively multiplayer online games. These games offer multiple instances of virtual worlds that are shared by a small number of players.

The term ‘Multiverse’ was used to describe similarities and differences between these video games. It was somewhat related to the concept of the Metaverse also.

One of the main differences between the Metaverse and Multiverse is their existence. A metaverse is a platform or an environment that is being developed. While Multiverse may or may not exist. There will be no creation or any process; only theoretically it exists.

Interoperability is a critical factor in Metaverse. It means avatars, economies, and systems are unified in one platform. There are many challenges in making interoperable Metaverse a real thing. Interoperability will enable a wide range of applications and that’s how Metaverse handles identity, property, and finance.

When you think about entities, Metaverse will involve more entities than Multiverse. It will include human beings, technologies, devices, platforms, robots, avatars, and so on. Each of these entities has a separate function and role to perform within one unified platform.

In Multiverse, we have only seen different gaming virtual platforms having different features, acts, and traits. Unlike Metaverse, there would be hardly any individual components that are responsible for creating it.

This is going to be another differentiating factor between Metaverse and Multiverse.

As we have said earlier, Multiverse is a collection of several virtual worlds that are not connected. This means assets, experiences, data, and payments will be controlled by a single company that created it. Users can participate in different worlds or buy properties, but collectively they can’t consider as one or extract value from them.

In Metaverse, users will have complete ownership and control over their assets, finance, properties, arts, and anything. In Metaverse, your avatars can get full ownership of NFTs, and virtual properties, or even trade their NFTs on different platforms within the Metaverse.

We are not sure about this as well as about the existence of the Metaverse.

Metaverse is being planned, developed, and sooner it will be launched. A multiverse, if exists, theoretically or practically, will result in multi universes or parallel virtual worlds.

While Metaverse is still in the development phase, we are not sure which will come out on top. Multiverse is just a concept while Metaverse will soon become a platform where people can have their virtual lives. If Metaverse’s universal theory is to be considered, Multiverse could become a part of it. Also, the level of interoperability in the Multiverse is yet to be defined.

There is also a possibility that the Metaverse becomes Multiverse if interoperability between virtual worlds is limited due to diverse platforms. It can be closer to Multiverse rather universal platform.

There is a lot of uncertainty around these two biggest buzzwords at present. To clear the clutter, we must wait until Metaverse becomes a real platform.