Organizations that are using it, can see tangible benefits and improved performance. The idea of sustainability and pace of innovation require stable and secure tech stack for your business applications. Microservice and NodeJS Development is one such tech stack that enables modern-day organizations to achieve agility, security, scalability, and superior performance.

Microservices or Microservice Architecture is a software design pattern (style) which breaks the entire system into smaller, independent, and functional units, each of them is capable to run and scale independently. This concept is widely used by world-famous organizations including Uber, Netflix, Amazon, eBay, Groupon, and many more.

Embracing microservices certainly bring more business value but at the same time, it requires a stable and secure technology such as Node.js to develop apps without complexities. 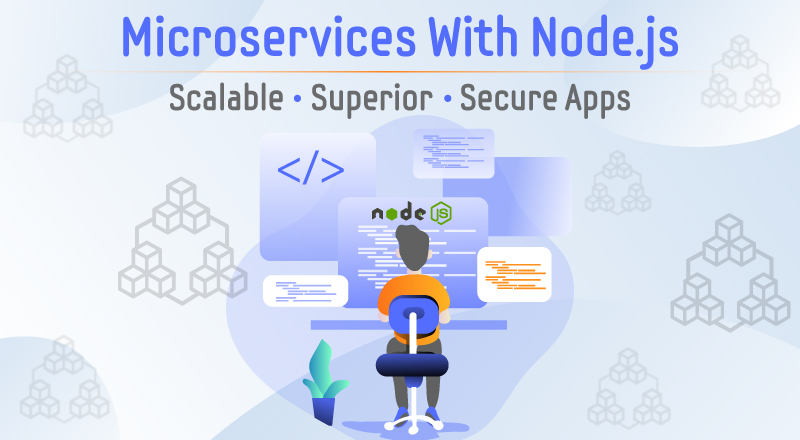 What Is Microservice Architecture?

One of the significant features of microservices is, every part (unit) of the application can be written in different programming languages by different teams.

According to one IDC report,

By 2022, 90% of all apps will feature microservices architectures that improve the ability to design, debug, update, and leverage third-party code.

This approach is very useful for the larger teams as they can update, scale and test microservice separately.

The main idea behind Microservices is to create small, functional pieces of an application, which is totally contradicted to the traditional, monolithic approach where an application is developed as a whole. Here is how it looks:

This technique is not new; it’s a form of Service-Oriented Architecture (SOA) which deals with independent products, technologies, and vendors, communicating with each other over a network.

Due to incredibly faster performance and ability to handle concurrent requests, a number of tech giants are using Node.js in their environments across the globe including Netflix, LinkedIn, Trello, Uber, PayPal, Medium, eBay, NASA, and many more.

Connection Between Microservice and Node.js:

The connection between microservice and node.js is very strong.

Node.js is designed to build highly-scalable apps easier through non-blocking I/O and event-driven model that makes it suitable for data-centric and real-time apps.

Microservices, on the other hand, makes it easy for the developer to create smaller services which are scalable, independent, loosely coupled, and very suitable for complex, large enterprise applications.

The nature and goal of both these concepts are identical at the core, making both suitable for each other. Together used, they can power highly-scalable applications and handle thousands of concurrent requests without slowing down the system.

Microservices and Node.js have given rise to culture like DevOps where frequent and faster deliveries are of more value than the traditional long development cycle. Microservices are closely associated with container orchestration, or we can say that Microservices are managed by container platform, offering a modern way to design, develop, and deploy software.

What Are The Benefits Using Microservices And Node.Js?

Building an application requires not only powerful technology, but a sound business idea, modern architecture, and well-defined strategy to create a successful application.

By using modern software development techniques and technologies like Microservice and Node.js in app development, you will be able to see a number of clear advantages and those benefits are mentioned below:

Large-scale systems are complex and difficult to analyze, conceptualize, develop, and maintain. When you split the system into smaller, independent units with microservice, it would be incredibly easy to update, deploy, and maintain. Also, it reduces your time and cost as you have to update only one specific component based on the needs.

With Node.js and use of microservice, it will be easier to design new features and implement changes in the current architecture. Microservices are easily deployable, and that too more frequently, enabling developers to concentrate more on coding and development standards rather than architectural issues.

As both, node.js and microservices are known for building highly-scalable apps, you can easily scale up the small component with fewer resources. Exceptional performance and scale-when-you-need allow developers community to achieve more with less.

Node.js uses APIs and modern databases which facilitate building complex apps without taking years of efforts. In addition, there are thousands of open-source libraries from the open-source community that accelerate app development. With unified JavaScript development stack, Node.js allows reuse of the code between client-side and server-side.

Along with that, maintaining the system would be trouble-free for developers because of loosely-coupled and independent services.

Since microservice architecture is split into ‘smaller’ components across the business domain, it increases the collaboration and understanding across the teams. Also, adding new features into microservice would be much easier for the developers than adding into traditional monolithic development pattern.

Easy learning curve due to JavaScript, the flexibility of Node.js, scalability, and ease of development in microservices will benefit businesses and help developers make business-centric apps that are in line with business objectives.

Node.js Is Good Choice For Microservices Because:

It seems like Microservice and Node.js are built for each other because they are closely connected.

The fundamental goal of both (one is technique, other is runtime environment) is same – to make scalable apps faster and thus, saving time and cost.

Do you want to use microservice architecture in your next app? Do you think it would be a good fit for your business idea?

Talk to our Node.js experts to develop modern, scalable, and engaging apps.