This is a second part in the PWA series with a detailed comparison of PWA with other types of web presence such as responsive web design, native app, and accelerated mobile pages (AMP). The first part of this series highlights the history, success stories, and advantages of using PWA (Progressive web app).

Needless to say, PWA is a talk of the town at present. 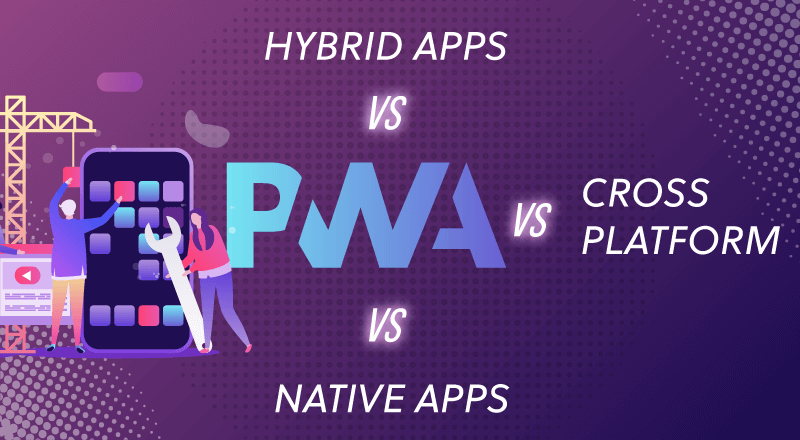 To understand this clearly, we are taking below factors into considerations:

Many readers have this confusion.

A native app is a truly native mobile app with all native-app qualities. It is coded for a specific platform such as Android and iOS. A native app can access the features of the hardware and operating system to provide an unparalleled user experience.

A progressive web app is an advanced form of web application which looks like a mobile app and it runs in the browser. It provides native-like user experience right in mobile browsers creating the engaging, fast, and reliable user experience. It can be accessed on multiple platforms (mobile and web) using the same code.

Appealing user experience is fundamental for a successful online presence.

Leveraging full accessibility of hardware and operating system’s features, the native app offers seamless user experience. It’s true that native app wins the battle in terms of user experience and it will continue to do so.

Similarly, with an advent of modern web technologies such as HTML, CSS, and JavaScript, PWA also offers app-like experience. It acts as an app irrespective of browsers and network conditions.

The Cost To Build An App

As you need to make separate apps for different platforms, native app development, normally, will cost you more.

Progressive Web App Development, on the other hand, continues to be cost-effective due to its cross-platform feature. Push notification, app-like experience, offline use, and faster loading make PWA a great choice for today’s business needs.

There is no need to build a separate app for different platforms. Therefore, it saves your lot of money. Also, there is no need to learn any new technologies and hire a number of resources to get it built. Remember, it is basically a web and does not require more time to launch.

When it comes to PWA, service workers are the main attraction. Apart from that, Manifest, AppCache, and Indexed Database are among the useful features of PWA.

How Does It Work?

What Is A Service Worker?

Service worker acts as a network proxy and makes your web app offline-ready. It allows you to control network requests and provide offline access so that the users who have slow connectivity and no-connectivity can use the app.

Furthermore, service workers are base technology for amazing features such as push notifications, background sync, and mainly rich offline experience.

Nearly, more than half of the total number of app uninstalls happen due to too much storage space occupied by the native applications.

Interestingly, 3 out of 10 apps installed end up being uninstalled within 30 days of a download, according to the Appsflyer. There could be many reasons behind the uninstall of an app but the large size of an application plays a bigger role.

The native app generally occupies more space in memory and that triggers uninstall of not-so-useful app frequently. Contradictory to this, PWA solves this problem as PWAs are an advanced form of web and they don’t take up much memory as the native app does.

Also, technologies like service worker and Indexed Database make it more powerful and accessible regardless of the connection status and speed. It functions well on 2G networks and also stores content for offline accessibility.

Taken as a whole, PWA is a great choice in terms of user engagement along with the ease of storage and less data consumption.

So, When To Choose Progressive Web App Over Native?

It’s clear that PWA is different than the native app. But, there are several native features accessible on PWA.

Take a look at this table to clearly understand the differences and similarities.

Choose Progressive Web App for your business when you want to target mobile-first users on the mobile web platform with superior, native-like app experience at the significantly lower cost compared to native apps.

Every Coin Has Two Sides; Similarly, Here Are Some Disadvantages Of PWA:

Cross-Platform Vs. PWA: A Wrong Debate?

Yes, that doesn’t make any sense. Why?

However, Apple is currently working on supporting PWA features in their environment. Cross-platform has become a popular strategy for those who want to leverage both the platforms (web and mobile) and provide app-like, highly-reliable, and seamless user experience using a single code. So, it is pointless to discuss cross-platform vs. PWA because cross-platform compatibility is the most sought-after feature of PWA.

Progressive Web App vs. Hybrid Apps: What Are The Differences?

Now, we are comparing progressive web app with a hybrid app to see the benefits of choosing PWA over Hybrid apps.

A hybrid app is created using the web and native technologies and uses a wrapper technology which makes it look like a native app. It can be used on different platforms and unlike web apps; it can access devices’ features.

Key Difference Between Hybrid And PWA:

The key difference between hybrid and PWA app is hybrid apps are visible in app stores and can be distributed via app stores such as Google Play and iTunes. Remember, this can’t be done when you go for a progressive web app.

These Famous Apps Are Hybrid Apps:

What Is Right For You?

Are you still unclear about what to choose for your business?

That happens. We can help you out picking the right approach to mobile app development. In fact, choosing the right type of mobile app depends on several factors like budget, requirement, audience, time-to-market, features, and so on. We have been working for 30 years to craft a digital journey for our valuable clientele that includes large enterprise, SMEs, and Fortune 500 companies. We have helped many clients scaling up their digital transformations through the use of modern technologies and a customer-first mindset.

Do you own mobile app for your business? Planning to build one? We can help! Ask us for the best possible solution.