As our reliance on data increases, the need for handling the information flow between various elements increases. Devices, applications, services, and software need to communicate with each other and that is where developers use message brokers to exchange the needed information. Even Microservices – the latest jargon today communicates with each other in an asynchronous mode, through message brokers.

RabbitMQ and Kafka are two popular message brokers that pass messages between the producers and consumers. The message could have any type of information, for e.g., information about an event or plain text message triggering a parallel event. These systems are perfect to connect various components, build microservices, manage real-time data.

Before we compare these two tools, let us quickly understand the concept of a message broker.

What Is A Message Broker?

Asynchronous communication is generally managed via a message broker. Choosing the right message broker depends upon various parameters like persistency of data, the number of messages sent per second, and the competence of the consumer.

A message broker is needed when there is a requirement to control data feeds and put data to several applications without much use of APIs. It helps in dividing the publisher and consumers, store, route, check and organize messages.

RabbitMQ is the most widely deployed open-source message broker. RabbitMQ is used worldwide at small startups and large enterprises. RabbitMQ is lightweight and easy to deploy on-premises and in the cloud.

RabbitMQ is a routinely used message broker that handles high throughput conditions like online payments. It also deals with background jobs and supports different protocols like STOMP etc. It effectively delivers messages in complicated routing situations. It is seamlessly compatible with current technologies and can be enhanced through different plug-ins. In case there is a network failure, brokers can be distributed to be more accurate.

RabbitMQ is a distributed broker since it executes as a cluster of nodes in which the queues are distributed as against the nodes, for fault tolerance and high-end availability. It is based on a push model that is considered best for low latency messaging and queue-based architecture.

Kafka is competent to enable applications for processing, persisting, and reprocessing streamed data. It makes use of a routing key for sending messages through a direct routing approach. It is known as a distributed event streaming platform. Here, messages are written at the end of the log and customers can choose from where to read that.

It offers a great degree of availability and can be clustered across multiple servers. In Kafka, the producer is responsible for writing and storing messages in the cluster whereas the consumer is responsible for consuming messages from the cluster. Kafka works on a pull-based approach in which users can ask for message matches from specified offsets. It gives an adapter SDK to let developers create their system integration. 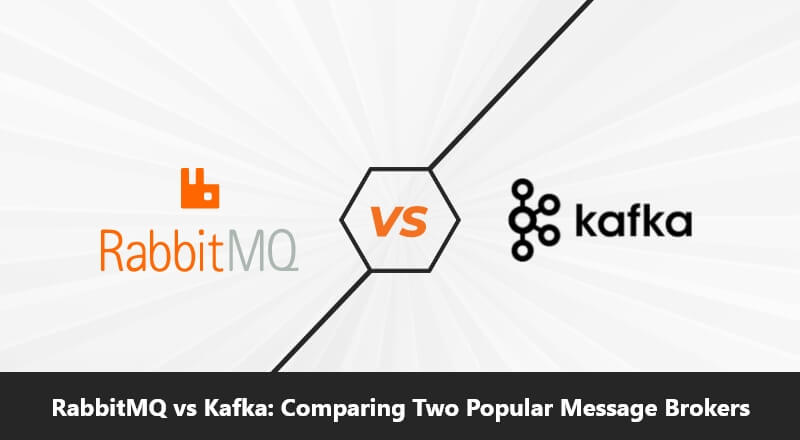 RabbitMQ vs Kafka – A Vivid Comparison

Since both are message brokers, there are certain key similarities that are distinctly seen:

The above comparison has thrown light on the similarities and differences between the two popular message brokers. Comparing RabbitMQ vs Kafka is like choosing the better out of the best. To each its own! While RabbitMQ and Kafka are often thought of as interchangeable, they have different implementation purviews.

Finally, it depends upon the user requirements. Both are fit to capture millions of messages per second, though they both have their own individual architecture.