We always do that. Searching best will give you a standard list of popular options but deciding best depends on one’s requirement. Keep in mind that there is no perfect framework, language, or tool exists. Each has its pros and cons. In software development, it’s important to choose the right tool for the right job. To make the selection easier, we are here to help you select the right framework for iOS app development.

While the battle between cross-platform app development and native app development is still going on, we will be talking about React Native vs Swift in this post. We will compare both options based on several factors and also help you decide what to choose and when.

React Native vs Swift: Who Wins At Where?

Before we go into a detailed comparison, let’s go through the quick introduction of each.

React Native is immensely popular to build cross-platform apps and it powers thousands of app that include the world’s leading apps and platforms – Facebook, Flipkart, Instagram, Pinterest, Wix, Walmart, Salesforce, Tableau, Coinbase, Skype, Bloomberg, and so on. You can use a single codebase with platform-specific versions of components so that you can enjoy the benefits of cross-platform along with native capabilities.

Swift is a multipurpose, multi-paradigm, compiled language created by Apple Inc. It is widely used for macOS, iOS, Linux, tvOS, iPadOS, and watchOS. Swift is the preferred choice for iOS app development and it dominates the market with a large user base and a strong community. Swift is a modern, performant, faster, and powerful programming language.

Swift is being used by a large number of organizations and companies that include Facebook, Uber, Accenture, WhatsApp, Slack, Lyft, LinkedIn, and so on. 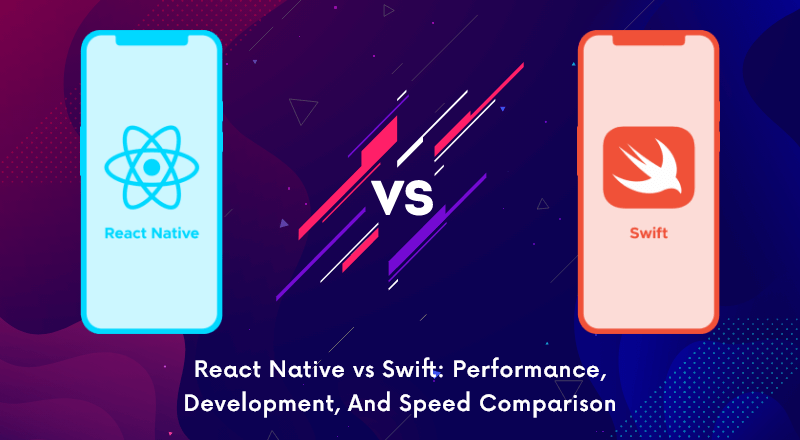 Please note that, here, we are not talking about native development vs cross-platform development. As both choices are popular and widely used, our comparison context is to find which option is best suitable for developing iOS applications and when.

Swift was developed as a replacement for Apple’s programming language Objective-C. It was introduced at 2014 WWDC. It is equipped with modern features, simpler syntax, and lightning speed. Being an open-source project, it has great community support and an active community.

As it is backed by Apple, you need not worry about its future and enhancements. The Swift community is constantly working on making Swift the world’s best general-purpose programming language.

On the other side, React Native enjoys the top position in the cross-platform market. React Native is based on JavaScript and allows developers to reuse code between different platforms which will significantly reduce development time.

Again, React Native is an open-source project and supported by Facebook. In 2018, React Native had the 2nd highest number of contributors for any repository in GitHub. It has a very active community and is supported by contributors and companies around the world including Microsoft, Callstack, Expo, Software Mansion, and Infinite Red.

Both, React Native and Swift has great community support and are community-driven.

Which framework or language is more efficient?

Usually, the performance of any app depends on the features involved, and how frameworks work, or how it builds an iOS app.

Performance is based on several other factors as well such as CPU usage optimization, memory, and architecture. React Native takes more memory than Swift. CPU usage optimization is slightly better in React Native than Swift. Swift is a successor to C and Objective-C languages. It uses the high-performance LLVM compiler technology that results in incredible speed and performance.

Well, there is no such noticeable difference you can see in performance when you compare apps built with React Native and Swift. The only difference is RN takes more memory space than Swift and that can make difference when you want to build a feature-rich, graphic-sensitive app.

Having said that, both offer great performance. It is not always the case that native app should win over framework-based apps.

Swift enables developers to create beautiful UIs and visually-appealing apps across all Apple platforms. Developers can build UI elements from scratch using SwiftUI to deliver a completely-native, better user experience. Developers can create UI by simply dragging and dropping components and editing those as per the requirements.

However, JavaScript makes UI creation very easy in RN but it is quite difficult to keep up with constant changes and advancements that are happening in the native environment.

Speed, learning curve, code maintainability, and resources are some of the variables we will take into consideration.

React Native: If you choose to develop a cross-platform app, React Native is best as you can share code between platforms and you can have maximum code reusability. Hot reload of React Native helps developers do changes faster, resulting in easy edits and faster development.

React Native: It is easy to learn as many developers are familiar with JavaScript.

Swift: It is a modern programming language and an alternative to Objective-C. Many resources are available for Swift that makes it easier to learn. It has a smooth and easy learning curve for entry-level developers and students.

React Native: Upgrading and debugging code in RN is not smooth as Swift. Also, there are many things that have third-party dependencies and libraries. This becomes difficult to manage every time that may slow down overall performance.

Swift: It is easier to maintain and test. With expressive and lightweight syntax, code written in Swift is clear and clutter-free. Also, the Swift community makes upgradation easier, and every year new version is released with enhanced features and improvements. It makes use of REPL (read-eval-print loop) to cleanly debug and run the program within the development environment.

React Native: You will easily find React Native developers as many developers are turning towards JavaScript-based technologies which is a promising career.

Swift: Swift is ‘Objective-C without the baggage of C’. C is widely adopted by developers and it is one of the major languages to start a development career. You can easily hire experienced iOS developers to build truly native apps. The rate of iOS developers may vary based on location, time, app features, and project type.

When To Choose What? React Native or Swift?

Let’s quickly go through the advantages and disadvantages of each solution for iOS development.

Let’s quickly summarize the differences between React Native and Swift through this table.

Finally, this debate can be centered around another context of cross-platform vs native development but here we have taken an iOS context. Both are great solutions for developing iOS apps but to ease decision-making, here is the clear suggestion: choose React Native when you are targeting more than one platform and go for Swift when you want to leverage native platform capabilities.

If you want to build an app that is not too complex, you will see a negligible performance difference between both these options. If you want an enterprise-level, feature-rich, and heavy-graphic app, go for native, i.e., Swift.

What are you using for developing an iOS app?