You may find tons of webinars, books, web pages, articles, talks, projects, and conferences on serverless architecture over the web. The term ‘serverless’ has redefined how software is built, deployed, and consumed.

The big four cloud vendors in the IT industry – Amazon, IBM, Google, and Microsoft have launched many products and services that represent the potential of this technology to radically change how software is built.

In this article, we will explore what does serverless mean and what are the benefits, limitations, and future trends revolving around serverless architecture in software development. 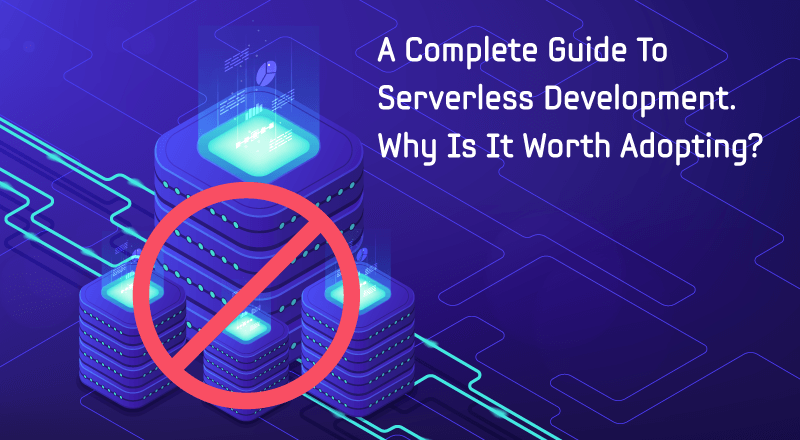 This guide is intended to answer all your queries regarding serverless.

Let’s start with the basic question.

As its name suggests, logically, there is no elimination of servers. Serverless refers to the software architecture where developers can build and run the application without having to worry about infrastructure provisioning and management.

Serverless is a backbone technology of modern software development. It completely removes the burden of managing, scaling, and maintaining servers. Generally, managing servers, deploying code, and adding/removing resources are time-consuming tasks that require hours of work and experienced professionals.

Serverless has changed this. It has freed developers from the responsibility to manage backend so that they can focus on the product instead of managing and maintaining servers.

A Brief History Of Serverless:

Serverless – this term became popular after AWS Lambda was launched in 2014.

These companies have played a pivotal role in the popularity of serverless.

There are many definitions, models, and manifestations of serverless computing that are available in the software world. However, the core concept remains the same in every model – eliminating the need for managing servers when building software.

It is categorized into two architectural design approaches:

BaaS (Backend-As-A-Service) refers to the model where third-party cloud vendors maintain and offer services like database management, authentication, hosting, and push notification. Developers only need to look after UI and frontend code. The Mobile Backend-As-A-Service (Mobile BaaS) is a popular model in cloud computing. BaaS represented the idea of developing apps without managing servers by developers themselves

FaaS (Function-As-A-Service) is one type of serverless computing where developers can build, manage, and run business logic, function, or a piece of code without having their own servers. This code can be programmed to execute code in response to certain events or specific schedulers.

The popular example of FaaS is AWS Lambda which is an event-driven, serverless computing platform.

A 2020 DataDog Survey indicated that over 50% of AWS users are now using the serverless AWS Lambda FaaS (Function-As-A-Service).

“I think of serverless as a development infrastructure as a service, where you’re orchestrating things together without having to think about the physical architecture underneath at all. “
– DEREK TIFFANY

Why Serverless? How It Is Helping Organizations Meet Modern Development Needs?

In a nutshell, serverless is a cloud computing execution model where cloud providers run and dynamically manage servers.

These points are important to understand.

Talking about first, Developers no longer need to pay attention to the complex infrastructure and server concerns. All they have to do is development and focus on enhancing the product. This saves a significant amount of time. Serverless architecture also allows developers to focus on the task they are hired for – development.

The cloud service providers dynamically allocate the resources and charge for the resources actually being consumed. This is opposite to the physical hardware setup or traditional cloud resources that offer fixed-price models and occupied resources.

Organizations that have already moved to the cloud are likely to explore serverless and realize the benefits of it soon.

What Are The Other Benefits Of Serverless Architecture?

The abstraction of the server layer leads to happier development teams and offers many significant benefits to the IT world.

Generally, developers have to manage servers, databases, and network requirements. This results in longer development time and more operational overhead. Now, with serverless, resources are automatically allocated and scaled, paving the way for faster time-to-market of applications.

Modern development is more about agile and devops environments where continuous integration of code and frequent deployments are important practices. Serverless makes it easier for organizations to achieve this via automated code changes and faster deployments.

This is the reason developers enjoy building apps with a serverless architecture. Infrastructure management considered tedious, monotonous, and time-taking tasks. A fully serverless system requires no administration and this benefit is huge for the majority of the IT companies where specific network administrators are hired to set up and maintain the infrastructure.

Scaling resources is super easy with serverless. There is a dynamic allocation of resources to execute certain functions by auto-scaling its capabilities to fulfill the requests. Easy scalability makes serverless one of the promising development architecture.

Furthermore, zero fault-tolerance and high availability of resources are extra advantages. Developers don’t need to maintain and constantly check for the availability of servers and the resilience of systems. These are built-in characteristics when you chose serverless.

The pay-as-you-use policy ensures that you only pay for the resources you actually use. There are no hidden costs associated with the always-on mode of servers. Developers need to pay for the actually utilized resource and not for the 24*7 availability even when your resource is inactive/idle or your code is not running.

If you chose serverless, you don’t need to worry about several security issues like DDoS attack, OS dependencies, bots and scrapers, and others. Serverless service providers enforce runtime validation and authentication which makes it a more reliable, secure, and well-organized architecture.

However, along with plenty of advantages, there are some serious drawbacks too.

What Are The Limitations Of Serverless?

When you think serverless in a detailed scenario, you are transferring controls to some third-party vendors about your code and backend. You may face forced upgrade, downtime, unexpected cost change, and other constraints. Though, these kind of concerns are rare and doesn’t happen every time.

This is one of the potential setbacks of serverless architecture and this is the reason people avoid using it. Vendor lock-in refers to the dependency on one vendor for services and products.

If you are using AWS Lambda and want to switch to Google Cloud Function, it will require changing a significant amount of code, architecture, and tools. The same feature is implemented differently by other vendor and there are architectural differences too. You are nearly unable to move or change vendors because this will create a lot of work and extra cost.

Functions help modularize systems in smaller parts, and therefore, it becomes clumsy to manage too many functions sometimes. Also, debugging, testing, deployment, and packaging concerns sometimes exist in a serverless architecture. Integration testing is tough and you have to rely on vendors for debugging and monitoring tools.

Even though serverless are safe and mitigate the risk of attacks, there are many other risks of using serverless exist. One of them is poor configurations of applications. To solve this, you need to assign correct and secure permissions so that function can be executed securely. You need to select and choose wisely when it comes to permissions and choosing vendors with the most secure architecture.

Also, you need to check for built-in security provisions before choosing any vendor.

Here are some leading serverless vendors you can choose from:

Among all of the above, AWS Lambda and Azure Functions are considered best and complete services.

Serverless Or Microservices Or Both? Which Is Better?

Microservices allows developers to build smaller, separate services that are independently deployable and scalable. It helps developers divide code in smaller chunks, therefore, bringing more clarity and isolating concerns. This practice is very popular among the developer world and offers a wide range of benefits.

Good Read: Microservice Architecture – Is It Right for Your Enterprise Software Development?

On the other side, serverless has its own set of potential benefits and limitations. In a hybrid model, where organizations merge these two architectural styles to leverage the strengths of both. However, this combination cause lot of confusion because of different styles, workflows, and requirements.

Organizations have to choose one suitable, sustainable, and secure architecture to meet modern development needs.

Which architecture style do you use in your organization?

Are you planning to adopt microservices or serverless?