When a successful platform or a product becomes obsolete, one of the main issues users face is to find an alternative that is compatible with all existing requirements. Technology obsolescence has adverse impacts on businesses. Staying up-to-date with lifecycle and version changes is vital for organizations to effectively address the challenges of obsolete technologies.

You might have faced such kinds of challenges in the past if you are using Microsoft products. Normally, when any leading software providers declare end-of-support of a product, it means users should not use the product because they will no longer provide support and updates, resulting in compliance, performance, and security issues. 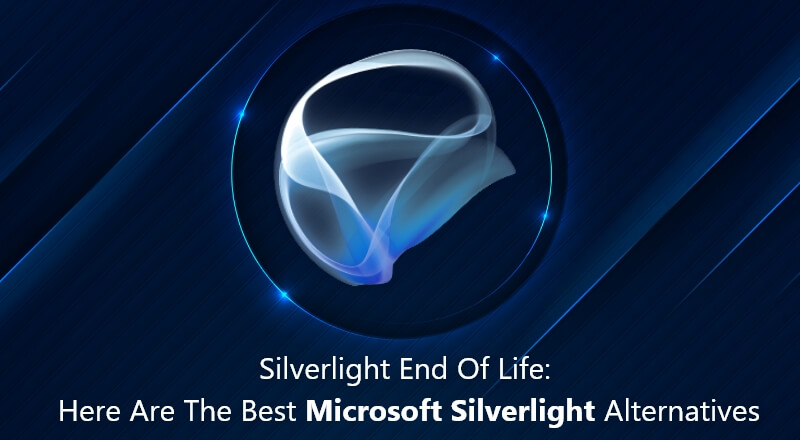 What Do You Need To Know About Microsoft Silverlight?

It is a deprecated technology. It is an application framework that enables developers to create rich web applications and media experiences. It is similar to Adobe Flash, an all-purpose plugin for executing rich multimedia applications, graphics, animations, and streaming audio-video to devices. It is a free plugin powered by the .NET framework and works with all major browsers, operating systems, and devices.

Note: Currently, it is only supported on Internet Explorer 11. Microsoft plans to terminate support for this last browser, IE 11 on October 12, 2021. Support for Chrome, Firefox, or any Mac OS browsers was already ended a few years ago.

Before we discussed what happened to Microsoft Silverlight and a brief history about it, let’s first quickly jump to the best Silverlight alternatives.

Blazor is a free and open-source framework for building client-side web UI with a .NET framework. It is being developed by Microsoft that lets a developer create rich interactive UIs using C#, HTML, and CSS instead of JavaScript.

It works with all modern web and mobile browsers and it is a part of ASP .NET Core. Blazor uses WebAssembly to execute client-side C# code directly in the web browser. Developers can reuse code and libraries from the server-side as well.

Blazor is a low-level assembly-like language for modern web browsers. It is an open web standard and offers a portable compilation target for languages such as C, C++, C#, and Rust so that code written in these languages can run on the web. Not only this, but it also allows JavaScript to work together along with these languages. It makes execution faster, efficient, and safe.

Blazor WebAssembly is a Single-page Application (SPA) framework for building, rich, interactive, front-end apps. Migration of Silverlight app to Blazor platform is easy as Silverlight is famous for its design pattern, MVVM (Model-View-ViewModel) which allows separation of concerns.

When it comes to the web, there is no stronger technology than HTML.

When Silverlight was launched in 2007, many developers and observers had predicted the future of Silverlight very early. While for web, Silverlight quickly became popular and on the mobile front, it was limited to Windows Phone only. It was the primary development environment for Windows phones.

Netflix had used Silverlight for streaming services but Netflix said that they moved to HTML5 Video after Microsoft announced end-of-life for Silverlight.

A few years ago, when Silverlight was no longer a reliable option for developing applications, many had migrated to HTML5. HTML5 is used with CSS3 and JavaScript altogether to develop interactive, rich web applications.

However, HTML5 and Silverlight are both different options and both have their own set of applications.

It is considered an open-source re-implementation of Silverlight. It runs on leading browsers with the help of WebAssembly and Microsoft Blazor. OpenSilver is considered the best alternative to Silverlight. Userware, a Paris-based software company has been working on it for over two years. One of their popular products, CHTML5, a free Visual Studio Extension is used to create HTML5 apps using C# and XAML.

OpenSilver is certainly not Silverlight but it offers a way of running Silverlight inside of modern browsers using Web Assembly instead of plugins. It is similar to Blazor, except that Blazor uses Razor syntax and OpenSilver keeps using XAML for its views.

It is currently being maintained and backed by HARMAN, an Adobe AIR partner and an independent subsidiary of Samsung Electronics Co. HARMAN offers a range of products and solutions for automakers, enterprises, and consumers worldwide. Adobe ended support for AIR in 2020 and ongoing support is now managed by HARMAN.

Apps developed in AIR can be deployed on Windows/macOS desktop platforms, Android, and iOS platforms. HARMAN focuses on enhancing the platform and improving the usability of AIR SDK.

AngularJS is a JavaScript-based open-source web framework from Google. It is widely used to develop the front-end part of the applications and single-page applications.

Modern web browsers stopped support for plugins and that caused technologies like Silverlight and Flash to shrink. As a result, JavaScript was there as a strong option for developers to build rich web applications. Many enterprises had migrated from Silverlight to AngularJS when this plugin-reliant community declared an end.

AngularJS’s two-way data-binding and suitability to MVVM architecture – these two features are well appreciated by developers and it’s a pretty good choice for developing rich, interactive, and responsive web applications along with the use of HTML and CSS.

It is also a front-end JavaScript library for building UIs and single-page applications. It is maintained by Facebook and the community. It enjoys a dominant position in the cross-platform development market having a large number of users that include Facebook, Netflix, Airbnb, Apple, PayPal, and many more. It is a suitable option for those who are familiar with MVC architecture.

Modernizing Silverlight applications using React is a good option as both, ReactJS and AngularJS are by far the most successful platforms backed by giant communities. React Native, an open-source mobile app framework developed by Facebook is also immensely popular for building native-like cross-platform apps.

As Silverlight becomes deprecated, there are many options to migrate your code from Silverlight. Microsoft’s UWP and WPF can be used as alternatives to Silverlight. You can recreate your Silverlight apps using WPF in .NET Core.

WPF (Windows Presentation Foundation) is a UI framework to create desktop client applications. It offers a broad set of features and it is now an open-source project on GitHub. It was targeted for the Windows platform only and it is based on XAML, eXenstible Application Markup Language. However, WPF and Windows Forms are old and Microsoft is focusing on its Universal Windows Platform instead.

Well, choosing technology always depends on your requirements and timeline. You can choose a platform/language/technology that suits all your parameters. Modernization is a continuous process as one becomes old, the door for new opens.

Now we have seen alternatives, let’s learn what causes Silverlight to end.

What Causes Silverlight End Of Life: Here’s Everything You Need To Know

Silverlight was used to provide video streaming for the NBC coverage of the 2008 Summer Olympics in Beijing, the 2010 Winter Olympics in Vancouver, and the 2008 conventions for both major United States political parties.

It was used in Amazon and Netflix for their instant video streaming services.

It was a great technology and quickly became popular but there were several issues. First, at that time, JavaScript frameworks were taking their baby steps. Browsers relied on plugin environments such as Flash and Silverlight to deliver media and graphic-rich applications.

Chrome, sighting performance and security issues, ended plugin support. Following that, major browsers had discontinued plugin support. Microsoft released 5 versions of Silverlight over a period of time. Silverlight was built on WPF-based technology and is also known with its codename, WPF/E.

The rising mobile era and no support for browser plugins were the reasons why Microsoft ended Silverlight. The web was challenged to find something dynamic and powerful that works with a mobile environment also. This made Silverlight shut its operations and stopped development after the last major version on May 8, 2012.

There is little chance that you use Silverlight and you want to migrate your code to the modernized web environment. A majority of the web is now using the JavaScript ecosystem to build rich applications for web and mobile. Microsoft is capitalizing on WebAssembly and OpenSilver to leverage XAML for web application development.

If you are a .NET user and familiar with Microsoft products for the frontend, OpenSilver is something you can try. And if you are a JavaScript fan like the rest of the world, you can continue building amazing apps using popular frameworks and libraries.