There was a time when data exchange between applications was carried out using file transfers.

File transfers have taken a back seat and data exchange has changed to the point where message-based communication and request-response between applications are a part of a routine.

Cloud infrastructures and advanced web development standards have played important role in the new designs of data exchange that have made data exchange easier and faster.

In this article on SOAP vs REST, we will cover

Let’s start with the basic concepts and then we will see the difference between SOAP and REST.

What Is Web Service?

A web service is a collection of open protocols and standards that facilitate communication between systems or applications over the network. Software applications in various programming languages running on different platforms use web services to exchange data and communicate over computer networks.

What Is An API?

API is the acronym for Application Programming Interface. It allows two services and products to interact with each other without any user intervention. Developers can simply use this interface to enable communication and don’t need to know how the APIs are implemented.

Most web applications rely on this for communication and would not be possible to function without APIs. In today’s time, API adheres to REST principles and JSON format and is built for HTTP.

What Is SOAP API?

It is a messaging protocol specification that sends a message using HTTP and SMTP. It uses XML for its message format in message transmission.

As SOAP is a protocol, it has certain built-in rules and architecture that increase its complexity and make it verbose. While SOAP is less suitable for the general web service scenario, it is an ideal choice for enterprise applications.

The reason behind this is ACID compliance. SOAP standards offer built-in compliance that includes Atomicity, Consistency, Isolation, and Durability that ensure a higher level of safety and reliability. SOAP is favored by banks, large financial organizations, and organizations handling sensitive transactions.

What Is REST API?

REST is a software architectural style that was created to guide the design and development of World Wide Web architecture. REST is truly a web service and facilitates client-server communications and architectures.

Thanks to HTTP protocols, REST offers simplicity, visibility, scalability, portability, and reliability. This is all achieved through REST principles that must be followed for the services to be called RESTful.

RESTful API uses HTTP methods to access resources through URLs (a reference to a web resource) and JSON or XML for transmission of data. JSON is a widely used and most preferred data format as it is browser compatible and easy to work with.

REST is focused on the web, which means, REST architecture is specifically designed for the web with goals such as scalability of web interactions, independent deployments of components, uniform interfaces, and encapsulation.

REST is known for its faster execution and performance along with cacheability, use of layered architecture, and statelessness.

Now we have seen the basic introduction, let’s talk about the difference between SOAP vs REST API in detail. 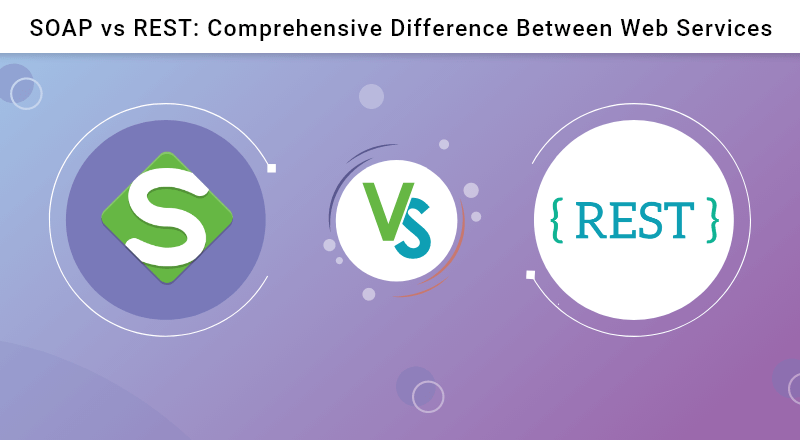 SOAP is a protocol.

REST is an architectural style.

This is the main difference between SOAP and REST.

On a granular level, REST and SOAP both are different paradigms. So, we can’t have a direct comparison of SOAP and REST. But, there are certain points based on which we can decide when to choose what.

What Are The Advantages Of SOAP Over REST?

Advantages Of REST Over SOAP:

SOAP vs REST: Explained In Detail

SOAP is a protocol and more function-driven. A typical SOAP structure is made up of envelope, header, and body elements with WSDL (Web Services Description Language). SOAP is a protocol specification that defines messaging framework.

It is evolved as a successor of XML-RPC.

REST played a crucial role in the design and development of the World Wide Web. REST is an architectural style that is more data-driven and designed for client-server architecture. It contains a set of guidelines for interactions between web components.

As we have seen in the table, SOAP is a good choice as it supports WS security. It is more descriptive and comprehensive than SSL. It ensures security for SOAP-based messages through principles of confidentiality, integrity, and authentication. Also, built-in ACID compliance makes it more secure.

Both REST and SOAP offer end-to-end encryption using HTTPS and SSL. REST works with HTTP requests and responses and relies on a stateless communication protocol. REST is less secure than SOAP.

REST makes use of URLs to access resources. A URL (Uniform Resource Locator) is a reference to a web source that specifies its location. SOAP transfers structured information in XML data format containing envelope, header, and body. This envelope-style payload transport causes extra overhead and results in slower performance and more bandwidth.

On the other side, REST is lightweight, scalable, and not restricted to only XML data format. It is primarily used for web services and is faster to implement and execute. It consumes less bandwidth compared to SOAP.

Cacheable data can be reused by the browser without making any calls or initiating another request to the server. This saves time, improves performance and resources. When using SOAP, responses are not cached at the HTTP level. In REST, cacheability is considered an important principle while implementing RESTful services.

SOAP supports only XML whereas, in REST, it supports JSON, XML, HTML, and even plain text. Most new and public APIs are built using REST and JSON as both are lightweight and easier to implement.

It consumes less bandwidth and is easier to understand and write. JSON + REST, this combination is browser-friendly and that’s the reason it became defacto standard for the majority of APIs and web services.

In order to be classified as RESTful API, a system must follow six guiding constraints defined by REST. These six principles are:

On the other side, SOAP is highly extensible and can be used with other protocols and technologies. It relies heavily on XML and WSDL for data transmission.

Here are the examples of each to help you better understand the differences.

Here, we are trying to fetch details of the book based on the book name.

Which API Should You Choose And When?

When we are talking about Soap vs REST API, this question arises.

REST APIs are lightweight, easy to implement, and easy to understand. The majority of developers prefer REST API because of its simplicity, visibility, portability, performance, and scalability.

SOAP is more suitable in certain scenarios when you need to work with legacy systems, need to maintain a state of information, or build enterprise-level apps with power-packed security. You can use SOAP when security is your concern as it offers more secure transactions and ACID compliance – Atomicity, Consistency, Isolation, and Durability.

Choice of API usually depends on the type of project or requirement. Whatever you choose, if you follow best practices, it will save your time and increase speed and performance.

Soap vs Rest Web Services: Choose Based On Preference And Use Case

We have listed down the differences between SOAP and REST and as you can see, each is different. REST is designed for internet-scale client-server applications and has a layer of abstraction to facilitate large-scale data transmission.

REST can make use of SOAP protocol but SOAP can’t use REST as REST is an architectural style.

The choice is quite easy because use cases of both are different and developers can identify when to use what based on the requirements.