“Software is a great combination between artistry and engineering.” -Bill Gates

It isn’t anyone of these, it is all of these.

Software application development is a seamless fusion of these multiple attributes and is an effective output of them working synchronously with each other.

Most times, the common perception of software is programming and coding. But there is much more to it than mere coding. Though we all know about all the different stages of the SDLC, it is important to ascertain the importance of each, the involvement of various skills in each step and the output of those.

Important and Known Phases of the Software Development Life Cycle

These are the standard phases of the SDLC that have been constant throughout the history of software application development. These are known and followed by all.

But there are many other aspects that are equally important and play a crucial role in making a software application successful and effective. And, these pointers are such that need much more than mere coding skills. They need a variety of soft and hard skills to build, design and deploy a software application. 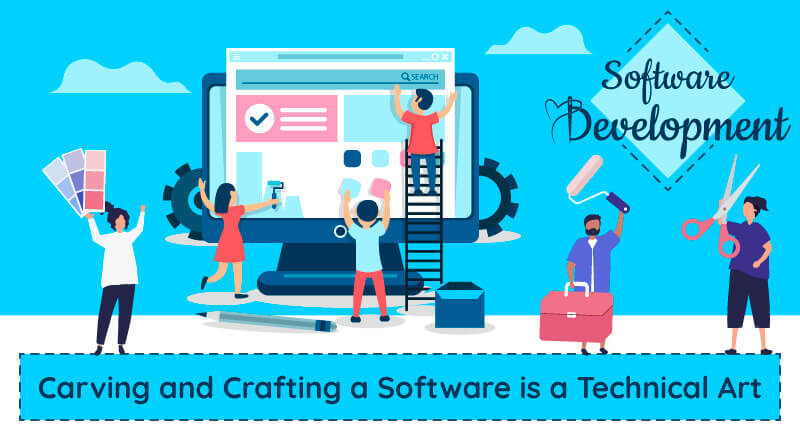 As a fundamental guideline, it is vital to understand and analyze the basic purpose of building a software application. This comes much before the first official phase of requirements gathering. One should be aware of answers to basic queries like ‘is it a new software or a rebuild?’, ‘who are the actual users of the system?’, ‘Why are we going in for building this software and not buying a readymade one?’ and many more.

Crafting a software architecture well ahead of time is a wise decision since it shows you the approximate layout of the entire software application. This gives us a fair idea of how the systems and subsystems are going to interact with each other. It also focuses on the different mediums of showcasing a sample software like PoC, prototyping, etc. It talks about interaction within teams and hence needs social skills to establish a strong connection between stakeholders. All these skills and activities are way beyond coding and need a specified skill set to accomplish goals.

Though this may look like a characteristic which is bound to be there, software developers and architects often tend to neglect it or take it for granted. But, for the success of this, it is definite to showcase a positive attitude, not only by a specific user but by the whole team. And, the other emphatic area is earning the user’s trust in the application. If that is not achieved, come what may, however good your application is, it isn’t going to be used practically.

A very common norm that software teams adopt is involving testing and execution methods at a very later stage of the project. The usual feeling is to let it arrive once the coding is almost done, but that is a grave mistake being done. Any kind of testing – unit, performance, functional, automated, etc. and any project method – Agile, Waterfall, DevOps, etc. must be considered for implementation right from the first phase of the project. That is when the actual purpose of these very important phases will be served to the best.

Yet again, the security concerns – app security, cybersecurity, network security, etc. are most often taken into consideration as the project starts coming to an end. Absolutely a wrong concept! If done this way, there will be many loopholes that will prop up late in the project and affect the stability and deadlines. These security arrangements need to be in line with the project phases and should be interwoven into the application.

The building, designing, developing and implementing software calls for multi-faceted skill sets. Each phase and functioning of the project require a different level of experience and expertise to accomplish great results.

Doesn’t this clearly indicate that software development isn’t merely a coding process, there is much more involved in it?

At the same time, it is even more vital not to lessen the importance of the key coding areas that form the crux of the entire software project. All other entities are important, but the coding periphery is the pulse of the project.

Coding forms the heart pulse of the entire software development process. But the project cannot be successful without its other organs and hence, they too, are crucial to any software application. The best is to work out a strategic, integrated and detailed project plan that can leverage the best out of each of these attributes. Crafting classy software applications is a blend of creativity, art, science, architecture, maths and more.

Partnering with a proficient software development partner would be the best option to get optimum results with minimal burden. Software application development is a practice where art, science, and craft meet.