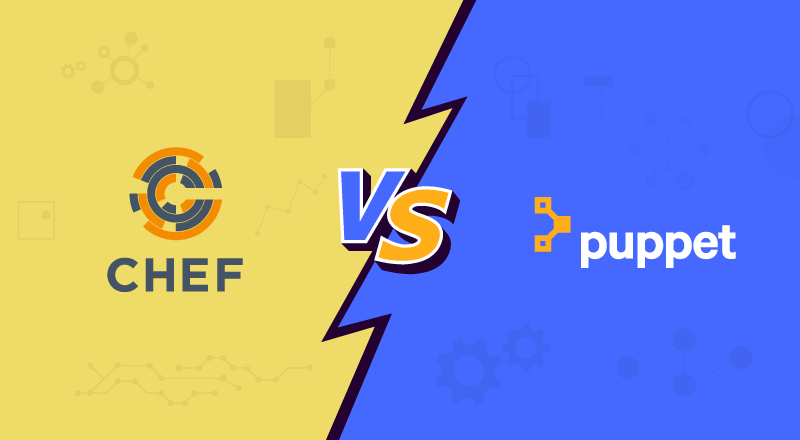 Prior to DevOps – the latest philosophy to project execution methodology, The development and operations teams were working for a single project in their own ways and means. DevOps brought them together and thereby came the need for integrated configuration management and continuous integration.

Configuration management tools are the call for today and the need for tomorrow. Two of the most popular, in-demand configuration management tools are Puppet and Chef. A lot has been said and written about it. There is much in common, something different to each other. Both are good, both are in vogue and both have their own individualistic nature.

Both Puppet and Chef are best-in-class configuration management tools that are leveraged to design, deploy, configure and manage servers, infrastructure, etc. They are both, capable of automating multi-tier applications and competent enough to manage complicated apps.

Before we investigate both individually and further compare them, let us have a glimpse at the foundation stone of both – configuration management.

What Is Configuration Management?

On a basic level, configuration management offers an abstraction layer between the infrastructure’s basic formation and its chosen state by emphasizing important objectives rather than the monotonous responsibilities needed to attain them.

The major objective of configuration managers is to utilize comprehensive languages to understand and grasp all operations’ necessities so that there is even knowledge sharing within different projects. For any newcomer in the team, it is ideal to have detailed know-how of the standardized tool rather than explaining to the team member about all the intricate details.

Puppet And Chef – An Introduction

“Unlike error-prone procedural scripts, which require you to define every step for configuring systems, Puppet Enterprise lets you simply define the desired state of your infrastructure and applications. Puppet continuously and automatically enforces that state, so you can spend more time innovating and less time-fighting fires.” – Puppet

Puppet is used by thousands of companies worldwide some of them being Google, Red Hat, Siemens, Stanford, Harvard law school, and many more. It has a popular user-based contributing to its source code. It has been in vogue since 2005 and has come up with many versions with continuous improvement. It has been deployed in large infrastructures and possesses large user-driven documentation that suffices all queries. Puppet is based on Ruby and utilizes a tailor-made Domain Scripting Language nearer to JSON for working within it. It can execute on any platform that supports Ruby.

The Core Components That Comprise Puppet Are As Follows:

Pros And Cons of Puppet

When To Use Puppet?

“Chef is the leader in Continuous Automation software, an innovator in application automation and one of the founders of the DevOps movement. Chef works with more than a thousand of the most innovative companies around the world to deliver their vision of digital transformation, providing the practices and platform to deliver software at speed.” – Chef

The Core Components That Comprise Chef Are As Follows:

Pros And Cons Of Chef

When To Use Chef?

Puppet And Chef – The Similarities

Since both looks at the same fundamental objective of configuration management, there are certain attributes that are found to be existing in both, here are they:

Puppet vs Chef: A Quick Comparison To Know The Differences

As The Comparison Comes To An End

As we read through both the options, we understand the importance of both. Both are competitive, good, popular, and are in line with the latest DevOps-related needs. Both are upgrading themselves to fit in the latest groove. Both have matured immensely and hence which one to choose is entirely up to the organization’s basic needs and workflows.

What is more important is to have a well-established and experienced configuration management partner who can help in the entire process, right from choosing the technology, implementing it and reaping its benefits.

What are your thoughts? let us know via comments below.

Connect with our DevOps Consulting Team to transform your software development.