When we talk about Dart, the first thing that comes to mind is its use by Flutter. Yes, Dart was released in 2013 but it has started gaining popularity after its adoption by Flutter. Flutter is a cross-platform UI toolkit from Google for developing apps for platforms including iOS, Android, Windows, macOS, Linux, and web using a single codebase.

Dart, a programming language developed by Google has released its recent version 2.10 with new tools and improved experience.

If you are unfamiliar with Dart, let’s first talk about Dart.

A Quick Introduction To Dart:

Dart is a client-optimized programming language developed by Google and it is used to build apps for mobile, web, servers, and desktops. It has a C-style syntax and Dart code can be compiled to native code or JavaScript.

Now, what is the client-optimized programming language?

Generally, applications have client-side code and server-side code. Both these development sides need to be optimized for better performance. Dart is simply focused on client-side optimization rather than adding more features or expanding support for server-side functionalities.

On October 1st, the Dart community released a new version of Dart, 2.10. 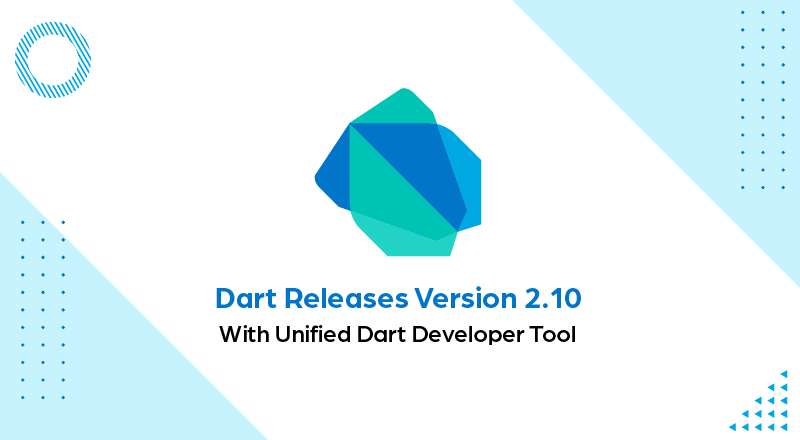 One of the major things to notice in Dart version 2.10 is the unified Dart developer tool.

Dart 2.10 developer tool is similar to the flutter tool. It is a command-line tool that helps developers to perform common tasks such as the creation of projects & packages, running, compiling, and testing project, and also formatting & analyzing code.

As Dart is the base language in Flutter SDK, it supports core developer tasks through such tools. Flutter’s recent 1.22 SDK supports this new dart tool for running Dart commands. Dart had such dartfmt and dartanalyzer tools in the previous version. But, with this unified tool, Dart is planning to gradually deprecate these smaller tools and focused on adding more to this new dart tool.

The other key update in Dart 2.10 is null safety. Let’s understand in detail.

The Dart community is looking forward to supporting null safety in their upcoming stable release. Null safety is still in tech preview.

Null safety ensures that no objects and types in your code will have a void or null values. Many modern programming languages like Kotlin, Swift, Rust, and many others have their own approaches to handle null safety. Null safety also makes sure the best code practices and allows developers to check for null safety to avoid any runtime failure.

According to its official announcement,

Null safety is a fundamental change to the Dart typing system. It aims to change variable declaration practice as Dart has decided to make variable non-nullable by default. Without null safety, the Dart program throw exception that leads to the erroneous environment and crashes.

This is why null safety of statically-typed programming language like Dart is important.

Also, developers at Dart insist on using Dart’s migration tool that allows developers to review nullable properties suggested by the tool and also can add nullability hints on their own. Dart is planning to introduce sound null safety that enables compiler optimization and full runtime verification. Sound null safety ensures that values can’t be null unless developers allow it to be null. They have also suggested migrating carefully and incrementally to avoid any difficulties.

We have already discussed Flutter 1.22 in our recent blog. Flutter uses Dart to leverage Dart’s multiplatform, modern, and native performance capabilities. Dart is popular for smoother animations and transitions that run at 60fps. It can also perform garbage collection and also supports abstract classes, object allocation, and type interface.

Google engineers use Dart to create many apps for Google. One of the popular examples of Dart is Google Ads – web or mobile app. When you build an app with Flutter, you need to write code in Dart and developers are loving it due to its easy syntax and powerful features. Those who are using Flutter in their production environments are ultimately using Dart including Tencent, Alibaba Group, Groupon, eBay, and many more.

Dart and Flutter together make a very suitable combination for startups and small teams that want to develop an app for multiple platforms within limited resources. Dart allows developers to build a native experience that includes quick startup of the app, faster performance, and visually-appealing UIs.

Have you tried Flutter or Dart?