Google and Apple both have rolled out updates and the tech industry is gauging its impact on devices, development, and performance. Android 11 and iOS 14 are the latest updates in the mobile world and gradually reaching smartphones and frameworks in the near future.

Since its first release, over two million developers have used Flutter in the past sixteen months, according to its official blog on Medium.

Flutter is a Software Development Kit (SDK) created by Google and the community. It is open-source and enables developers to build visually-appealing, native-like apps for mobile and web using a single codebase. It is one of the popular cross-platform development tools and quickly gained momentum after its first release in 2018.

The community behind Flutter is making a continuous enhancement to make it one of the mature and stable frameworks. The recent release of Flutter equips with performance improvements, bug fixes, and the latest features to support Android 11 and iOS 14. 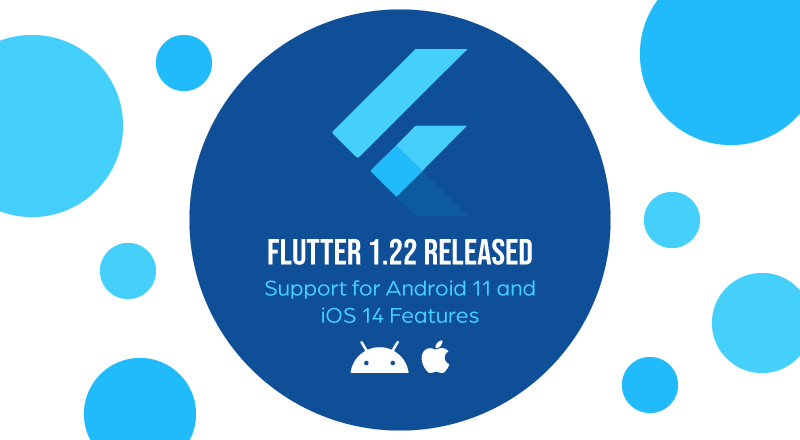 Quick Highlights Of Flutter 1.22: Everything You Need To Know About Flutter’s Recent Release

Flutter 1.22 was unveiled on 1st October 2020. A major focus of Flutter 1.22 is to ensure Flutter’s compatibility with Android 11 and iOS 14 features and solving some performance issues. Let’s see what the key updates for each platform are.

Android 11 update offers a great user experience along with a focus on increasing developers’ productivity with more controls for device, media, and privacy. One more thing to notice when we talk about Android is – with this release of Flutter, the older v1 APIs will be deprecated. As more than 80% of Android Plugins use the new Android APIs released with Flutter version 1.12, v1 plugin APIs will be no longer used.

Flutter 1.22 comes with a whole new “universe” of button widgets and themes. This Flutter update also fixes the accessibility and keyboards issues for Android Views. Furthermore, the state restoration feature is one of the most-requested features of Flutter 1.22. Flutter now supports state restoration on Android which means enhanced user experience while making the best use of devices’ resources. State restoration, in layman’s term, is a feature that allows users to return to access the same state of the app in which they left it.

Some issues related to deployment, rendering, and crashes were also fixed in this latest update. Flutter 1.22 is focused on leveraging the best of iOS 14 and Android 11. There are some known issues when developing an app for iOS 14 and that has been fixed in Flutter 1.22. Flutter 1.22 makes it hassle-free to develop, test, and deploy iOS apps. This update also supports app clips – a new iOS 14 feature which enables quick, no-install executions of lightweight versions of apps (under 10MB). iOS 14, the current major release of Apple’s operating system packages features that make app development faster, easier, and modern with new tools for Machine Learning, AR, and Artificial Intelligence.

Also, this release includes the closing of 3204 issues and merged 1944 PRs(mentioned in Flutter’s Medium blog), improving the developer experience and productivity.

More and more developers are using flutter owing to its benefits of performance and speed. Flutter is used by world-popular companies such as:

One of the reasons Flutter is a preferred choice of developers for cross platform app development is Dart language. Flutter uses Dart language developed by Google. Dart’s many advanced features such as Ahead of Time Compilation (AOT), easy syntax, faster compiled to native code, and multiplatform use make it one of the favorable programming languages to build cross-platform apps.

Flutter’s great performance, speed, declarative syntax, and native-like experience are the reasons why developers loved it. It is chosen by the best brands with a significantly huge user base. It is known for attractive UIs, widgets, and engaging user experience development for Android and iOS platforms using a single codebase.  Flutter App Development skills are also considered the most in-demand skills and Flutter has also remained the most loved frameworks after .NET Core and Torch in Most Loved, Dreaded, and Wanted Other Frameworks, Libraries, and Tools according to Stack Overflow Developer Survey 2020.

Good Read: Google Pay Re-Written In Flutter: Everything You Need To Know

We hope Flutter 1.22 significantly contributes to increasing Flutter’s popularity. With the support for iOS 14 and Android 11, Flutter’s recent release 1.22 is all set to impress developers worldwide!