This was the day when Flutter entered the market. On December 4th, 2018 Flutter’s first stable version was released. Since then, Flutter has been continuously growing, and on March 4th, 2021 Flutter 2.0 is announced by the community in Flutter engage event organized by Google.

In this article, we will be talking about Flutter 2 and what’s new in Flutter’s latest version. 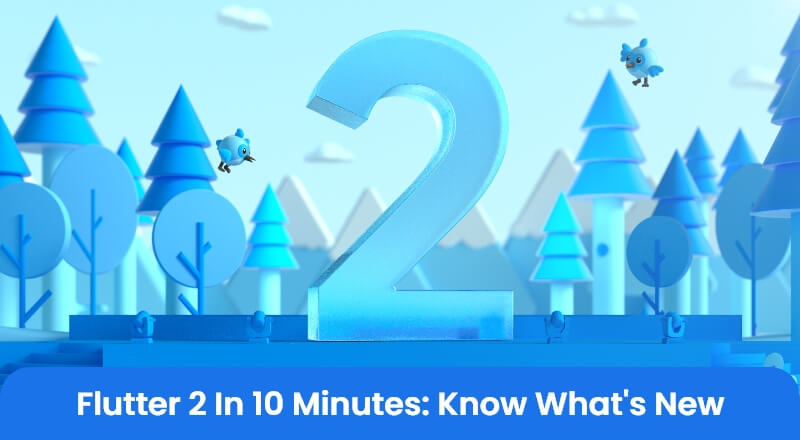 Flutter 2 Is Out: Here Is Everything You Need To Know

Flutter, Google’s UI toolkit offers best of the both worlds – cross-platform development support and hardware-accelerated, native-like UI elements, making it one of the preferred choices for cross-platform app development.

Flutter For Web: From Beta To Stable Release

With CanvasKit-based renderer, web-specific features, and support for all modern web browsers, Flutter for the web is all set to deliver beautiful experiences on the modern web.

Flutter For Desktop: Available In Beta

Flutter’s support for desktop applications is the next big update after Flutter’s stable release for the web.

Flutter community has done many improvements and performance optimization to ensure the best desktop experience. This includes:

Flutter is the default choice for future desktop and mobile apps created by Canonical. Canonical is a UK-based computer software company that publishes Ubuntu.

Microsoft has also expanded its support for Flutter Engine that supports the emerging class of foldable Android devices.

Flutter can be embedded in cars, TVs, and smart home appliances to provide a connected and enhanced experience regardless of the device.

Flutter 2 comes with the beta release of Google Mobile Ads for Flutter, a new SDK that supports AdMob and AdManager to offer a variety of ad formats. It is a new plugin that provides native ads, inline banners along with existing overlay formats.

It prevents null error crashes by checking for null errors during development time, saving the app from crashes in production.

Flutter 2 uses Dart 2.12. Dart’s latest version is released recently with sound null safety and FFI. Dart was trying to add null safety since the introduction of the sound type system in Dart 2.0. Dart 2.12 offers null safety as an opt-in feature, which simply means, you can use Dart 2.12 without being forced to use null safety. They also help migrate your code to null safety in an efficient manner.

This makes dart programs smaller and faster. Dart ensures your non-nullable variables are never null, hence, making a safe environment for the developers to prevent the potential crash that null can trigger.

Flutter’s cross-platform support is outstanding. It supports three platforms for production apps (Android, iOS, and the web) and three in beta (Windows, macOS, and Linux). Flutter Folio, a simple example app – scrapbooking app that showcases how Flutter apps run on multiple platforms from a single code base.

Flutter Folio is self-adaptive as it adapts well to the platform it’s running upon. You can check the Flutter Folio app that is built in collaboration with gskinner, an award-winning design team based in Canada.

Flutter 2 comes with two new widgets, AutoCompleteCore and ScaffoldMessenger. AutoCompleteCore provides the functionality required to get auto-complete in your Flutter app. It is one of the most-requested features for Flutter.

The ScaffoldMessenger was created to deal with a number of SnackBar-related issues.

With this release, Flutter tries to fix many existing iOS-related issues. A number of issues were solved and performance improvements were done to improve the quality of support for iOS. This Flutter version comes with 178 iOS-related PRs merged. Flutter community is trying to bring new features and improvements for iOS and Flutter.

Here’s the list of performance improvements and added features in Flutter 2:

Customers from all over the world are using Flutter. This release of Flutter 2 will surely increase developer productivity and experience and broadening the horizon for Flutter. With many important features and enhancements, Flutter 2 is set to please the developer community and Flutter app developers across the globe. Flutter app development will bound to increase its popularity among app developers to build intuitive, modern, and feature-rich applications for Android and iOS.

Flutter is used by well-known companies such as

and most importantly, Google itself.

Over a thousand engineers at Google are using Dart and Flutter to build apps. Also, Google Pay has chosen Flutter for its mobile app and they achieved quality and productivity.

Google Pay team removed over half a million lines of code and unified the codebase for Android and iOS platforms.

Future Is Bright For Flutter: What’s Next?

Flutter is the fastest-growing and most-vibrant developer community across the world. There are already over 150,000 Flutter apps out there on the Play Store. Every app gets a free update to Flutter 2 without rewrite and even target multiple platforms.

Flutter is a fast, modern, and rich UI library from Google and tops the chart of best cross-platform development platform with an ability to deliver great experiences that showcase your brand in a modern way.

Have you tried Flutter?