Eric Seidel, (Engineer Director for Flutter at Google) opened his talk at the 2015 Dart Developer Summit by saying that he was there to talk about ‘Sky’, which was an experimental project focused on the use of “Dart on mobile.”

The first version of Flutter was known as “Sky.”

85% of developers agreed that Flutter made their app more beautiful than before.

Flutter was first released in May 2017.

Flutter 3 is jam-packed with exciting features and updates, and new framework capabilities. 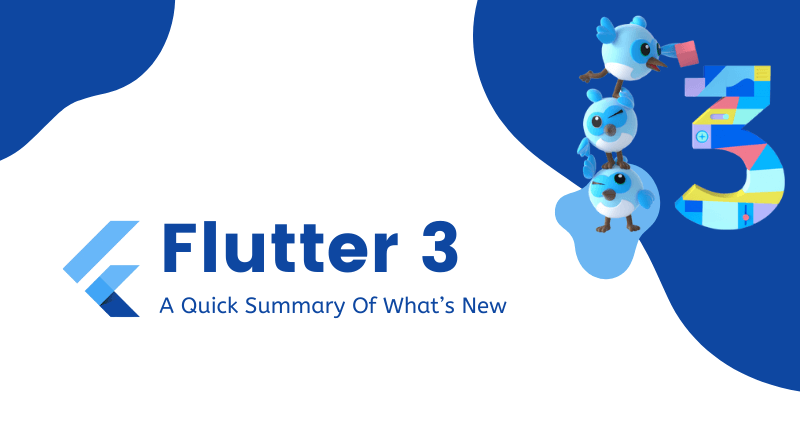 Let’s deep dive into these highlights and see how Flutter 3 can be used to develop multi-platform native applications.

In previous releases of Flutter 2, the Flutter community announced support for web and Windows platforms along with iOS and Android.

Now, Flutter 3 adds stable support for macOS and Linux apps. You can now develop your application on any or all of these platforms using a single codebase.

Flutter, with this latest release, supports macOS with Universal Binary, a format for executable files that run natively on both – Apple silicon and Intel-based Mac computers.

For the Linux platform, Canonical and Google have collaborated to offer the best and most highly-integrated setup for development.

Flutter 3 allows developers to leverage cross-platform benefits and share as much UI and logic as possible between these platforms.

It transforms the entire application development experience and lets developers take maximum benefits of underlying operating systems and platforms. This means, faster time-to-market of an app, increased developer productivity, and presence on multiple platforms. Flutter for startups is a good choice because Flutter can meet the needs of a digital presence for startups. Startups inevitably need a great user experience, cross-platform support, and a cost-effective development model that helps them attract customers and raise awareness about products and services.

Material You is Google’s new unified design language. Google explains it as a “radical new way to think about design.” It goes beyond traditional paradigms and is all about personalization.

Developer benchmarking studies by SlashData show that 62% of Flutter developers use Firebase in their apps.

Firebase supports Flutter. In this latest update, Firebase expanded its support and integrated Flutter as a first-class integration. Developers will see better documentation, tooling, and new widgets like FlutterFire UI which offers reusable UI for auth and profile screens.

Flutter is powered by Dart, a multiplatform, high-productivity, and portable language created by Google.

Dart is a continuously evolving and rapidly-growing language created by Google. It has simplified user interface creation for web and mobile platforms.

Firebase Crashlytics is a real-time, lightweight crash reporter that helps you track fatal errors. Using Crashlytics, you can collect analytics and details about crashes and errors.

It is Firebase’s popular real-time crash reporting service to identify, prioritize, and fix issues. With Flutter 3, you can avail this by simply using Flutter Crashlytics Plugin and It offers many features that help developers ensure the stability of the app.

Some improvements have been made in this latest version that includes:

Apart from that, many pull requests are merged, giving Flutter a major performance boost compared to the previous version.

Flutter 3 gives the new lifecycle API for Flutter web apps to let developers control the bootstrap process of the Flutter app. It applies to many scenarios such as

Accessibility On All Desktop Platforms:

As we have said earlier that Flutter is now used to develop apps for six different platforms, it supports accessibility services such as screen-readers, inverted colors, accessible navigation, and so on.

As we know that older versions of Windows(Windows 7, Windows 8, and 8.1) are no longer supported by Microsoft and with Flutter 3, the community also recommended Windows version 10 for development and Flutter now offers limited testing on these older versions.

With this release, Flutter now supports variable refresh rates on iOS devices with ProMotion displays. Flutter apps are now able to render at a 120 Hz refresh rate on iPhone 13 and iPad Pro devices. This was previously limited to 60 Hz. This gives a smoother experience during fast animations.

Flutter 3 has added new options to the Flutter build ipa command that simplify the release of an app.

Flutter continues to rise in popularity. It is powered by Google and an open-source community and is loved by developers worldwide.

Flutter 3 combines the experience of the web, mobile, and desktop and allows developers to leverage single code base multiplatform app development.

Flutter is making headway toward becoming a most-used and widely-adopted cross-platform framework.

We can’t wait to see what the future holds for this amazing open-source toolkit, Flutter.