The question “Is my idea good for the customers?” keeps every Appreneurs in the middle of the way.

Because developing a new mobile app by solely considering your idea can be a disaster! It is necessary to get feedback at an early stage to know the willingness to purchase the product.

However, building a Minimum Viable Product can be a savior!

Minimum Viable Product: Why Businesses Should Adopt It?

The MVP is needed to validate the idea; it confirms the user’s interest in your product. The purpose of the MVP is to test the hypothesis by minimizing the errors!

On a lighter note, MVP is all about balancing what your business is offering to the users and what your users actually need.

Those That Adopt Minimum Viable Product Can:

It is always preferable to start with the basic model and limited features. This approach is even followed by big companies.

To know more about MVP, read “How building MVP can lead the road to a successful business”

However, most of the business even fails in developing the best MVP!

If Businesses Have Their Idea Validated, Then What Makes It Fail?

It is because they are unable to:

However, for any MVP to succeed in the competitive market, it is always necessary to have thorough research on customer’s needs and must have a unique selling point.

Moreover, they must use evolving technology to improve their service, efficiency, and productivity.

Evolving Technology: One Of The Key Factors For MVP Success

Evolving technology streamlines automates and scale your business processes; helping you to stay competitive. Most of them require less coding and less learning curve which saves much of the app development time.

So, are you looking for a technology that is evolving and has all the features necessary to build successful MVP?

Actually, there’re many technologies that fulfill the criteria of successful MVP development, but Flutter is one that stands tall. Alibaba, Google Ads, Hamilton Music, Tencent, JD Finance, and many more are already using Flutter to deliver superior-quality apps on iOS and Android. 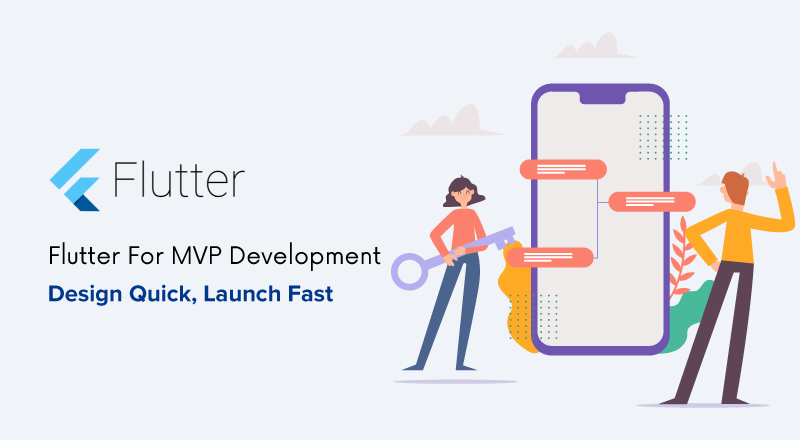 Quick Overview: What Is Flutter?

Flutter is a cross-platform development framework developed by Google to build high-performing native apps in iOS and Android both from a single codebase.

Here’s an introductory video by Google to take a look into what its latest offering is about.

To know more about How Flutter is helpful to the Appreneurs, read this article to get full-fledged information.

Although it is launched in December 2018, it is being adopted by many organizations due to the enhanced features, bug fixes, widgets and much more.

Flutter Is An Open Source Which Is Great For MVP Development

It is because of businesses,

Flutter is being used by a developer which proves that there is something unique in it that hasn’t been around before.

Let’s see the key benefits of developing MVP and How Flutter helps in achieving those.

Now cost is no longer trouble for developing apps on both the platforms.

It saves much of the cost because,

Moreover, it has access to the native app features, which helps to build a pixel-perfect app. Whether you are a small business or a large enterprise, Flutter cross-platform app development support provides access to the mobile world with minimal time and money.

With flutter’s hot reload feature, developers can see the changes done to the code in the app spontaneously. When the changes are made in the application, it is immediately visible to the developers which make the process easy and less time-consuming.

Developers, Designers, and Testers can work in good collaboration when they want to change the effect immediately and want enhancement in the app’s look. With Hot reload, developers usually take seconds/minutes to add features, fix bugs and experiment faster as they don’t need to code entire newly built.

The use of a rich set of UI features, the latest technology, and interactive designs always attracts the customers.

However, Flutter takes ‘Everything is a Widget approach’. It supports Material Design and Cupertino which is a collection of visual, behavioral and motion-rich widgets that make apps look beautiful on both iOS and Android device respectively.

What makes Flutter different is, it not only supports available widgets but also enables us to generate customized Flutter widgets as per your need. Moreover, Flutter supports 2D GPU-accelerated APIs which makes app animation look smooth and attractive and helps to build rich UI and UX.

Its wide range of themes enables developers to create themes separately for Android and iOS device which renders the best UI on the specific device. This rich set of UI features helps in developing more user-friendly, easy-to-use and engaging apps.

With Minimum Resources, You Can Develop MVP: How Flutter Builds Apps With Faster Go-To-Market And Record Time?

Flutter is integrated with Firebase!

Well, Firebase is a Google’s Backend-as-a-Service, with no server-side programming which results in quicker and easier development.

Due to such integrated tools, the organization doesn’t require resources to build backend infrastructure; hence it becomes easy to build a Serverless app. With such features, the app can be released faster in less time.

Creating the MVP with the help of Firebase enables to run a successful business as Google is constantly improving Firebase; so that every feature corresponds to the latest tech trends.

Additional Benefits: How Flutter Is A Game-Changer For MVP Development?

On A Final Note: Is Flutter The Right Choice For MVP?

Each software product is unique and so is MVP. However, the Flutter community is developed by Google and is so vast that it can meet the need of any product, no matter what it is.

So, Flutter is the best bet:

Flutter offers a great opportunity to build beautiful, high-performance and outstanding mobile apps which fits your custom needs and requirement. Hence, it is surely the best choice.