Someone said it right,

A user interface is like a joke. If you have to explain it, it’s not that good.

What we present to the users matters more than the internal code structure. The front-end of any product, website, or app is the face of the company, and it must deliver a lasting impact on the users.

Front-end development is extremely versatile and full of libraries, frameworks, packages, and tools. Thanks to the concepts like microservice architecture and agile development approach, building a complex app faster seems easier than the previous time to deliver beyond expectations.

Microservice architecture – a popular variant of the Service-Oriented Architecture (SOA) for back-end is now hitting the headlines with another dimension, i.e., Micro front-ends.

In this post, we will explore what micro front-ends are and how developers around the world favor it, along with its market presence and limitations. 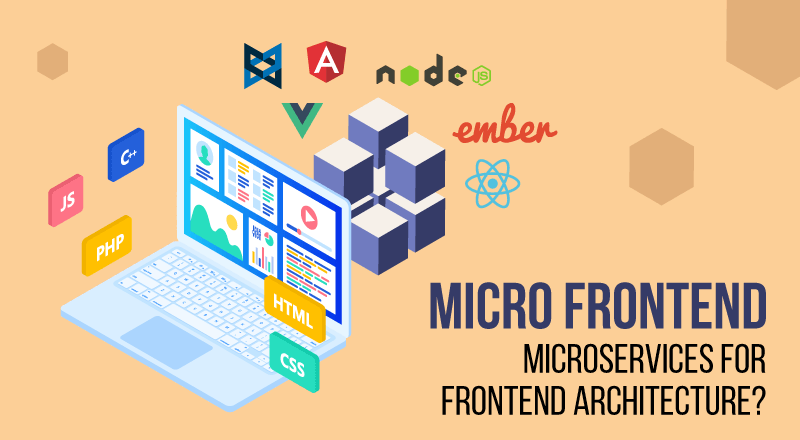 Microservices Is Not Only For Back-end: Introduction To Micro Frontends

Microservice is setting trends and making it easier for organizations to build large, enterprise-grade apps faster and in a more manageable way.

For those who are unaware of microservices, we have written a bunch of useful articles to understand Microservices in detail.

What Is Microservices? Explained In 200 Words

Microservice Architecture – Is It Right for Your Enterprise Software Development?

Microservices is a software development pattern or style that allows developers to split up the entire development architecture into independent, small, and functional services (units).

It is closely associated with the back-end part and very helpful architecture for modern apps and cross-functional teams. It also allows developers to choose independent and most suitable technologies for tasks without worrying about any dependencies and deployments.

It is one such revolutionary concept that has redefined the development of enterprise apps.

Now, this same principle – splitting up whole architecture into smaller, functional parts is applicable to the front-end development, and it is known as the micro front-end.

The micro front end is an architectural pattern for front-ends, allowing breaking of the whole front-end into independently, deliverable, deployable, smaller front-end apps. Then, these apps are composed together to build the desired front-end of an application.

It is very similar to Microservices and allows enterprises to manage cross-team collaborations. It is considered one of the useful techniques to reduce the complexity of large and modern web development.

One significant difference here is Microservices focuses on the de-coupling of back-end services while in micro-front-end, more importance is given to aggregation of the micro applications.

A front-end is taking the front seat.

Over time, the role of the front-end has changed. The front-end is given the highest importance to attract users with design, architecture, speed, and execution – effectively and efficiently. While the back-end of any app got a makeover with architectural concepts like microservices, the front-end is still following the same architecture – monolithic where everything is unified, composed all in one piece.

What’s The Problem With Monolithic Style in Front-end?

Here are some points worth your attention.

There is one answer to all these problems, the micro front-end.

Each micro front end is a smaller chunk of code having a specific purpose to accomplish. This makes it easier for the developers to build, test, and deploy independently.

These decoupled codebases can also result in inappropriate coupling and complexities between components in some situations. It also mandates teams to look upon data and event flows between different parts of the application.

It allows flexibility to choose and manage the individual part of the application. If one or several parts of the applications require to upgrade or modification, there isn’t any need to stop the entire app and upgrade everything together. The ability to upgrade and take a separate decision for a particular micro front-end gives a new approach to the front-end which was not possible before.

One more point is we now have modern technologies and a diverse tech stack for the front-end. The incremental upgrade allows experimenting with the newest technology that is suitable for the particular part without worrying about an interruption in customer experience.

A micro frontend is the best solution to migrate the legacy codebase to the new environment. It also comes with the risk associated with dependencies, migration, and technical challenges. In such environments, issues need to be solved quickly and integration requires your greater attention. But, gradually, piece-by-piece you can go ahead.

As it allows independent development and deployment, the organization can have autonomous teams that are working on a different part (can choose from the idea, execution, and deployment). They share a common vision among the team and are completely focused on delivering beyond what asked for. It further enhances collaboration between teams, and each team can have full ownership of everything they need to deliver to the end customers.

Every coin has two sides; likewise, there are several limitations of micro front-end architecture.

Before going with the micro front-end, it is wise to check all the feasibilities and maturity to adopt this trend.

These brands are already using it and many companies are planning to adopt it, making it easier for the developers to go ahead at their own pace by working on new technologies and in smaller chunks.

Why micro-frontends is not replacing component architecture is nicely explained by Mr. Luca Mezzalira in this article. He says,

“Components are definitely valid solutions, many companies are using them every day with great success, but are not the silver bullet for everything; the project, the team, the business, but more in general, the context has to fit otherwise we try to fit a square into a circle and we don’t always get what is expected.”

Front-end World Is Running Fast: Are You?

Whether you adopt micro front-end or not, one thing is sure that front-end is becoming more diverse, capable, and complex. We have plenty of choices to perform different jobs and we have to ensure whatever we choose, delivers quality, consistency, and great user experience which is expected from your brand.

Along with that, the front-end environment requires a scalable architecture that can meet modern business goals in a more manageable style. The micro front-end is the right technique to experiment with the newest technology and cross-functional team environment. We hope that you clearly understand what the micro front-end is and if there is anything you want to say, our comment box is waiting for you!