We live in a modern world where there’s more than one way to do the same thing with different approaches. This applies everywhere including the tech world. A plethora of concepts and technologies are coming at the front every single day, leaving no room for outdated and traditional techniques. Not only tech giant, every company seems like making most of the technology to stay ahead of the rest. To do so, one needs to be aware of trend-setter technologies and modern concepts which are proven as money-spinning aspects for the majority of the industry verticals.

Mobile becomes a mainstream strategy. One thing that hasn’t changed over the years is the influence of mobile apps on business organizations. Mobility continues to drive sales and it is a wise decision to invest in mobile app development at present. While there is no straightforward formula for making your app successful, paying equal attention to several factors can help you win the game. The factors may include engagement ratio, time-to-market, exposure, ground-breaking marketing strategy, and budget of an app.

Here, in this article, we will discuss how you can frame appropriate strategies that ultimately earn you success. We will talk about cross-platform apps, hybrid apps, native apps and tools such as NativeScript and Ionic and, also a detailed NativeScript vs. Ionic comparison. 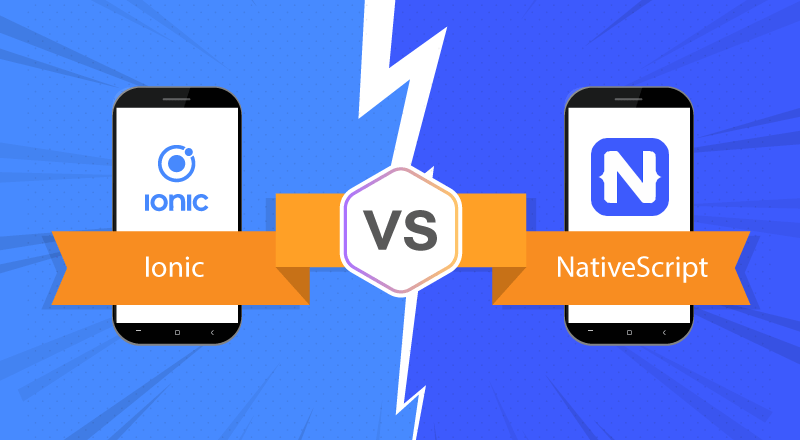 Cross-platform apps can run on multiple platforms using the same code base which attracts many developers and organizations to embrace it. It is one of the most-discussed topics of this era with the topnotch frameworks, tools, and technologies.

Native apps, on the other side, are built using a specific language for a specific mobile operating system (Object C for iOS and Java for Android). Many believe that native apps offer unparalleled user experience and functionalities that can’t match by other types of apps.

Going technically, a hybrid app is actually a web app built using web technologies such as HTML5 and JavaScript and then wrapped in a native application. Due to their low cost, faster time-to-market and high feasibility, it is extremely popular among developers and business firms to develop an app which runs across all the platforms in the low budget without a major compromise on user experience.

If we talk about the tools for developing such apps, there are two leading frameworks to consider – NativeScript and Ionic. Let’s take a look at the differences between them and explore their pros and cons step-by-step.

Currently, Ionic 4 is about to hit the market after the successful launch of Ionic 3 and Ionic 2. It is expected that a new version of Ionic must equip with many new features and enhancements that can take hybrid app development to the next level.

Ionic is evolved to a great extent since its origin and has a sustainable future in the app development market as per the current scenario. With Ionic, you can build a single app for multiple platforms leveraging web technologies. It uses plugins like PhoneGap/Cordova to deliver the native-like experience.

As they have mentioned on its official website, NativeScript is an open source framework for building truly native mobile apps with Angular, Vue.js, TypeScript, or JavaScript.

Ionic offers the complete solution for hybrid mobile app development. Ionic was created in 2013 by Drifty who previously developed products like Codiqa and Jetstrap. Max Lynch, Ben Sperry, and Adam Bradley decided to come up with something innovative that would meet the modern web standards and that’s how they launched Ionic.

According to Wikipedia, Ionic developers reportedly created over 1.3M apps with the SDK. At present, there is a lot of buzz around Ionic 3 and Ionic 4 and most recent release, Ionic 4 (a beta version is already out) is power packed with advanced features.

“Ionic 4 continues to solidify its roots as Angular’s leading mobile solution. And we’re taking it even further by adopting new Angular tooling and features, ensuring that Ionic apps follow Angular standards and conventions, and benefit immediately from new Angular features the community has to offer.”

NativeScript is built by Progress and focuses on modern and feature-rich business apps. It is an open-source platform and gives direct access to any native API and component using JavaScript. It is designed to leverage web skills such as JavaScript, Angular and CSS to build native, cross-platform apps.

NativeScript development has gained in popularity worldwide due to its extraordinary features and capability to build native apps for iOS and Android.

Here are some backing points which might help you recognize the popularity of this framework.

One of the key differences between both these frameworks is that NativeScript apps can directly run on the native device. It does not need any cross-compiling or necessary browser interaction.

Unlike NativeScript, Ionic needs plugins to cover app in native appearance. And it can be done without any hassle through command line tool.

They almost do the same thing with different models. The applications are, however, cross-platform apps whether you use Ionic or NativeScript. Both, Ionic and NativeScript leverage AngularJS which is, again, pretty good for developers and organizations.

Where NativeScript Wins Over Ionic?

When Is Ionic Your Go-To Framework?

Ionic app development delivers excellent performance across all the platforms. The supported platforms are Android, iOS, and Universal Windows Platform (UWP) when you create apps with Ionic. The key benefit of Ionic isn’t the periodic evolution or an update. It allows developers to leverage Angular and this same reflects in Ionic 2 and 3.

However, it relies on WebViews to build the interface and uses plugins to access device hardware features.

Ionic vs NativeScript: A Quick Comparison

The Benefits of Ionic:

The Drawbacks of Ionic:

The Pros of NativeScript:

The Cons of NativeScript:

As both frameworks are favorable choices for cross platform app development, you can’t really decide which is best. It simply depends on the type of the app, requirements, and your targeted audience. You can develop Android, iOS, and Windows applications using web technologies such as JavaScript, HTML, CSS, and XML. Both are widely-used for developing advanced cross-platform apps using different approaches and methodologies.

There are endless possibilities. You can choose any of these frameworks to convert your idea into reality. If you feel anything is missing in this NativeScript vs. Ionic comparison, you can tell us via comments below.