Of all popular runtime development environments, Node.js has its own reputation quotient. Thanks to its compatibility with JavaScript, it has carved a niche for itself in the business segment. Created in 2009, Node.js released the latest stable version 17.8.0 a few days ago.

It has many salient features that make it compatible with peer technologies and well-liked by the developer community. There is a huge business community that has been leveraging Node js development services
– PayPal, Netflix, eBay, Reddit, Microsoft, IBM, Yahoo, Yammer, Amazon, LinkedIn, GoDaddy, Tumblr, and many more.

Just as the tech world operates, all technologies have their own set of competitors. This article discusses the best Node.js alternatives that are rising in popularity. But prior to that, let us understand the fundamental concepts of Node.js.

Node.js is an open-source, cross-platform, back-end JavaScript runtime environment that runs on the V8 engine and executes JavaScript code outside a web browser. – Wikipedia

Node.js is a popular frontend and backend environment that is utilized for non-blocking, asynchronous, event-driven sensors owing to its single-threaded competence. It is free and executes seamlessly on different platforms like Linux, Windows, Unix, Mac OS X, etc. It makes use of JavaScript on the client-side and server-side. It is designed to be used for traditional, scalable network applications, websites, and API services.

It creates applications that are light weighted, effective, and ideal for data enriched applications spread vide a variety of devices. Node.js works on the concept of a single thread offering support to tens of thousands of connections, in parallel. It sends requests to the server without waiting for it to get served.

It generates dynamic page content, collects form data, adds/modifies/deletes data in the database and files on the server. It empowers developers to make use of JavaScript to write the command line tools and ensure server-side scripting. It unifies web app development with a unified language rather than making use of multiple ones for server-side and client-side. Certain applications of Node.js include single-page apps, I/O bound apps, data streaming apps, data-intensive real-time apps, JSON API-based apps, etc. 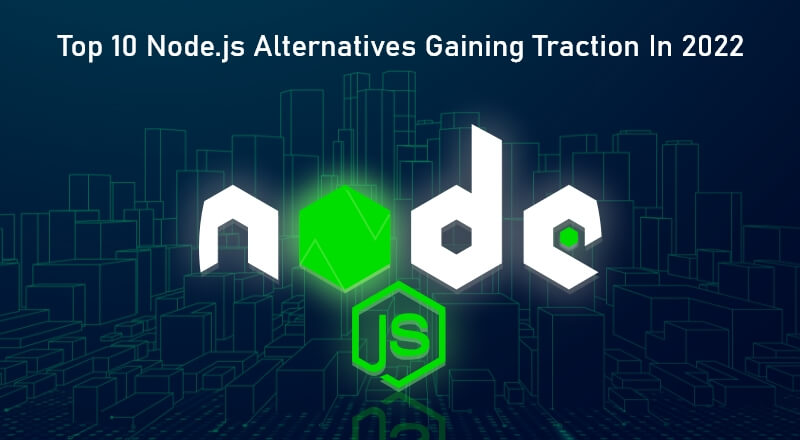 Though Node.js is quite popular, there are certain known technologies that are considered good alternatives to Node js. Here are they:

Let’s now have an overview of the listed Node.js competitors.

As a popular Node js alternative, ASP.NET is an open-source, server-side web app framework that offers complex API real-time development, creation of dynamic web pages, Microservices, and web-based applications. Powered by Microsoft, it empowers developers to create interactive and data-based applications over the Internet. There are several controls like buttons, text boxes, forms, etc. form an integral part of this server-side technology. It enables computer code to be implemented by an Internet server. It is a free framework that makes the best use of HTML, CSS, and JavaScript for the creation of websites, and APIs with the help of real-time technologies like Web Sockets.

Sencha Ext JS is a popular and comprehensive JavaScript app framework that works well as an alternative to Node.js, for creating interactive, data-rich, and cross-platform web applications with the help of technologies like DOM scripting, DHTML, and Ajax. It is a unified component framework that can be made use of, completely for creating single-page applications for any modernized device. It includes more than 140 well-tested and pre-integrated UI components like grids, pivot grids, HTML5 calendar, trees, lists, forms, D3 adapter, menus, panels, toolbars, windows, etc., each having an effective performance. There are effective Sencha tools that help create complete apps with effectiveness.

As an open-source, web, and mobile application framework powered by Google, AngularJS has been influential in enabling the development and testing of apps with MVC and MVVM architecture. It is a popular toolset for creating the best-suited app development framework. Being completely extensible and a JavaScript framework, it gels well with third-party libraries and can be added to HTML pages with a script tag. It is considered ideal for single-page applications and is easy to learn. It is a structural framework for dynamic web apps and can utilize HTML as the template language.

Elixir is a well-known alternative to Node.js as it is a dynamic, functional language for creating maintainable and scalable applications. It is open-source and highly compatible with Mac, Windows, and Linux. With the help of the Erlang programming language, Elixir creates scalable applications since the code is horizontally and vertically scalable. There is effective resource management where multiple processes execute simultaneously with equal efficacy. It empowers its users with quick, effortless, and simple coding and maintenance of code. Its basic concept is best suited for creating multiprocessor architectures. It possesses some unique properties like hot code replace, fault tolerance, and the competence to work in real-time.

Perl refers to a strong family of two programming languages, both of which are interpreted, high-level and general purpose. It comprises of Perl and Raku. It has an ever-increasing user base with multiple work segments. It offers its users a strong text processing capability and seems like shell scripting, C/C++ interface, and SED. It is expendable with multiple modules that are accessible globally ad is a general-purpose language used for text manipulation, web development, system administration, GUI development, network programming, etc. Perl is a flexible and powerful alternative to Node.js since it is highly competent and a feature-enriched language.

Powered by Google, the Go programming language is a reliable, fast, and effective software that is syntactically like C. It has salient features like garbage collection, structural typing, memory safety, etc. It is an open-source language that is easy to learn and master. It possesses a robust standardized library with inbuilt concurrency. There is an expanding environment of tools, communities, and partners. It is a strongly typed, compiled language that is written to create scalable and concurrent software. Developers can create their own serverless compute platform – Google Cloud Function in Go.

Ruby has been a widespread, interpreted programming language for years and has a fan following of its own. Just like Python, it is a general-purpose language covering many other applications like prototyping, POC, data analytics, etc. Its popular implementation is Ruby on Rails – the development framework that has its own popularity quotient. It offers faster speed and supports .NET and Java Virtual Machine (JVM). As a scripting language, it is used in all types of application development – frontend, backend, web development. There is a high-level syntax used and hence is scripted, meaning it is an interpreted language rather than a compiled language.

Rebol is a known, cross-platform programming language that is best for network communication and data exchange. It is being leveraged for programming client-based and server-based Internet applications, multimedia apps, database apps, and other utilities. It is a multi-paradigm approach, with different typing disciplines and data types. Rebol is considered a fit for smaller-sized domains. Files are easy to share, synchronization is easy archiving files is easy and quick. It is a secure platform with strong capabilities for data creation, exchange, storage, retrieval, and administration.

Ceylon is a multipurpose programming language that has a structure like C# and Java. It has been known for writing large programs in teams. It is an object-oriented language that is statically typed with a blocked structure. There is a comprehensive and broad type of checking by the compiler. There is lexical scoping and recursive syntax for statements. Ceylon is powerful, scalable, and interesting to indulge in, for developers. Its supports cross-platform compatibility and hence is liked by developers. It is modular in nature and its code is organized into packages and modules with the strong support of modular repositories.

Deno is free, open-source and a secure runtime for JavaScript and TypeScript. It is created with V8 – Google’s runtime engine for JavaScript, Rust, and Tokio and works seamlessly with Mac, Windows, Linux, etc. The features of Deno are designed in such a way that they enhance the competencies of Node.js. It has an important focus on security aspects in which the runtime has no access to the network or file system or scripts. Deno loads the modules through URLs just the way browsers do. It bundles the entire codebase into a single file offering a great chance for developers to go in for Deno as an alternative to Node.js.

As they say, everything has an alternative and so does Node.js. The above well-compiled Node.js alternatives are stated to provide detail into the contemporary technologies that are doing well, apart from Node.js. The significance and popularity of Node.js remain untouched though! It is up to organizations to decide which one to choose, based on parameters affecting them just like the resources, skills, project budget and timelines, organizational goals, workflow, etc.