Python Development – Trending High For Year 2020, A Must Learn!

Python is powerful… and fast; plays well with others; runs everywhere; is friendly & easy to learn; is Open. – Python

Before we go into the trends of Python development that are dominating the year and the next, let us quickly glance through what Python is.

A Brief History of Python – The Reigning Language Today 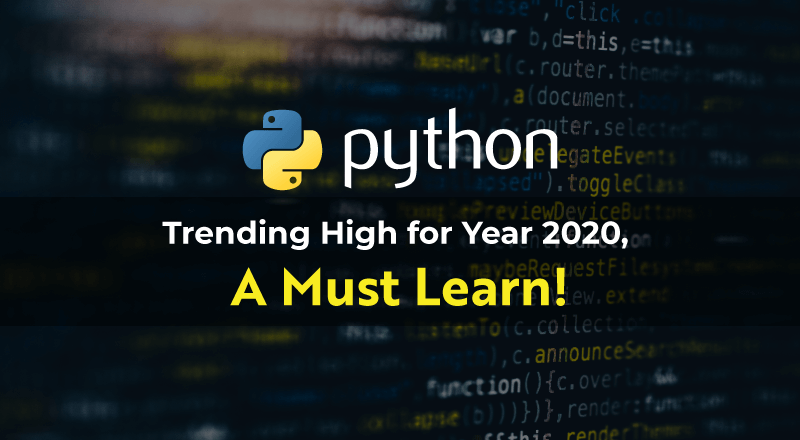 Python frameworks have always been its pillar of strength. The trio – Django, TurboGears, and Pyramid are instrumental in providing faster service, a prepared arrangement for application development thereby lessening the lines of code.

The coming year promises to have fruitful upgradations to the 3 frameworks – newer libraries, plug-ins to leverage the potential of this wonderful language and increase the user base, multi-fold. Let us have a fleeting look at the trio and what is expected out of them in the year 2020:

Being one of the most efficient and flexible Python frameworks, Django looks at minimizing the development efforts and time for web apps. Since it is open-source, there are regular high-end upgrades on its plug-ins to ease the entire procedure. There are varied third party libraries that have increased the popularity of this language amongst leading enterprises like Spotify, YouTube, etc.

The year ahead is expected to showcase newer versions and updates of database libraries and other important components to maintain its supremacy.

It is a full-stack framework, created to smoothen and fasten the web app development procedure. This framework depends upon Ruby on Rails and was created with the MVC pattern. It facilitates developers to rebuild business sense throughout platforms and lessen the lines of code.

The year ahead is sure to witness a betterment in its stability and capacity components. There could be a microframework coming up that will assist developers in creating software speedily and thereby save on time, money and efforts.

Considered as the ‘start small, finish big, stay finished’ framework by the taskforce behind it, Pyramid is apt for developing basic web apps quickly and is lightweight and flexible in nature. It is based on the fundamental of simplicity and hence is a favorite of developers who have enough capability. It may not appeal to novices though.

The year 2020 shall witness increasing usage of this framework, especially by experienced developers since it has a minimalistic framework and offers a lot of freedom.

The year has seen a steep rise in the number of users going in for Python. One of the researches by Stack Overflow shows that there are a greater number of IT professionals who wish to learn Python over the peer languages.

Because of its multiple attractive features, Python has grabbed eyeballs of enthusiastic developers as well as novices. Easy to learn, open-source, free to use, lesser lines of code, detailed documentation, great community support – what more would a developer want! Not that developers are not using the other languages like Java and C, but there is more inclination towards Python and that is visibly clear. There is a lot of Python that can develop apart from websites and web apps – video games, business software solutions and more.

This year has seen Python being adopted by several organizations, belonging to various segments and sizes. An overall impression is that there are many large-sized enterprises that have preferred Python over its other counterparts.

For e.g., Facebook has been using Python comprehensively. Facebook’s development taskforce is all bent over Python for the maintenance of its libraries. Most of its code is written in Python.

Organizations Leveraging the Potential of Python

Data analytics is going everywhere and there is no business untouched. Trends suggest a steep increase in the data analytics market in the coming year. This indicates a huge rise in Python usage since more than 50% of Python developers are using it for data analytics.

The presence of numerous libraries in the Python family is the core reason why developers are opting for it when it comes to data analytics. There are many task-oriented libraries created by Python’s open source community that are a delight to developers.

The time to come shall see even more data analytics libraries getting added since the big data scenario is speedily expanding.

Python’s highlight is the speed at which developers can write code, scripts and automating tasks. Python is a great assistance when it comes to automation. This is going to be the highlight for the next year as this will attract more developers to stick to Python.

Yet another feather in its cap is its flexible and versatile nature. It can adjust well and work seamlessly with multiple languages, frameworks, hardware, architecture. Working with Python implies you have a lot of flexibility to showcase your creativity and fulfill your aspirations.

Because of all the above features of Python, these modern-day software technologies find themselves incomplete without Python.

Another major advantage that users benefit from is the integration of systems in Python with other systems. It is extensible which means that you can code a partial chunk in Python and yet another in another language. And hence it is used to plug into enterprise applications.

Python, in the area of cloud computing, holds a lot of importance with least competition. It is considered as one of the most popular cloud-enabled languages. It is utilized by Google in many enterprise-grade software applications.

The very fact that Python is being taught as a programming language in academics, proves the excellence of Python and surely in an increasing manner. Since Python is in sync with the latest technologies, is easy to use and learn, it is the ideal course material for novice developers. There are many developers who have learned it themselves, without any external help.

Python has a large community base, with well-defined support mechanisms and documentation. This value adds to the popularity of Python, on a large scale. Python’s community is huge and aims to grow further and help all segments of users. There are ready answers to almost all your queries. There are expert blogs available online to help increase the knowledge base.

Python is used for the frontend, backend, data science, web app development, mobile app development, machine learning, AI and what not! It is a versatile language that attempts to suffice many objectives, ranging from object-oriented programming to functional aspects. It also is considered a scripting language that uses scripts to get information.

It is a known fact that Python is free of cost and that encourages novice developers to give it a try. There are the least risk and cost involved. Since it supports cross-platform compatibility, developers are keen to give it a priority. Its open-source nature empowers community members to contribute to Python’s betterment.

On a Wrapping Note

Python app development surely has a bright future and a brighter 2020. Do we now need to say anything more about why Python is almost an indispensable ingredient in the software life cycle! The reasons are quite evident as above. No wonder it has been giving the peers a tough run for their popularity!