With technology advancing, the implementation of message queueing services has been rapidly increasing. These message queueing tools offer effective communication and coordination for involved applications. They are meant to ease the coding of applications and enhance performance, accuracy, and scalability. Two famous names in this technology often compared are SQS vs Kafka.

SQS vs Kafka is a popular comparison since they are not the same. SQS is a wholly managed and scalable queueing service on AWS whereas Kafka is a fast and fault-tolerant publish-subscribe messaging system. As you choose between the two, it is significant to note the technical differences as well as the details of costing and implementation.

Through this detailed article, we attempt to list the intricacies of both technologies with details of their features, pros, cons, integration tools, alternatives, and a comparison between different parameters. This will prove helpful as you choose between Kafka vs SQS.

Amazon Simple Queuing Service (SQS) offers fully managed message queuing for microservices, distributed systems, and serverless applications. It facilitates an easy connection between distributed systems and serverless applications, fastening procedures and lessening complications through a robust messaging queue. It focuses on the successful delivery of messages and their processing by respective clients.

Users can easily send, store, and receive messages through any type of system without bothering about the volume being transmitted or encountering downtime. You can select between a standard queue or a FIFO queue. Both are perfect for reaching out to a single user with the same type of functionalities. A standard queue is suggested for enhanced output and order while a FIFO queue is suggested for processing messages exactly once and in the same order and it enters the queue.

SQS is known to relieve developers from the configuration and management of queue structures as a managed service. It ensures scalability and is considered best for time-critical applications being managed by a differently-sized development task force. It does not operate as a database and hence users are unable to find out which messages are to be received.

As soon as a message arrives, SQS moves it from the queue so that it doesn’t reappear. Once the message is hidden, the user performs relevant processing and removes it from the list. If it is not removed after the time is through, it is back to the queue with a future request based on the timeout period set by the user.

What Is Apache Kafka?

Apache Kafka is an open-source distributed event streaming platform used by thousands of companies for high-performance data pipelines, streaming analytics, data integration, and mission-critical applications. As a distributed data store, it is best when it comes to real-time applications and the continuous data being generated by disparate data sources. Kafka is apt at managing this incremental data supply with ease and efficacy.

It empowers users for the storage of streams of records, maintaining the order in which they are created. It published-subscribes to record streams and then processes those streams in real-time, for the best of results. It unites messaging, storing, and steam processing under a single application and hence offers detailed insight and better processing competencies to offer a fault-tolerant managed service.

As a distributed messaging platform powered by Apache, Kafka is an enhanced data warehouse that performs effective data transfer and processing. There is continuous generation of data from multiple data sources through data records. Kafka deals with the continual flow of data either sequentially or incrementally. It is a middleware solution that maintains data streams on servers in the form of logs.

Kafka is supposed to be implemented onsite, in the applications’ architecture setup, either through virtual machines, standalone servers or Docker containers. It offers SDKs in different languages. The events can further be classified into topics for a better arrangement of the communication patterns in applications and later, be partitioned on different servers within the cluster for high-end performance and resilience.

SQS vs Kafka – Pros and Cons

Kafka vs SQS: Tools That Can Be Integrated

Tools That Can be Integrated with SQS –

Tools That Can be Integrated with Kafka –

Kafka vs SQS: Companies Using Them 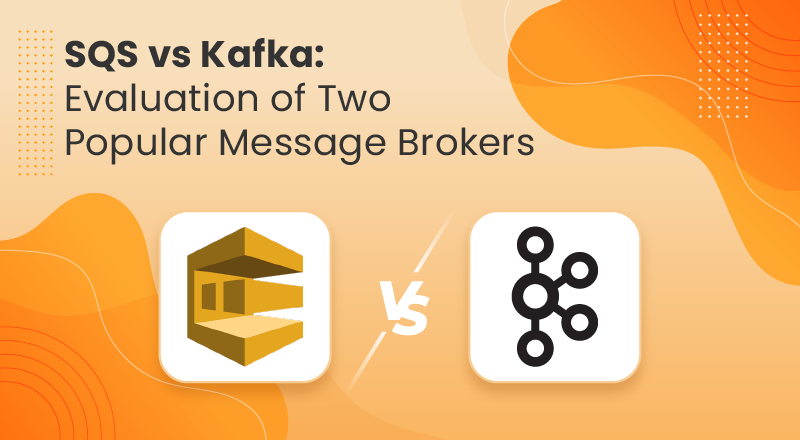 SQS vs Kafka: An Evaluation Based On Parameters

As the demand for message queueing tools increases, a comparison between the two stalwarts is bound to happen. Though there are certain similarities between them, there are evident differences too that can help you decide which one to choose and why. Here are the distinctions centered on various considerations:

SQS vs Kafka: Summing It Up

As we look at the possible and popular options for messaging queueing tools and understand what SQS is and what is Kafka, the main considerations are the type of messages that are being transmitted with their format, the daily amount of work that will be encountered, and the infrastructure of the entire applications.

SQS helps in reducing the administrative load to execute a huge message pool at cost-effective rates. It is meant for moving background activities to an asynchronous pipeline. Kafka is ideal for huge message loads with sequential I/O operations and demands minimal hardware. It can be more scalable and can be utilized as a stream processing pipeline.

Apart from these considerations, you must understand organizational requirements completely to find out which type of message-broking system will suit best. Whichever you select as you compare SQS Vs Kafka, there is good in both. It is just the typicality of each, related to the above parameters, that may help you choose either.