The cloud revolution has been into our lives for almost a decade now. It can be said that Cloud Native is a path to innovation established in order to take complete advantage of Cloud Computing. Cloud Native is recently one of the biggest trends in the software development industry.

A survey of 100 IT decision makers conducted by NetEnrich stated that 85% of them claim moderate or extensive use of Cloud infrastructure.

This proves how important the cloud is, for an IT infrastructure.

Benefits of Cloud Native vary as per the requirement of enterprises in various ways. Some enterprises use this for reduction of costs and improvement in margins. While for some businesses, this might be helpful in offering speedy deliverables, or any other goal.

But, What Basically Is Cloud Native?

It is just an approach to build and run applications.

Confused how just an approach can help you achieve many aims? Well, if you are looking for an answer to all these questions, you have landed at the right place. This blog will solve all your confusion regarding Cloud Native.

When Did Cloud Native Emerge? – The History

The features of the applications were suitable only for a static environment. Therefore, in order to deploy the application in the cloud, some modifications are required.

The cloud-ready applications were developed in such a way that there were dependency created on the Operating Systems as well as the hardware.

The cloud-ready applications were developed custom to any specific environment. Therefore, it requires custom configuration which made the maintenance difficult.

The cloud-ready applications were built with a special configuration and were limited to server capacity. Expansion of scale also required the expansion of infrastructure.

Due to these types of challenges faced by traditional cloud-based applications, cloud-native applications came into the picture.

What Is Cloud Native? – A Detailed Insight 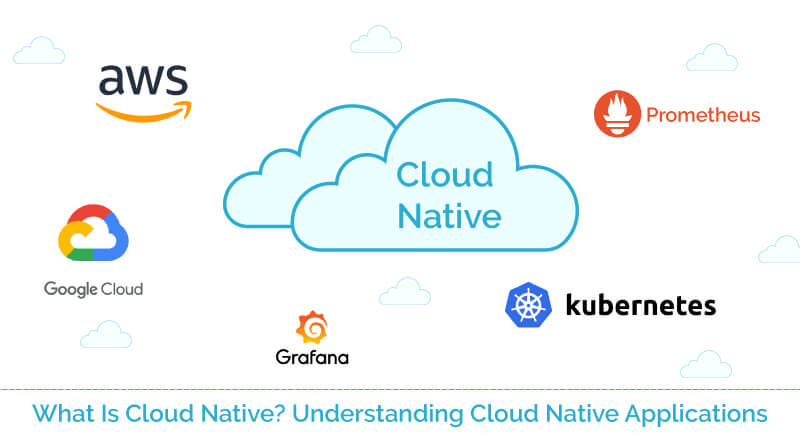 The Cloud Native applications are developed as microservices running in the containers to maximize resilience, manageability, and scalability.

According to Mike Kavis, Managing Director with Deloitte,

“A cloud-native app is specifically architected to run in the elastic and distributed nature that is required by the modern cloud computing platforms”.

The Stack: The Different Stages Of Cloud Native?

Cloud Native app development comes with five fundamentals Cloud, DevOps, Containers, Orchestration, and Microservices oriented architecture. Cloud Native app also includes Agile Methodology and various modern methods of deployment in an application. In order to get an in-depth understanding of the working of Cloud Native, let us study the different stages of the Cloud Native application.

A Container is an exclusive package for your software which consists of everything you might require to build an application altogether.

To run an application fully on the Cloud platform, the container is just the first step. There are many challenges you may experience after the containers start running. Furthermore, you might require to manage various things manually.

Tasks such as monitoring the system, switch the container on and off as and when required, adjusting all the configuration parameters are done manually. But, in order to do all these tasks manually on time, we need to be as quick as the Flash (which ain’t possible for everyone). This is where we require the tools that can automate these tasks. These tools are called orchestration tools and the process is known as Orchestration. Some of the well-known orchestration tools are Kubernetes, Apache Mesos, Docker Swarm, Nomad, Amazon’s ECS, Kontena.

The approach utilized for developing the Cloud Native application by gathering various small independent services that run its own processes and implements their business capabilities is called microservice. All these work together and manage the overall functionality of the whole system. The development of Cloud Native applications is done as a system of Microservices. With this approach, scaling can be made highly efficient as each of them has one functionality, well-defined boundary, and API.

There are certain rules and guidelines to be followed to build a Cloud Native application. These rules are described in a manifesto named Twelve-factor app developed by Heroku, a leading Cloud computing company.

DevOps is basically the practice wherein development and operations are combined in order to reduce the life cycle of system development. It aims at delivering the application enriched with quality features to meet the customer requirements. DevOps lets the organizations deliver applications at a fast pace. It creates an environment where testing, development, and launching of the software quick, efficient and consistent.

With the advancements in the technology field, the enterprises have begun focusing on differentiating their business to stay ahead of the competition. These applications are specifically built for the Cloud model. The major purpose of implementing Cloud Native application is to benefit fully from the Cloud computing system.

Below mentioned are the certain benefits of using Cloud Native applications.

Cloud Native application tends to offer a competitive advantage as it lets businesses build and deliver applications quickly in response to customer requirements.

Cloud Native applications aren’t just meant to work on public clouds, but applications built can run on both public as well as private clouds without any modification.

With Cloud Native applications being resilient to failures, they handle the outages and enable corrective actions. The application starts processing instant moves from one data center to another without any interruption to the service in case of any failure.

Quick deliverables are the aim of every company in the software industry. SME or large scale enterprise, all of them achieve this aim with the use of Cloud Native. With Cloud Native, the time utilized for the development of the application can be moved from months to days or hours. Ultimately, Cloud Native is the reason for organizations to be more responsive to the client’s requirements.

With Cloud Native, highly efficient applications usually cost less. This application lets you pay for additional resources only when it is required. You do not need to pay for the resources even when you don’t have a large number of visitors.

Which Companies Use Cloud Native Application?

Tech Giants have already adopted. Haven’t You Yet?

Cloud-Native is redefining the way in which enterprises scale their businesses. Below mentioned are the ones that adopted Cloud Native:

When Cloud Native Should Be Used?

Cloud is a game changer in the competitive world of technologies. Cloud Computing is entirely shaping our ways to live and work. Cloud Native is perfect for entrepreneurs who are looking to enhance their existing product by reducing the operating costs and improving margins. Cloud Native is also a perfect option for someone who wants to build an application entirely on Cloud. The organizations that plan for reinventing themselves through digital transformation require Cloud-Native application in one or the other way.

Today, over 50% of US enterprises have started utilizing the Cloud to some extent. This trend is set to accelerate, with Infrastructure as a Service (IaaS) growth at 40%.

Cloud-Based vs Cloud Native. What Is The Difference!

Cloud Native: One Of The Biggest Innovations