Kotlin, the popular programming language, has over 117 thousand apps that have been leveraging Kotlin and the total number of downloads are over 240 billion.

Does one need any more statistics to prove its increasing worth?

Kotlin is an open-source, statistically typed, and general-purpose programming language created by JetBrains. It is now officially endorsed language by Google for Android App development. It is completely interoperable with Java and primarily aims for JVM. Google, Pinterest, Square, Tinder, Airbnb are some of the many top apps built with Kotlin. It has great community support and is open to community feedback.

Continuing the success journey, Kotlin recently came up with its latest release – Kotlin 1.4.20 on November 23, 2020, stuffed up especially for its KMM users, with newer JVM features, enhanced performance, exception handling, and extensions for JDK Path. 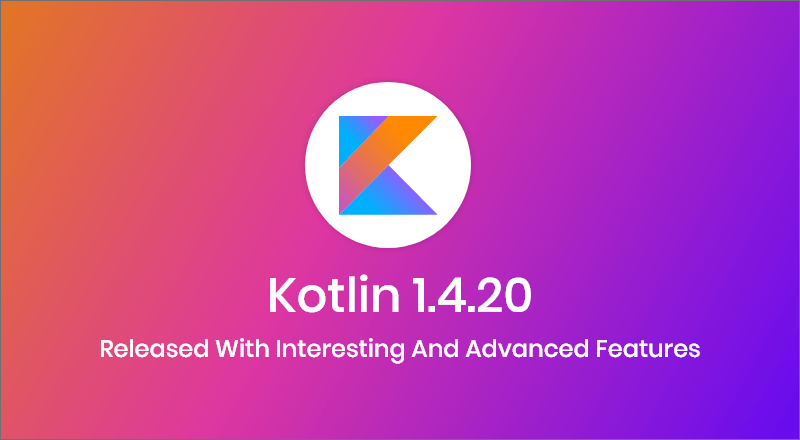 The newer version of Kotlin has all its eyes on the Kotlin Multiplatform Mobile users. All its new features are targeted towards offering the best of features to its KMM users. Features like increased performance parameters and better exception handling are the ones that take a priority when it comes to making its users happy and satisfied.

Since they have great community support, it becomes easy to get genuine feedback regarding the updates and how effective they are.

There has been an addition of the novel JVM 15 target on the Java Virtual Machine that emphasizes on enhancing the current functionalities and performance, along with repairing errors. This includes assistance for newer JVM features like string concatenation through invokedynamic.

Kotlin with JavaScript has always been a great combination and this new version brings about exciting changes such as the inclusion of active templates for project wizard, augmented DSL for effective control, a new IR compiler for better compilation, etc.

The current release of Kotlin includes technical upgrades like updates in the Gradle DSL to streamline project setup, selective yarn dependency resolutions, disabling granular workspaces, effective wizard templates – Browser application, React application and NodeJS application, ignoring compilation errors. Some of these features are yet in the experimental stage and hence will be refined based on community inputs.

One of the prime areas of focus in this version is the performance criteria. There is the inclusion of a new feature – a prototype of the newer escape analysis system. This feature is about to be refined and enhanced in upcoming versions. Some other features that are included in this version are bug fixation and polishing, escape analysis, opt-in wrapping of Objective-C exceptions during runtime to prevent breakdowns, CocoaPods plug-in enhancements, revised integration with Xcode via some Podfile updates, extended support for Xcode 12 libraries.

The enhancements in CocoaPods plug-in focus on rebuilding dependencies only when needed, competence to append dependency on library from various sources like customer spec repository, etc.

There is compatibility with libraries published in this version – if there is a need to use such a library, users will have to upgrade Kotlin to this version. In case the users do not enable hierarchical project structure support, they will be able to use the earlier versions with the library.

There are certain standardized library changes that have been effective with this version of Kotlin. Experimental extensions for java.nio.file.Path, no need to call static methods of Files, availability of extensions in kotlin-stdlib-jdk7 module, enhanced performance of the String.replace function with variations suggested by the Kotlin community members.

The Kotlin Android Extensions have had an important role in enhancing the popularity of Kotlin in the Android world. These extensions helped developers with effective tools to lessen boilerplate code – synthetic views and Parcelable implementation generator.

The new version has the Parcelable implementation generator extracted with a deprecation cycle for the remaining portion of syntetics. This is available in the new kotlin-parcelize plug-in and must be applied instead of the kotlin-android-extensions.

On A Wrapping Note:

As Kotlin loyalists, developers are going to enjoy using these new features and as per Kotlin’s open policy, they are free to give their opinion on the features and their execution. Android Studio will suggest an automated update to Kotlin 1.4.20. It can also be done manually!