62.9% of developers who are developing with Kotlin have expressed interest in continuing to develop with it

Kotlin’s increasing popularity for Android app development made people think it will soon replace Java for Android development. Kotlin, a modern-day, pragmatic, and cross-platform language are well-accepted and well-loved by the android developers community.

Kotlin is a cross-platform, modern, concise, and general-purpose programming language designed to fully interoperate with Java. It is focused on safety, interoperability, great tooling support, and clarity.

It is developed and maintained by JetBrains, a leading software development company making great IDEs for popular programming languages.

Why Kotlin For Android Development?

Google’s official support for Kotlin made this question more obvious. Android development has become Kotlin-first since Google I/O in 2019. This is because Kotlin is considered better than Java in many cases. It is expressive, type-safe, and null-safe. While it is not true that Kotlin is a replacement for Java but it works with the Java language flawlessly, making it easy for the developers to leverage Kotlin libraries and Java at the same time. Since it is 100% interoperable with Java, developers can use this as little or as much of Kotlin language as they want.

Kotlin is used by over 60% of professional Android developers to improve productivity, developer satisfaction, and performance. 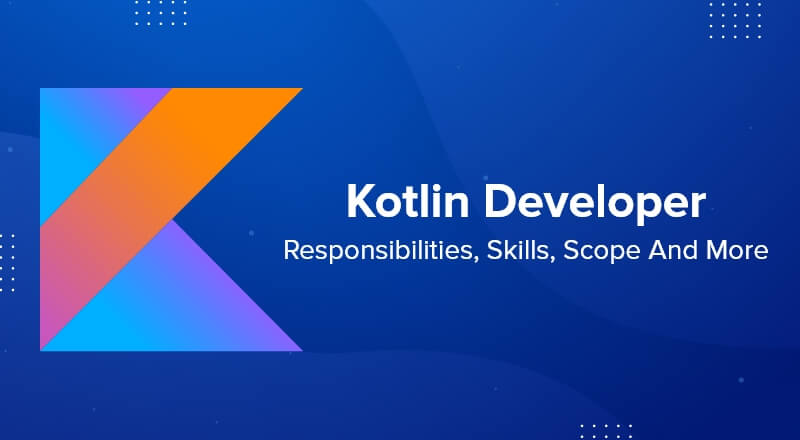 Who Is A Kotlin Developer?

The primary focus of android Kotlin developers is to create android apps with robust backend integration. They are responsible for creating and maintaining android apps right from requirements to release and continue product development.

Here is the list of required skills to become an Android Kotlin developer:

The above list includes non-technical, technical, and general skills that are a must-have to start your android developer career.

So, now you know what skills you should have and what responsibilities you have, let’s move to the salary part.

Kotlin Developer Salary: How Much Does A Kotlin Android Developer Make?

We all know that the more years of experience, the higher you will get. The salary of Kotlin developers depends on many factors such as expertise level, country, and skills.

According to PayScale, the average salary of a software developer with Kotlin programming language skills is ₹720,000 yearly.

According to Talent.com, entry-level Kotlin developer positions start at ₹380,000 per year. The average Kotlin Developer salary in India is ₹900,000 per year based on 180 salaries reported.

According to ZipRecruiter, the average annual pay for a Kotlin Developer in the United States is $127,541 year.

The average Kotlin Android developer salary in the United Kingdom is £60,464 per year. For an entry-level professional, it can be around £40,000 per year while experienced workers can earn up to £85,000 per year.

Kotlin has become one of the top programming languages with the fastest-growing communities across the world. Android developers can easily switch to Kotlin with a little learning curve. Here are some of the best resources to learn Kotlin.

This official website is a great start to learn the Kotlin language with its detailed and comprehensive documentation along with step-by-step tutorials.

Keddit is an 11-part series by Juan Ignacio Saravia to explain Kotlin and its features while developing an Android app.

Antonio Leiva is an official Kotlin certified trainer by JetBrains and his books are recommended by both Google and JetBrains to learn Kotlin.

This contains a curated list of awesome links, videos, libraries, documents, and frameworks. It is well-organized and useful to Kotlin developers.

What Is The Scope For Kotlin Developers? Is Kotlin The Future Of Android App Development?

Kotlin is open-source, modern, and fully compatible with Java. Google becomes Kotlin-oriented for android app development and that has made all the difference in the growth of Kotlin. After Google has declared Kotlin a preferred language, the growth of this language has skyrocketed. In addition to that, it has a strong community that consistently making efforts to make it one of the top programming languages.

Google, Trello, FourSquare, Netflix, Pinterest are some of the well-known companies using Kotlin. Kotlin certainly has a bright future and it is being said the future of Android programming. If you become a Kotlin developer, you will boost your career along with work satisfaction and monetary reward.

Many companies prefer the Kotlin language but knowledge of Java language helps you broaden your horizon for android development.

You can use Kotlin in place of JavaScript as a web language in front-end development.

JetBrains developed Kotlin and then open-sourced it.

Yes, Kotlin is good for game development with the libGDX framework and good IDE support.

Knowledge of Java is not a must to learn Kotlin but fundamentals of OOP and Java will help you learn it faster.

Yes, Kotlin targets JVM, Android, JavaScript, and Native. It does run on JVM.