Node.js 10 will go End-of-Life in April 2021, so we advise you to start planning to upgrade if you are still using Node.js 10.

Node.js community has declared this in one of the posts announcing the new release of Node.js, Node.js 15.0.0. Yes, Node.js 15 is released and this post talks about important highlights and updates in this new version.

Before we start discussing Node.js 15, one thing you need to keep in mind is – Node.js 15 will not be promoted to LTS (long-term support). Node.js 14 is the LTS version. The Node.js community encourages the use of the LTS release line for deployments. 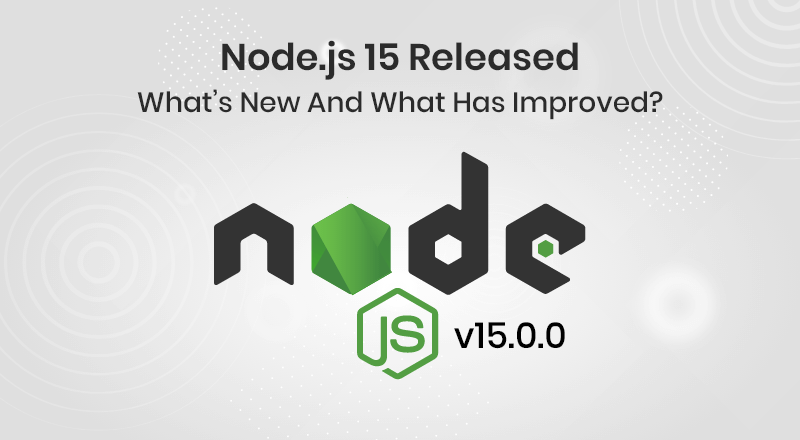 This new version of Node.js comes with a new release of npm 7. Apart from this, Node.js 15 is equipped with performance improvements, V8 JavaScript engine update, solved issues, and experimental implementation of AbortController and QUIC.

npm is a package manager for the JavaScript programming language. It is now one of the largest software registries with millions of developers and over 1.3M packages and 75B downloads a month.

npm 7 has many long-awaited features that include Workspaces, a new package-lock.json format, support for yarn.lock file, and automatic installation of peer dependencies. Significant internal changes of npm 7 ensure more codebase reliability and maintainability.

N-API is an API for building native Addons and is a part of Node.js. It is used to maintain stability across Node.js versions and different compiler levels. Node.js 15 ships with a new major release of N-API 7 with new features and additional methods for working with ArrayBuffers.

It is an experimental implementation in Node.js 15. It is a utility class used to signal cancelation in selected promise-based APIs. The AbortController allows developers to abort one or more Web requests as and when needed.

QUIC is a UDP-based network transport protocol for HTTP/3 that offers built-in security with TLS 1.3, multiplexing, flow control, error correction, connection migration, and so on. Node.js 15 comes with experimental support for this through the QUIC configuration flag.

QUIC is an experimental, general-purpose, transport layer network protocol designed by Google. It is faster, efficient, and similar to the TCP+TLS+HTTP/2 protocol implemented on UDP. It aims to reduce latency compared to TCP.

Node.js community is one of the strong communities with a constant chain of improvements, bug fixes, and plans to upgrade Node.js.

This latest version of Node.js, Node.js 15 has updated V8 JavaScript runtime support. It has been updated to 8.6 from 8.4 with many performance improvements and features.

The default mode for unhandledRejection is changed to throw from warn in Node.js 15. This decision is based on the results of the Node.js User Insights: Unhandled Promise Rejections survey and a Node.js Technical Steering Committee vote.

Last year, the ‘Next 10 Years of Node.js’ repository is created to work collaboratively on the direction and strategic decision to drive growth for the next 10 years of Node.js. As Node.js marks 11 years of its existence, it is interesting to see how the Node.js community sets the direction of success in the upcoming years.

Note: Node.js 14 is an LTS version and it continues to be supported until April 2023.

Now Is A Good Time To Upgrade To Latest Version:

As the Node.js community has announced the end-of-life of Node.js 10 in April 2021, it is a good time to start planning for upgrades and leverage performance benefits. Software upgrades are essential to unlock performance improvements and enable new features to be leveraged in the production environment.

Node.js 15: How It Has Improved Developers Experience?

Node.js made it happen to write server-side scripting in JavaScript. It is an open-source, back-end, and cross-platform JavaScript runtime environment used by a large number of companies. With asynchronous I/O and event-driven architecture, it makes real-time web app development easier than ever before. Node.js is preferred by the world’s renowned brands, Fortune 500 companies, startups, and mid-sized organizations. It represents the ‘JavaScript Everywhere’ paradigm for complete web development rather than using different languages for the frontend and backend.

Companies That Use Node.JS/Popular Node.js Apps

We have already written a post covering the top 20 apps that use Node.js. Easy scalability, modern architecture, speed, and high performance – are some of the major benefits of using Node.js.

It is recommended by the Node.js community to use even-numbered releases for production and odd-numbers for experimental and new projects.

Summing it up, Node.js 15 is worth giving a try. Share your feedback and contribute to making Node.js better in the upcoming time.