The world of technology has seen React as a highly popular technology and the developer community has been quite pleased with it. There are numerous applications being implemented with this well-known technology, thanks to its salient features such as virtual DOM, SPA, reusability, and simplistic coding.

But the way everything has an alternative, there are certain complementary technologies that can be used in place of React, owing to different reasons. Before we have a look at the possible React alternatives and React JS competitors, let us glance through the fundamentals of React.

React is a popular JavaScript library for building user interfaces. It is free, open-source, and has a huge community of developers to support it. When we wonder what is React used for, the answer is that it is ideally used as a stepping stone in building single page or mobile apps. It manages and maintains the view layer for mobile and web apps.

The world of React development follows the ‘Learn Once, Write Anywhere’ concept through which developers can create newer features in React without rewriting the current code. React web development makes it easy for developers to create interactive user interfaces, design simplistic views and render the appropriate components whenever data is altered. It creates encapsulated components that can perform their own state management and create complicated user interfaces. 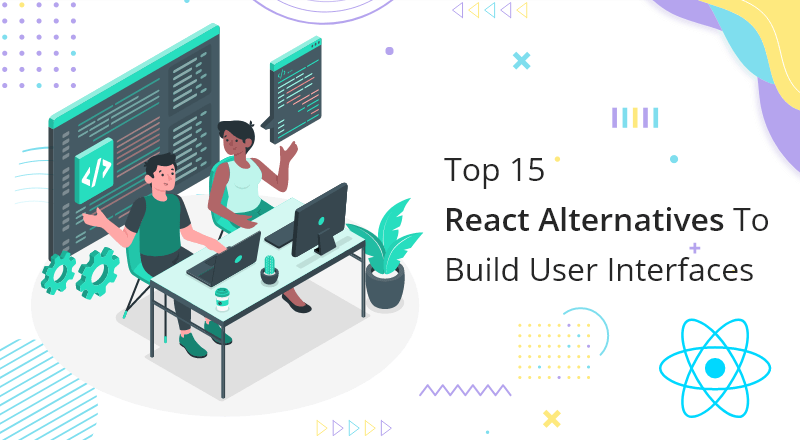 React software developers are usually quite satisfied with the React performance and results. However, there might be reasons like large library size, lack of MVC architecture, a sharp learning curve that may open the doors to alternatives to React. Let us have a look at the possible and popular alternatives to React JS:

Inferno JS is a fast, performance-driven JavaScript tool that offers a React-like library to create effective user interfaces. It provides the fastest runtime performance and is good at the isomorphic rendering of real-time data views. There is good support for JSX, hyperscript, Vanilla createElement processes. Also, for well-known state management libraries like Cerebral JS, Redux, etc.

It is lightweight, component-driven, and follows a one-way data flow architecture. It showcases React-like fundamentals, API and normalizes events for enhanced cross-browser compatibility. There is isomorphic rendering on the client and the server, and it supports earlier browsers with ease. It utilizes internal objects for optimization. There are add-on elements like server-side rendering, routine, etc.

Powered by Microsoft Xamarin is a free, open-source alternative to React, for creating native and performance-driven applications. It caters to iOS, Android, watchOS, tvOS, macOS, and Windows apps. It is a cross-platform implementation of the Common Language Specifications or Common Language Infrastructure (CLI).

Leveraging Xamarin with Visual Studio offers to build mobile apps without the knowledge of any tool or IDE. Xamarin is written in C#, and it uses a shared codebase. It has a native platform integration for iOS and Android, a set of diagnostic tools, application loader, Android SDK manager, Google emulator manager, etc.

Ember JS is a popular alternative to React that provides client-side rendering, templating structure and URL support. It has handlebars integrated templates that perform multiple events with lesser code and offers an automatic update as soon as the data gets changed. Ember JS offers a great deal of productivity for the developers.

Since it is API friendly and possesses all major idioms, it is of great assistance to developers in increasing the speed of development. Through Ember’s modern control system, developers can switch over to the latest updates. There is detailed documentation that explains details about tools and APIs to be used.

Flutter is a leading, open-source, user interface framework powered by Google. It is ideal to create visually appealing, natively compiled, and feature-rich applications. Developers can create cross-platform apps for the mobile, desktop, and web through a specific codebase. It is one of the fastest-growing tools for creating flexible and expressive designs.

Backbone JS is a popular JavaScript library that offers a structure to web applications by giving models with custom events and key-value binding. It has a RESTful JSON interface and depends upon the MVC design style. It is light weighted since it depends only upon one JS library – Underscore.js and certain jQuery elements.

Backbone JS is considered ideal for building single-page web apps keeping multiple pages in synchronization. Developers look forward to using it whenever they need to develop a simplistic framework with JS structure. It leverages a template engine to create a scalable user interface and helps develop a complicated user interaction with ease.

Vue JS is a simple yet powerful JavaScript framework that can effortlessly create faster and smarter apps, as a good alternative to React. It is flexible, developer-friendly, and faster than most peers. Application development with Vue is fast, simple, and flexible. It is user-friendly and hence novices have an easy grasp on its learning. It is module and light weighted as compared to React.

Vue JS is an open-source tool mainly targeted to develop single-page applications and their user interfaces. It works on HTML templates and hence is easy to use. It has a flexible integration procedure that does not affect the entire system. It has a smaller library in size and gives an enhanced performance.

AngularJS has been assisting in structuring and simplifying the JavaScript code. It helps in creating an application or website-based single-page application that has user interaction. It loads all new pages from the server and rewrites the existing page dynamically. It empowers developers with advanced tools and frameworks to create scalable applications.

Preact is one of the fastest V-DOM libraries with a simplistic implementation with precision and compactness. It offers the thinnest ever Virtual DOM abstraction and is created based on stabilized platform, real event handlers. It can be leveraged directly through the browser and as a fast JavaScript library, it is ideal for creating websites.

There is good support for most modernized browsers. It showcases salient features like linked state, props, and states rendering, utilizing class instead of className. It is a light weighted option to the React library to create mobile/web applications as well as progressive web applications.

Aurelia is a popular technology that offers seamless integration of applications with web components. Written using ES2016, it has been depending upon polyfills and no other external factors. It is considered a powerful tool to create web, mobile, and desktop applications. It has a collection of feature-rich JavaScript modules, written in JS and TypeScript.

Aurelia is created with smaller chunks of environmental modules and applications can be built by selecting desired modules. There is availability to two-way data binding and its extensible HTML compiler permits the creation of customized HTML elements, generates control templates, and connects newer behaviors to current elements.

Riot JS is an elegant and simple UI library, that is component-driven. It is tiny in size, has a virtual DOM that is like React but faster, and has an elegant API and enjoyable syntax. It offers customized tags that help in creating complicated views with HTML. It does not need any extra HTML root elements, fancy data/custom attributes.

It is liked by developers since it helps create effective user interfaces with a custom tag that has an interesting yet simple syntax, making it easy for novices. Even though the library is small, there is an effective output that it offers with the least possible amount of DOM updates.

react-lite is just like a subset of React, a parallel implementation of React optimized for a smaller script size. Like a lighter version of React JS, developers can replace React with react-lite in a flexible and comfortable manner. This lessens the JavaScript bundle size by a great margin. It is more like a reimplementation of the React components.

While using react-lite, there is no compatibility package needed. It can be implemented directly through webpack alias. There is a lot of compatibility that it holds with other React components. It does not support server-side rendering or client-side hydration. It utilizes React DOM servers for feature operations.

The main concept of Cycle.js consists of drivers, functions, and streams. It follows main (), driver, and run (). Through this tool, the application is described as a simple function that takes an event stream as input and output both. It offers a predictable code, is simple and concise, extensible, and testable.

Svelte is a well-known, free, open-source compiler to create user interfaces. It does not include a framework script and produces cybernetically improved web apps. It shifts its work into a compile step that occurs as the application is getting built. It does not do the work in the browser just as its peers do. It updates the DOM as soon as the application state undergoes a change.

It offers better reactivity, scalability, speed. It is lightweight and leverages existing JS libraries. It writes the code to change the document object model in synchronization with the application state. It is ideal for small applications and smaller teams. There is no virtual DOM, it needs less code to be written and there are no complicated state management libraries.

Mithril js is a modern-day, client-side, JavaScript framework to create single-page apps. It is tiny in size and has fast performance. It has good support for modern browsers and offers routing and XHR utilities. Developers can easily learn routing, components, and XHR in less time to start creating apps.

It is easy to learn, loads very fast, has a smaller API as compared to its peers. It uses the virtual DOM and hence its templates get compiled first. It offers Flux compatibility, trustworthiness and is completely impartial. There is a creation of components through the required view property and through a possible controller.

Vanilla JS is a JavaScript-based library/framework that uses plain JavaScript without any other library like jQuery. It has been termed as a user-friendly tool after the Selectors API updates have been implemented. Developers can now include code for features that aren’t much needed or needed later.

The term Vanilla indicates the pure form of JavaScript that has been used in this technology. It is ideal in the case of small and simple applications where the code is not too complicated. It offers faster adoption of libraries and frameworks since the ability of developers to adopt newer technologies increases in speed.

React Alternatives – Wrapping It Up

React software development has been a popular choice for varied sizes and segments of business, especially since it is an open-source front-end JavaScript library. The above popular alternatives to React JS are competent to perform all major features that React offers.

Finally, it depends upon important parameters like skilled resources, budget, timelines for delivery, project requirements, and technical parameters like API, package size, ecosystem support, stability, and performance that help in deciding which alternative to React to choose. 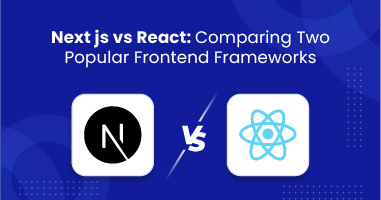