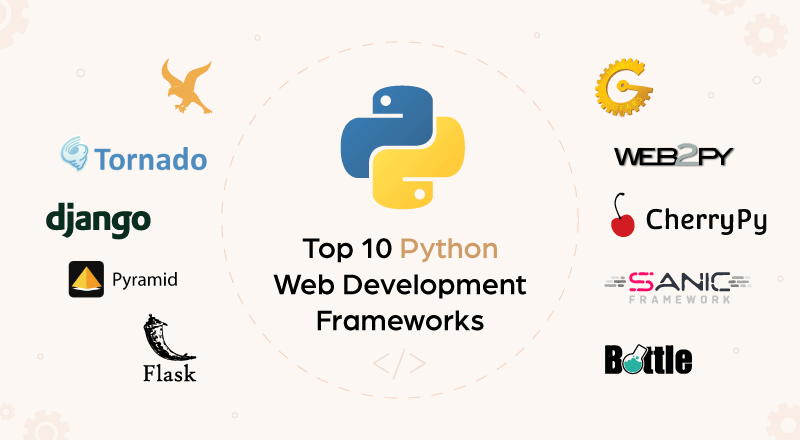 The website is a representation of an idea, and an asset to a company. And building it requires a framework that matches its size and complexities. It is important to know each and every framework and its set of advantages it brings along.

Also, choosing the right fit for your project could be a tough task. But what if a single programming language that is versatile, high-level, tops the chart of popularity and most importantly has numerous frameworks that can prove to be a support for web-app development.

Today we are going to discuss Python frameworks and its role in constructing websites. But before that, let’s understand Python programming language and its demand.

Why Python Is So Popular?

Python has been ruling the web-app development market for decades, and now it is one of the most sought-after programming languages. There are tens of thousands of developers and beginners, who want to learn Python and kickstart their careers in it.

According to the 2019 search results on Google, Python and its related searches like “What Is Python Programming Language?” have outnumbered some of the most popular celebrities searched on google.

Even in 2020, it has topped the charts in terms of popularity. GitHub, a software hosting platform, has conducted research that shows around 29% of search tutorials are held by Python.

Python is growing at an exponential rate and that proves the worth of investing in it. It has beautiful frameworks that provide structure to the ideas of startups, businesses, and brands. Be it a simple and small or giant and complex, this programming language is ready to cater to all the requirements.

Also, Python is one of the programming languages that take charge of building everything; right from web-apps to cognitive technological apps and business apps to software development.

And to build these apps and websites, it requires frameworks that easily code and allow the developers to focus on the logic of the project by streamlining the unnecessary part of development.

Numerous frameworks are categorized into three different types that sort them out as per the requirement. The acknowledgment of different types helps in selecting the appropriate framework for building web applications.

Basically, Python frameworks can be classified into three types:

The full-stack Python frameworks are the ones that take complete development responsibility; from the client’s end view to data management, and many more things.

Also, the full-stack frameworks come with supporting elements that include form generators, form validations, and template layouts. And not only necessary elements, but it is also loaded with tools and packages such as:

These tools and packages function as a helping hand for the developers. By including them in the software development process, one can rest assured with streamlining routine elements and focus more on the logic of the project.

An ideal solution for the one who wants to closely work on the project, i.e., the one who has a habit of manually adding the features to beautify the project.

Undoubtedly, the micro-frameworks are not compiled with elements, tools, and packages that are built-in advantages for the full-stack frameworks, but what stands micro-frameworks apart is its flexibility in selecting the elements for building software.

Micro-frameworks are lightweight and a perfect fit for apps that doesn’t require coding. This boosts productivity as well as development time, resulting in quickly launching of the product.

A new and innovative subset of micro-frameworks known to be handling simultaneous operations in bulk is called an asynchronous framework. The primary objective is to run multiple threads in accordance with, along with the main thread, and also notify the main thread on the completion or failure of the function.

It uses non-blocking sockets and Python’s asyncio libraries to write concurrent codes by using async syntax. Also, these libraries are a source of async frameworks that offer an amazing performance network.

Now that we know how are the frameworks categorized, let’s understand in-depth about the popular python frameworks:

Django is an open-source, high-level, full-stack Python framework that deals with developing simple to complex web-apps. Just like Python, it is versatile, scalable, and flexible. Also, it agilely builds software that is another added advantage of it.

Moreover, the framework adopts a pragmatic approach and follows the DRY (Don’t Repeat Yourself) theory. It is not only limited to theory but has also widened its scope to follow model-view-template architectural patterns.

Apart from this, it is heavily loaded with tons of built-in libraries and can also cope up with third-party libraries. Many big sharks have invested in Django after looking at its outstanding features:

Many big brands put their trust in Django and the reason for trusting is its constant support to robust databases such as MYSQL, PostgreSQL, Oracle, and SQLite.

Flask is a Python framework that focuses on building robust web-apps.

The Flask framework has a built-in server and debugger and that runs the application and can process multiple users’ requests at a time.

Also, being a micro-framework, it lacks database support but the developers have already made arrangements for it. The framework has an SQLAlchemy package that connects the apps to the SQL database with the help of the database URL.

Talking about the support for the flask app’s production, it is dependent on the WSGI toolkit and Jinja2 template.

Flask gives a tough competition to Django and that is what stands it apart from others. This may be one of the reasons for many big brands like – Airbnb, Netflix, Lyft, Reddit are putting their stake in leveraging Flask

In a simple language, Web2py is an ocean of technologies. It has everything that one wishes to have while developing projects. It is a full-stack, free-to-use, and scalable Python framework.

It can swift deploy the website with one click with in-built IDE support and can edit and debug the apps whenever required. Not only IDE, but it can also build hybrid apps and can maintain it without external support.

Apart from building and maintaining, it can robustly perform testing as well. And the built-in ticketing system, that is something incredible, it detects and shows errors that are occurred while developing the app.

Furthermore, it stands first in providing security to the applications from vulnerable attacks as well. And not only security but it also encompasses algorithms such as MD5 or HMAC + SHA-512 hash that protects the stored sensitive credentials.

CherryPy is a micro-framework, open-source, object-oriented Python framework that follows a minimalistic approach. Upon the approach, it comes with an HTTP/1.1-compliant WSGI multi-threaded web server. The applications that are built using the CherryPy framework are standalone Python apps and does not require an Apache server to run the apps. It means it can run on all Python OSes such as Windows, Linux, macOS, etc.

Furthermore, as CherryPy owns a multi-thread server, it gives tech experts liberty to run multiple servers at a single point of time. And it comes with tools for caching, encoding, authorizing.

Unlike other web frameworks, TurboGears is an excellent, data-driven, open-source Python framework that rapidly constructs applications. This framework stands apart in leveraging components such as WebOb, SQLAlchemy, Repoze, and Genshi.

These components help in rapidly building apps that need database connectivity. Also, the framework is compiled with templating that bolsters object-relational mapping (ORM). it turns out to be one of the leading, a flexible, and extensive web framework that flawlessly launches web applications.

Bottle is a small-scale web app framework that is only dependent on Python libraries. Initially, it aimed to build only Web APIs but gradually, it has stepped into rapidly developing micro applications.

Also, what sets Bottle application apart from others is it works on a single source document. Another feature of Bottle is it ensures the swift working of developers with hardware.

It is embedded with shining functionalities such as templating, directing, utilities, and fewer fundamental abstractions over the WSGI standard.

A fully-stack and potential web app framework that can be utilized for developing easy simple as well as complex software. Pyramid turns out to be one of the most favorite web frameworks for developers.

Its versatility has gained a lot of attention and that has sprouted up the demand for this Python web framework.

Also, the transparency and quality building of web applications is another benefit that contributes to the popularity of the framework.

Many big sharks such as Mozilla, Dropbox, SurveyMonkey are set examples of Pyramid Python web framework.

It is an asynchronous web app framework that is open-source and agilely handles numerous operations. It is built on top of uvloop and got the name from its one of the key features, i.e., processing HTTP responses via async request handling.

Also, it offers hassle-free capabilities and faster speed and this compatibility come by comparing it with Python 3.5 await/async functions.

Tornado is a classic example of an all-round solution for developing bigger and complex structures, and that too within a short period of time. It has got everything that is necessary for building a website such as a Database support, HTML Templates, URL Handling, and many more things.

Also, it focuses on non-blocking operations and can handle numerous open connections. It is capable of handling 10K connections at a single point in time. It is an ideal asynchronous solution for heavy performance-based apps with ample users.

Falcon is another micro-framework that swiftly builds web APIs. Also, it can build HTTP APIs without loading dependencies in a huge quantity. Another advantage of Falcon is a cleaner design, which bolsters HTTP and REST architecture.

Unlike contemporaries, Falcon has turned out to be an effective framework that processes ample requests leveraging the same hardware. It aims for maximum code coverage and is a perfect match for medium as well as large applications. And that turns out to be the first choice for big sharks.

Good Read: Python vs Java Comparison – Who Is The Better Of The Best In 2020?

There are numerous Python Frameworks to choose from, and the list is never-ending. These are the top 10 frameworks (best python web frameworks) with their outstanding features that drive the construction of web apps. And these are categorized into three different types that one should be well aware of.

Choosing from the list of Python frameworks can be a  difficult task but it entirely depends on the requirement and within how much time you want to build your project.

Hire Python developers or choose from among the leading python development companies to get the most of your projects.

Every framework has its own merits and demerits, uniqueness, personality, and various factors. So take your time, do your research, make comparisons, educate yourself, and then decide.