A rising programming language in the IT scenario, one of the most popular amongst the developer community – Python needs no introduction. Python programming has been in demand and so has been the demand for skilled Python developers. Simply learning Python may not suffice for a developer, understanding Python in detail, learning about the roles and responsibilities, skills, and salaries are important too.

Here are some statistics that assure you of the growing popularity of Python:

Python is one of the official languages used by Google!

Before we plunge into details of what Python developers do, let us quickly take a glance at the technology itself.

What Is Python Used For?

Python is used in different areas of application development like- 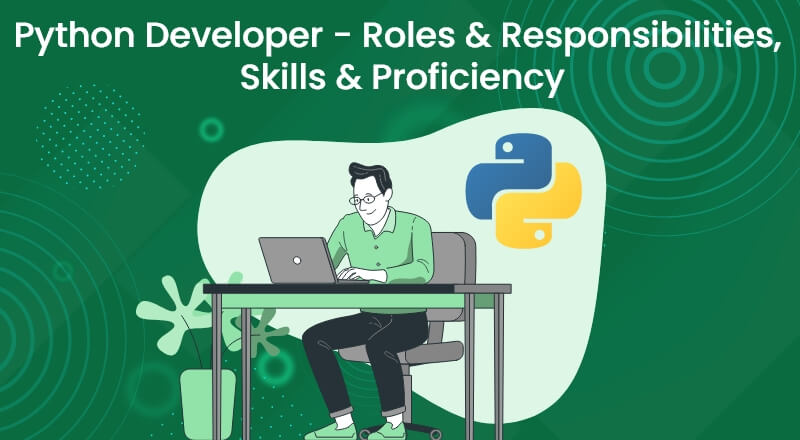 What Is Python Developer?

A Python developer could be a software developer, web developer, data analyst, data scientist, automation tester, machine learning engineer, AI engineer – anyone of these with in-depth proficiency in Python. It depends upon the need of the project as to which role takes up the job of coding in Python.

Software developers in Python are supposed to manage the data interchange between the users and the server. They must develop the server-side logic assuring high-end performance. They must know the frontend technologies, integrate their work with the Python application, and develop the backend components, connecting the applications with third party services.

How To Become A Python Developer?

The career path to becoming a successful Python developer is an interesting one and there are hordes of developers looking forward to it. Do you want to know how to become a Python Developer and develop a career in it? Here are key tips that can help in doing so:

Though these may just give you an idea, here are few interesting reference links for getting an idea about the pay scale that a Python developer may get:

The average Python developer salary in the US is $79,395 per year – Payscale

The national average salary for a Python Developer is $76,526 in the United States – Glassdoor

Python is one of the most leading programming languages and hence is surely a great skill to possess as a career option.

Python developers are much in demand since this language has been a preferred choice by many, across the globe.

Python developers have a bright future and can build a good career in the areas of data science, ML, AI, data analytics, etc.

The best way is to contact experienced IT solutions and service providers so that they can offer the best possible resource. There are many good sites where you can find freelancing Python developers like Toptal, GitHub Jobs, Stack Overflow, Hired, etc.

Yes, certainly, becoming a Python developer is a good career move since it is quite rewarding and has a great market demand in the IT industry.

Good Read: Python vs Java Comparison – Who Is The Better Of The Best In 2020?

As Python Developers Rise In Demand

Python is a rapidly expanding, continuously developing, and general-purpose language which is preferred by the world’s renowned enterprises. From startups to giant organizations and from web development to automatic scripts, Python developers have been tackling the challenges of today’s digital world with their proficiency and capabilities.

Owing to its salient features, Python has emerged as the first choice of developers to create dynamic web applications, data science applications, AI & machine learning projects, and next-gen digital products. The year to come shall witness Python development as one of the most desired programming concepts and an upsurge in the demand for Python developers.