Flutter 2.2 Is Out – Here Is Everything About It

In the world of cross-platform app development, Flutter has created its own supreme reign with effective Flutter app development services. It continues to allure its user community by continuously updating its features and coming up with the latest releases. The most recent release is Flutter 2.2, which got announced with pomp and fanfare at the Google I/O 2021 event.

Google I/O, the organization’s annual developer event is back this year in a digital fashion. The three-day conference was from May 18, 2021, to May 20, 2021. And the announcement of Flutter 2.2 was a special highlight.

Before we go into details of what newer features have been announced for this latest version, let us quickly go through Flutter’s previous big release – Flutter 2.

The Flutter community has always been a progressive one and on March 4, 2021, came Flutter 2.0. It was announced by the community in a Flutter engage event organized by Google. It comes with a lot of support for multiple platforms, high-end production support for the web, and many performance enhancements. 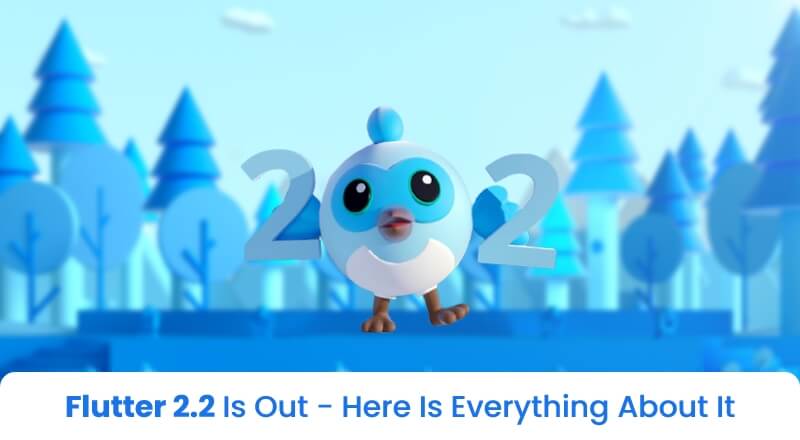 Here Comes Flutter 2.2 – The Latest To Join The Bandwagon

Flutter 2.2 is based on the foundation of Flutter 2 and with it, enterprises and startups, alike, will be able to create effective solutions across the market, fulfilling their organizational requirements with ease. This latest release focuses on enhancements to the developer experience in terms of more reliability, performance, and customer satisfaction. It is more of a service update, with a stringent look for stability and fine-tuning of current features rather than adding new ones.

There is a new guideline on how best to support different kinds of platforms through a unified source codebase. All these features are present in stable and accessible production apps.

There is an increasing number of Google-based products that have been leveraging Flutter and that has been highlighted in the I/O conference.

Here are the key highlights of Flutter 2.2.

There are certain improvements in the performance criteria with this latest release of Flutter. Web applications can perform background caching with the help of service workers, Android and iOS developers can avail certain specific features with which performance will be bettered.

There is a DevTools suite that can enhance performance through a specific set of features that will better memory allocation during runtime. Basically, all improvements are focused on offering users a faster application loading experience with better performance across different platforms. There is an addition of support for third-party extensions that has earlier been shown by peer organizations involved in Flutter development.

The newly arrived ads SDK now completely supports null safety that assists developers to prevent null exceptions. It also supports adaptive banner formats, with an updated plug-in and relevant codelab. Null safety will be enabled, by default, for newer projects. This addition of optional null safety will help developers in becoming more confident with the application code. For this, there are over 5000 packages on Dart’s ‘Pub’ package manager, that have been converted to null safety.

Google is the backbone behind Flutter and with Flutter 2.2, the bond gets stronger. The organization has come up with a new in-app payment plug-in in connection with the Google Pay team. This will facilitate users to process the payment smoothly from within their apps. The same experience will be displayed for Apple Pay for iOS users. This release is assisting in letting developers feel that there is a larger connect of apps with the Google ecosystem, with more collaborations with various partners.

As with all Flutter releases, this release also showcases the most recent Dart update. Dart’s latest version – Dart 2.13 has shown its assistance for native interoperability and type aliases. It also shows support for packed structs in foreign function interface and arrays, with an interface for communication with legacy C code. There is also the inclusion of backing for type aliases that helps in making code highly readable and simpler to refactor. Flutter 2.2 is now bundled with Dart 2.13 that is also available for a separate download.

Flutter, not only supports the creation of apps with different platforms or form factors like mobile, tablet, desktop, it also caters to various input types and platforms like system menus, navigation drawers, etc. The new version now can be used to create platform adaptive apps that can easily adjust to the details of various target platforms.

Flutter’s latest stable platform, the web has been enhanced with the new release. Caching behavior has been optimized with a novel service worker loading mechanism. Web renderers have been improvised – addition of support for font features for HTML, using canvas APIs for text rendering, support for shader masks, use of opacity masks for transition performance. For better accessibility, semantic node position has been bettered to lessen the gap between desktop and mobile web apps.

Text handling did not ask for more importance in earlier versions, but with desktop form factors, this release figures out newer ways to handle text input. It offers features like cancel a keystroke, customizes keystrokes associated with text actions, etc.

Usually, scrollbars are never seen by default, in iOS and Android apps. For a desktop app, it must occur automatically when the content is huge and hence a widget must be added. For the apt occurrence of the scrollbar, in desktop apps or on mobile apps, this latest release of Flutter has come up with an automated addition of the Scrollbar widget whenever necessary. This helps users to incorporate that feature automatically.

Earlier, mouse cursors like hand could be added over widgets. But, if users need to run various text spans with different styles, it was not possible. Now, with Flutter 2.2, users can automatically get the needed mouse cursor, whenever there is a TextSpan with a gesture recognizer.

Through this release, page transition in Cupertino has been made smoother by lessening the time taken for rendering the frames. The development and end-user performance both are sure to improvise. Incremental iOS installs have been implemented which will reduce the time to install and turnaround time to test.

There are two different PRs adding new Material icons to this latest version of Flutter, which has an icon for Dash. The desired Material icon can be searched for, through names and categories, in the icons’ library. The addition of Dash to the Flutter app has become much simpler and easier.

There Is No Looking Back For Flutter!

Owned by Google and looking at the way Flutter and its powerful community offer key enhancements on each release; it is interesting to see what the next release will have in store. Being one of the fastest-growing developer communities across the globe, there are numerous applications, and all apps get a free update to Flutter 2.

You can reach the latest release by upgrading the current Flutter installation or by starting a new installation.

With each appended release, Flutter is successfully expanding its user horizons and fan base. The user community is thrilled to leverage the key potentials of Flutter and the latest release – Flutter 2.2 is proof enough for that!